What is causing whistling from shower head (shower stall w/o bathtub)?

In the master bathroom on the second floor, there is a shower stall that does not contain a bathtub or diverter valve. The shower stall only contains a knob to turn the shower on, and then the shower head itself.

When I turn the shower water on, I can hear a whistling noise, and its volume changes depending on the position of the shower head. (The shower head does not have a rotatable head that changes the spray pattern. By “position of shower head,” I mean that when I move the shower head left or right or up or down, it can change the volume or pitch of the whistling.)

Also, with the shower running, if I turn on the HOT water to the sink in the same bathroom, the whistling changes (I can't really discern whether the volume increases or decreases).

What could be causing the whistling? (The shower head is a higher flow variant from which I removed the internal restricter. It's less than a year old. I already tossed the original that was on it when I purchased the house.)

If you have hard water and don't have a water softener, the noise could be attributed to water pressure building up because the shower head is clogged or has calcified as a result of the minerals in hard water. Removing the shower head and soaking it in white vinegar can help remove those deposits. While the shower head is off, turn on the cold and hot water to clear out the shower arm of any debris that could have built up. Then, reattach the shower head, turn the shower on and listen again for the sound.

If you still hear the whistling noise, it could be time to have a plumber replace the stem or cartridge in the shower valve, which is what controls the operation of the shower, and the pressure and temperature of the water. It's not uncommon for plumbers to also find unusual items in shower valves, from rocks to screws. Those certainly can contribute to a noisy shower. It could even be an issue with your shower cartridge, such as a loose washer.

It also could be the pressure- balancing valve, which is incorporated with the shower valve and helps regulate pressure and temperature. The pressure balance valve's "mixing" spool can flutter as water passes through it. Turning the valve to hot and then to cold once or twice might help stop the whistling, or fluttering.

The whistling sound also could be attributed to a large volume of water traveling through the bends in your pipes. Replacing the shower head with a low-flow unit could solve your problem. –How to stop a shower from whistling, –www.kentucky.com

Try putting a few screens where the water-saver was, to restrict it somewhat but not like it was when it came from the factory. Sometimes when you totally remove these, the flow gets all wack. Next time try to disassemble the water-saver; remove that little O-ring, but keep that part with the eight or so holes in it, in there. E.g., 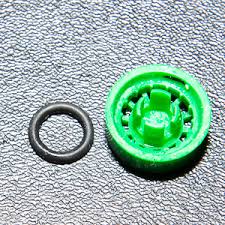 They sell replacement water-savers. You will probably need to pick and choose which parts of it you install, to preserve good flow.

1
My shower doesn't turn on when I turn the diverter
3
What is the point of a shower diverter?
2
2 shower heads and 1 rain head...low flow
0
Why did the water pressure in my bathtub change but shower is fine?
0
Shower head not working with hot water
1
How to address diverter pipe length issue during shower remodel?
0
Water coming out of shower head without using the diverter
0
Shower diverter turns but doesn't divert
1
Possible reasons for shower to go all hot or all cold?