How to finish the broken edge of my exposed brick wall?

I'm in the process of exposing the brick on an exterior wall around some newly installed patio doors. The majority of the brick work looks fine, the problem is the edge of the wall where the brick looks like it's been cut by a blind man with a sledge hammer. It's next to impossible to clean (I've only done about half so far), cleaning brick is hard anyway but I can't even get to a lot of the broken edges with the chisel and wire brush I'm using.

The plan is to do as little as possible to wall once it's been exposed—ideally I can just seal it and I'm done.

Is the brick (the broken edges specifically) going to be ok if I clean it up, remove everything that's loose and seal it as it is? Maybe since the brick is so broken anyway I should just have at it with my chisel to smooth off the worst bits?

Another problem it's left me with is the big gap between the brick and the patio door (probably 2 ½ inches at the worst areas), what's the best way to fill the gap? 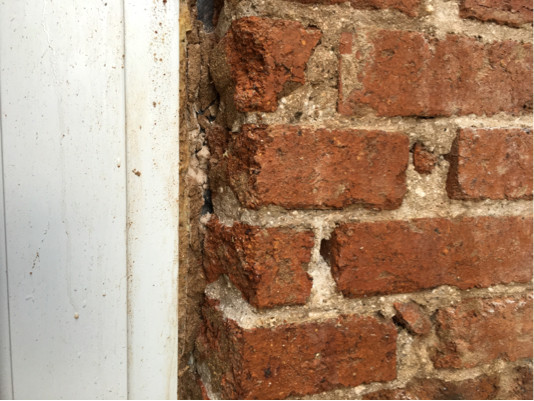 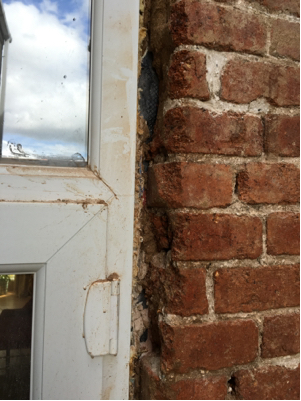 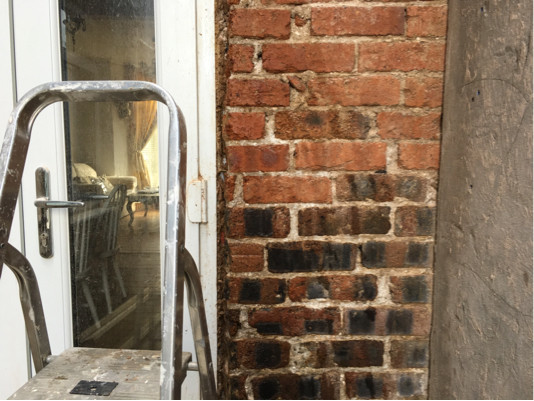 I would consider putting molding around the door and turning over the face of the brick. I would use a jamb-like board perpendicular to the wall and the door, and make its width flush with the face of the brick. Then add a small flat board parallel to the wall overhanging the door side of the jamb by about 1/8 inch and the brick just wide enough to cover the broken edges (maybe 1 1/2 inches). Paint it to match the door and it will look like part of the door frame.

I would fill the gaps between the door and brick with exterior foam sealant. Just be careful since this expands and you don'r want so much that it warps the door frame. Apply it, trim it flush, then do the molding.

Not the answer you're looking for? Browse other questions tagged walls brick or ask your own question.

3
Concrete slab at a brick wall
2
Improperly installed or nonexistent brick ties in a wall
1
How feasible is a brick veneer fake wall?
1
How to clean textured brick fireplace?
1
Should I seal a brick chimney breast on party wall
2
Anchoring shelves on hollow wall backed by brick
1
Best approach for smoothing brick
1
Concrete floor brick wall gap leaking severely (garage above basement)
0
How to mount TV on brick