I am looking for advice on how to go about digging fence post holes 42 inches down (to exceed 40 inch frost line) safely.and properly.

I was told that I must manually dig the hole within 18 inches of any marked utility lines. I have these utility boxes in the back corner of my lot (3 of them) as well as drainage sewer my sump pump drains into.

I am confused on how to dig the hole. Some people say use a post hole digger, and others say use a spade sliding along the top horizontally rather than vertically. If I use a spade and dig a trench 42 inches down this seems like a lot of work, and also how would I back fill the hole properly. I plan on using tamped crushed rock for the back fill. Would I have to make some sort of square form to back fill the earth in and fill the post hole properly? Does square vs circle surrounding make a difference? If I used a the post hole digger, how do I safely cut into the ground without worrying about cutting into the line? I feel like I can go slowly, but I don't want each hole to turn into a 4hr project a piece!

Any advice would be great as this is my first time putting up a fence. I don't mind the leg work/labor.. I just want to do the job right and maximize the real estate of my backyard without giving it away to my neighbors.

Also, how deep is the sump pump line usually? The only marking I have of it is from the plat of survey showing it running just past the utility boxes near the property line.

To follow up, I ended up just paying a fencing company to do it. So the headache and stress became their problem. Plus if I hit the line and hurt myself or had to pay to have it repaired it would have negated any savings of doing it myself; it didn't seem worth the risk.

The crew got nice and close to the property line, and hand dug near the proposed marked lines. They only went 36 inches down though in those areas, and never came across any lines. Although CAUTION should always be taken for anyone digging as all scenarios are different.

So I guess the answer is, as a DIYer you have to weigh the pro's and con's of the risks. In my case the con's began to outweigh the pro's and paying a company was better for me as I ended up going with a nice white cedar fencing with 5/8 thick and roughly 6 inches wide pickets. I used an oil based stain called, "Ready Seal" which I brushed on for a nice, thick, coat, and it turned out beautiful.

Had I done it myself, I was going to use the pressure treated cheaper material, which wouldn't have looked as nice. Also, I started to brainstorm workarounds trying to avoid the buried wire, and there were too many exceptions.

When digging near other connections, or utilities, consider using a pressure washer to dig! It works amazingly. Its messy though. We used a gas powered pressure washer, and even in our hard southern Arizona caliche clay ground, it was much quicker than any digging other than the ditch-witch for the trenches NOT near any critical utilities. 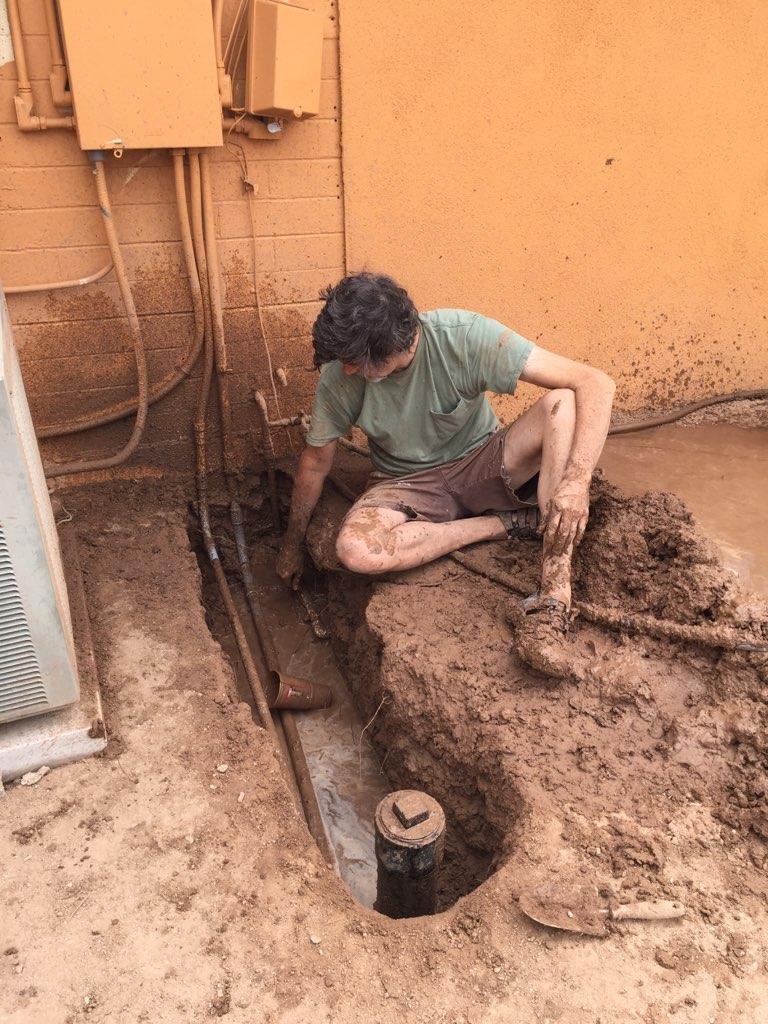 If it were my property I'd either offset the fence line 5' into my property and work cautiously because utility marking can still be missed. If you have your fence over top of the utilities there may be issues when they come to do work on the lines; they will destory your fence because you're within their right of way.

The other option I'd look at would be to use a very shallow base in that area. You didn't specify what type of fence but most of them will handle a bit of frost heave and survive. Take a look at the sidewalks in your neighborhood, those are shallow foundations that don't go more than about 6 inches deep. If the sidewalks are in decent shape (will you really notice if one fence post is 1 inch above the next post?) then you could go with shallow bases. A possible solution would involve digging below the topsoil with a spade shovel, flatten it and place a deck block and mount your post to the top. (similar to http://www.lowes.com/pd/Concrete-Deck-Block-Common-7-in-x-11-in-x-11-in-Actual-7-125-in-x-10-375-in-x-10-375-in/50113084)

I would call the utility company back out and have them walk with you over your proposed digging site. I'm sure they will assist with hole placement.

Not the answer you're looking for? Browse other questions tagged safety fence utilities or ask your own question.

14
Should I attach the fence post(s) where my fence meets my house? How do I do it?
4
Do I use dirt or gravel to fill around a cement form for a fence post?
3
Should I use concrete for a 2" square metal fence post?
3
Gravel under vinyl fence post in clay soil?
0
How do I dig a fence post hole in a cramped corner?
7
Setting fence post in gravel/backfill?
12
Can I have utility location done well in advance of a fence project?
3
What is a suitable post hole depth for a 4' fence?
0
Direct Burial high voltage lines in path of where I need to put fence posts