I have an older bathtub with a "plunger drain" setup like this: 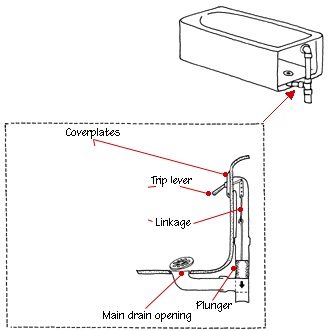 I can see the very top of the plunger's linkage assembly (it must have become detached from the trip lever linkage at some point, and sit's much lower in the drain now) and it has an "O" that I can get a hanger or hook around with some work.

The issue is that the plunger won't budge. It's almost as if it's lodged or rusted tight. When pulling with a coathanger bent into a hook, it takes me pulling so much that it unbends the hanger without moving. I don't feel any noticeable sign of give or wiggle.

Unfortunately, the drain opening is not an open drainpipe (it's some kind of closed stopper valve) so I can't try to do anything through there.

Is it likely that the plunger, itself, is jammed in there? Or, perhaps it's rusted? I considered throwing some DW-40 down there, or something to see if it might loosen. But, I figured I should ask first. I'd hate to open a wall, since it backs up to another shower, requiring me to demolish the siding to get access.

I would stay away from the acid because it can also eat your metal pipes. If the drain hasn't been used for years it is possible that it's rusted in place. I would try CLR as mentioned above. The balloon trick is clever. Slow process but it MAY work. Most older drains are brass and the stopper is also brass. Corrosion is more likely the culprit. Once you get it free you can pull the entire assembly out through the overflow hole to clean or replace it. Good luck!

Not sure if you still have this issue, but WD-40 is more of a cleaner than a lubricant (even though they're known otherwise). Usually you'd want to use PB Blaster (or other penetrating oil) in that circumstance.

To remove the plunger assembly, you can often times turn it counter clockwise, there will sometimes be a thread sticking up that the plunger attaches to. If that fails, a last ditch effort may be to drill into the plunger to have a way to pry it up, and then replace what you can later. I'm assuming you can't get at the underside, and you said there was a shower along the other side. If these are just showers (not bath tubs), then you can probably find a grille to fill in where the plunger was, as you won't need that for a shower.

Pictures of the issue would help quite a bit, however.

If the tub is blocked, then any CLR you put in the tub will be able to work on the plunger. but in general you will have to slowly drip the CLR over the stuck section, which will take a long time.

Something faster than CLR would be concentrated sulfuric acid drain cleaner. This is a unrefined acid, in a plastic bottle that feels like it is made of liquid lead, very heavy. I haven't seen it is a long time, but I used to see it in the stores in the 1980's. It was sold as drain cleaner, and was probably pretty hard on pipes, and people... so if you find it, be careful. Muratic acid may work as well.

Because it is in a drain, you loose the chemical as fast as you pour it in. One way around that would be to temporarly block the drain. Take a baloon, and some aquarium tubing, and a rubber band. Attach the baloon to the dnd of the tube, and inflate the baloon slightly to block the drain, and pour your acid of choice in. The acid may destroy the baloon, but at least you slowed the acid long enough to expost the plunger. Rinse and repeat as needed. Eventually you will either loosen the plunger, or decide it's time to open a wall behind the tub, or bust the tub up and remove the while thing, and start over.

Keep yourself protected from these acids. The sulfuric acid is extremely dangerous, and could come spewing out if it finds something fun to react with, so move slowly, carefully, and wear lots of protective gear. Keep a bucket of water with a large box of baking soda mixed in it for a rapid acid neutralizer ready before you open your acid bottle. Be ready for the worst, but stay safe for the best results. Work with a buddy, and keep the buddy out of the room but close by in case you need him to rescue you. Work out a rescue procedure in advance.

You're making the wrong assumption. You do not move the plunger up but down to stop the drain, your picture shows this. So you don't pull the stopper up to fix it.

Fixing the linkage should be possible through the hole the lever goes threw. Just hook new linkage from leaver to hole in plunger. Most hardware stores will have a kit of tub linkages or can order one for you with replacement parts. There will be instructions with most linkage kits.

Hook the linkage back up, lift the lever up, it pushes plunger down to stop drain. Put a little water in tub, then see if it leaks fast or slow. If slow, your done, as these type drains always leak a little bit. Now if the water goes out fast then you need a new plunger which means you need to replace the old one.

Best way and cheapest to get at these things is through the wall on the back side of the tub. Measure from side walls to find location of the center of the tub on other side of wall. Then cut the drywall in the middle of a stud to each side of the location. Then replace plunger or drain assembly on tub depending on condition. Then you can screw your piece of drywall back in place. Slap a little spackle on to cover the cuts and screw holes. Paint and your done.

Now if you can't get to the tub from another room/closet. Then I'd live with a rubber plug on a chain until you can afford to get a plumber to pull out the tub and redo the whole thing.

8
How do I retrieve a detached plunger from a bathtub drain?
1
What caused a stuck tub drain stopper linkage and how do I fix it?
3
How can I move a tub drain plunger, if the linkage chain is missing?
1
Stuck tub drain
1
Plunger doesn’t stop all water
2
Unable to remove push-pull stopper from tub drain
1
Standing water inside tub drain
1
Pulled a lot of stuff from Bath tub drain, now the clog is even worse!
0
Tub drain wrench doesn't fit