I basically made this machine referencing two videos:

Mine is a tiny bit different than both but same basic design. It's basically as compact as the first one but uses simple items like the second one.

I had also built a 10ft long, 8ft wide, and 10ft tall structure that contains several workout items that I can swap out with carabiner clips attached to eyehooks. 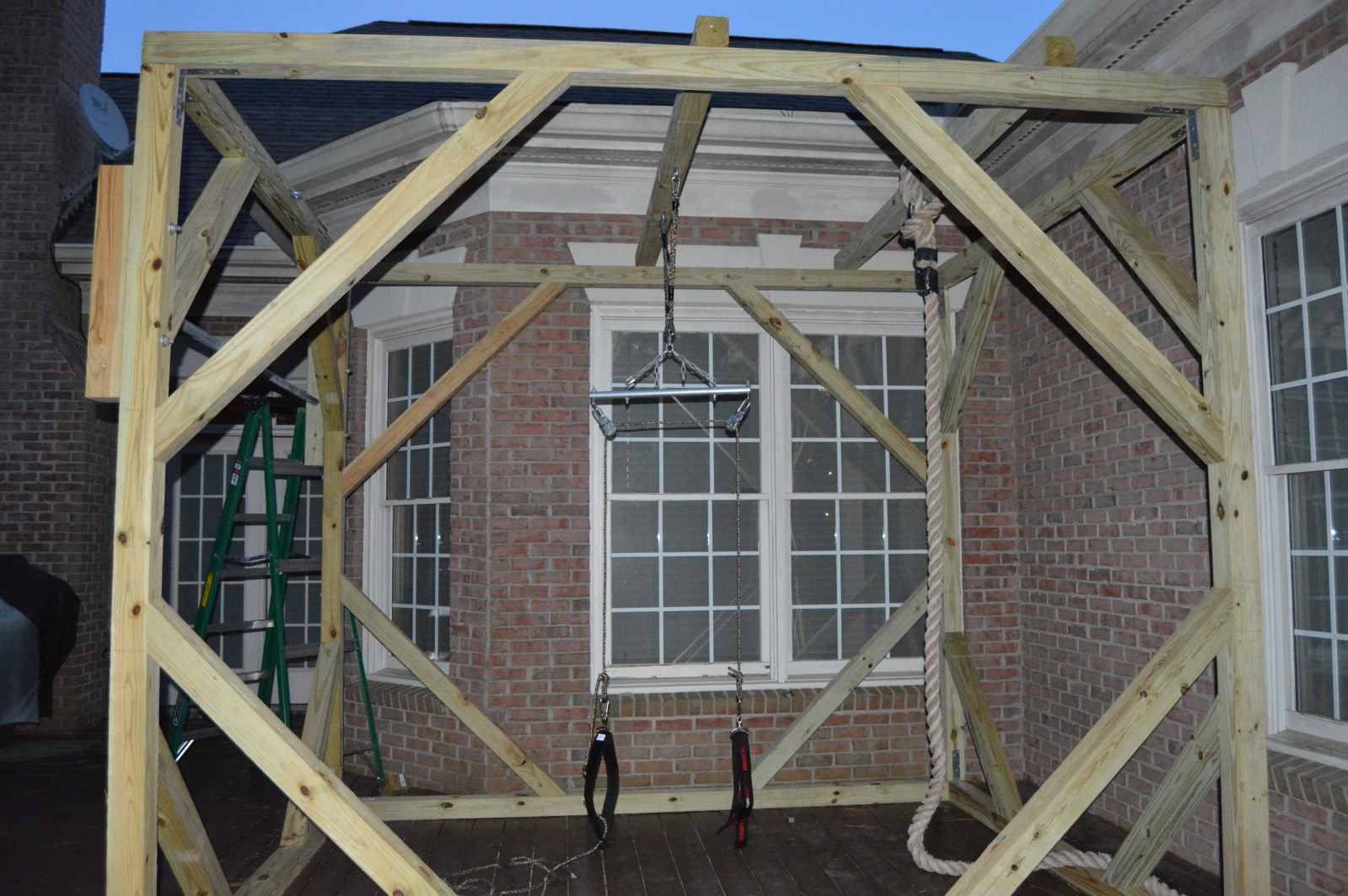 The problem is in this system my legs swing across the whole structure and the crossbeams I placed for support get in the way as they are only 4ft (and some inches) away from me on either side. I should've made the whole structure 10x10x10 so that issue wouldn't exist but I wasn't thinking obviously.

So now I am trying to hang the machine from a joist in the top.

1) It is stucco and I am unsure if something like this will eventually crack it over time due to movement. If that is the case I have no clue how to prevent such damage.

I've seen solutions such as this and this but have no clue how either were accomplished without damaging the stucco or making sure the movement wont damage it overtime.

2) The garage is directly under a room and I have no idea how I would get on the other side of the joist in order to secure it with a nut.

The only easy solution I see is an exposed beam that is still stucco covered but I could put the eye hook horizontally and place the nut after drilling it through the other side. However there is one problem with that as well. There is a garage opening mechanism close to it and I'm afraid that when I use this flare machine it will hit it pretty often if not every time. Thus why I'd prefer using a joist.

The first example to support looks like a cement anchor to me. The second would be better in my opinion because you can distribute the weight acrost several joists or trusses with the supports across 2 or more points I don't think wou will have a cracking problem with the stucco but I do think a single point may be strong enough but crack the stucco, plaster or whatever covering, so I would use that option. Several 1/4 lag bolts should support the boards to the ceiling. I like predeilling so the joist dosent crack. Large fender washers will provide additional strength since it will be a vertical pull down on the wood.

Not the answer you're looking for? Browse other questions tagged studs joists stucco or ask your own question.

3
How can I hang a heavy bag from this beam in my garage?
0
How do I safely install a weight bearing fitness equipment system in an apartment?
2
How to fix a through hole in stucco on the outside of the house?
1
Bracing 2x6 floor joists
2
Drilling into brick through stucco
0
Running multiple camera cables from outside to indoors, do I use bushing and wall plate?
0
Install outdoor power cable for Arlo Pro 2
0
How to strengthen two joists that have had big sections cut out to make space for roller garage door
0
Installing a flag on the eaves of a house no vertical wood surface