I am in the middle of renovating my home and discovered a major problem in my livingroom. The room is 20 feet by 20 feet (400 sq ft) and the ceiling is built out of 2x4s spaced 24 inch on center. Each joist is built out of 2, 10-12 foot pieces that are sistered together in the middle with only a handful (5-10) of nails. Running perpendicular to the joists, they have 2x4 blocking about every 4 feet. The entire structure has sagged a bit, which caused the plaster to crack. It is not in danger of falling down.

I would like to replace the 2x4s with larger joists, but I am concerned that the increased size joist may put more strain on the rafters. The ceiling joists would be 12 foot 2x12s that are coupled together with steel plating and nails. They would also have hangers (2x4s) attaching them to the collar ties up above which would support the center of the ceiling, similar to what you see in the picture.

I don't have any sagging or cracking of my rafters or roof line at all, even though they are also built from 2x4s spaced 24 inch on center. The span is about 12 feet which is not adequate, but being as they haven't sagged or cracked after 20-30 years, I'm not planning to do anything with that. If it's not broken don't fix it.

The question is, would replacing my 2x4 joists with 2x12 joists put too much load on my roof? 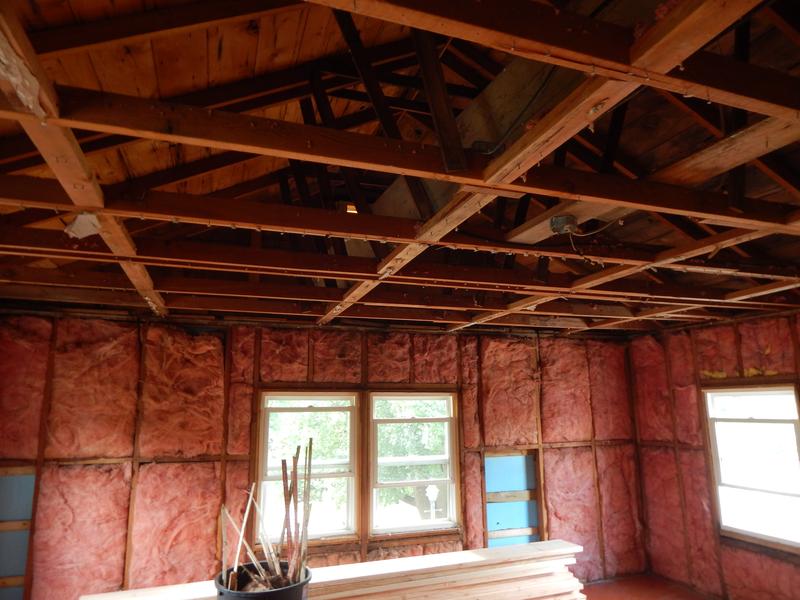 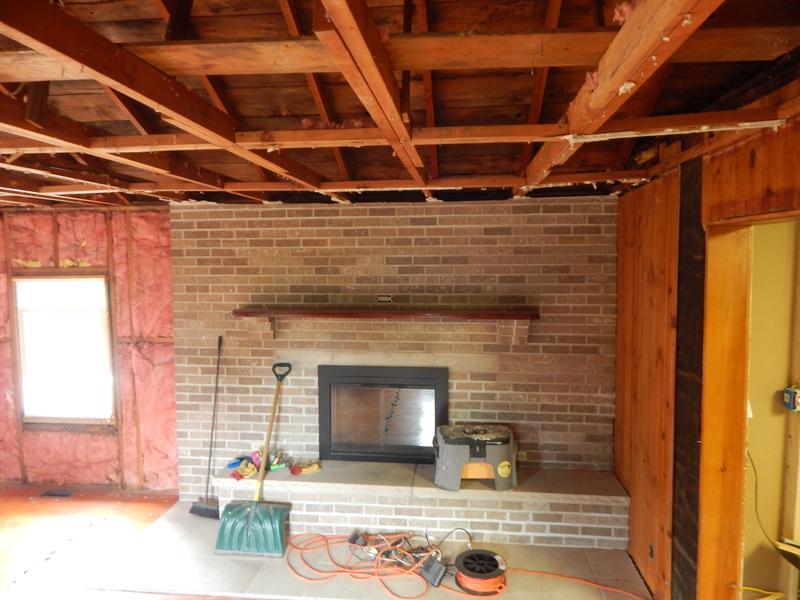 You don't have joists or rafters. You have engineered roof trusses. The bottom chords are 2x4 because that's all that's required for your scenario. They don't span the ceiling themselves. They're part of a rigid structure that's supported by both the top chords and the diagonal truss members. This is typical and has been standard practice since the 1970s with virtually no static failures on record.

Some trusses, in the case of very large spans or girders (which are sometimes doubled or tripled), are designed with 2x6 or 2x8 bottom chords. But for common trusses in modestly-sized homes 2x4 is standard.

The blocking was probably added to support a particular ceiling finish--tiles or wood panels, for example. Unless you have a particular need for more weight-bearing capacity, leave things alone. If you do, consult a licensed engineer who will examine things much more closely than we're able to from one shady photo.

This roof/ceiling is a pretty typical example of rafter construction; this is more or less how wood-framed roofs were built for thousands of years, before pre-fab trusses became popular.

The building code still contains prescriptive requirements for this technique (ie. you don't need an engineer), and will include span tables so that you can size your lumber according to code if building new. This should be available at the local library, or online in some jurisdictions. You can also find tables for dimensional lumber from various wood manufacturing associations online -- a handy calculator is here.

I'm about to digress into a rafter sizing exercise, but the tldr is that an engineer would probably not love the current structure, but it can be made to work. The sagging problem has two possible causes:

Either way, beefing up the ceiling joist won't help unless you run a single member all the way across -- that sistered joint is just too weak. The handy span calculator suggests a single 2x12 for a ceiling joist of this length. This is not out of the question -- at least where I live you can still get 2x12s in lengths of 24' and up; cost is surprisingly reasonable. I would seriously consider this option if the lumber is available to you -- 10 20' 2x12s will not break the bank, and will allow you to make a nice solid ceiling. Make sure that you install and nail fully the new joists one at a time so that your walls don't spread while you are doing this. All of the horizontal blocking can be removed, and the vertical members would not be necessary in this case either.

If this is not an option, I would stick with the current joist material, string a line from end to end in the room, and push the sag out of the joists with a board wedged in between the floor and the joint one at a time. If you add a vertical member going right to the peak of the roof at each joist, it should support the center of the ceiling so that the sag doesn't recur. This is a less proper way to fix the situation, but should work.

In the span calculator, the allowable span depends on the species and grade of the lumber used; if we assume Spruce-Pine-Fir, #2 and better, with a snow load of 40 lbs/sf, the calculator says the allowable span is only 5'11"!(per side, so about 12' between the walls in your case)

This seems like it should be a problem, right? "But how come my house hasn't collapsed at some point in the last forty years," you may ask?

Well, for starters these tables are very conservative -- I have seen heritage buildings with 2x4 rafters spanning over thirty feet between walls that have stood without bending or cracking for the past hundred Canadian winters. Engineers like a large margin of safety, especially when they are making a prescriptive requirement to be implemented by any Tom Dick or Harry in the field.

But there is something else working in your favour here -- lumber ain't what it used to be. Those 25' 2x4s in the heritage buildings are clear douglas fir, and sawn to true dimension, so they are actually 2" x 4", not 1.5x3.5. Obviously I can't tell the grade of your rafters from the photo, but they do appear to be 2"x4".

I don't know what species are used in your area, but let's plug No. 1/better Hem-Fir into the calculator -- this grade is not too crazy, as carpenters will high-grade lumber on site for things like rafters, and save the crummy boards for walls etc. This gets us up to a 14' allowable span; the rest of the difference is accounted for by the additional lumber in a rough sawn board. An anonymous engineer here feels that a factor of 1.5x is appropriate for a rough-sawn 2x4 over a planed one; also I would note that a rough 2x4 has a cross section of 8 square inches -- compare this to a dimensional 2x6. (1.5 * 5.5 = 8.25) Plugging a 2x6 into the calculator gets you a 10'2" span, which has your 20' between walls inside of (conservative) margins.

For home construction trusses, those horizontal elements are normally in tension. If you didn't have to hang a drywall ceiling, you could have steel cables performing the tension role. Normally the 2x4's are fine in that role.

Unfortunately with your spans, and that truss spacing, its not surprising that the drywall ceiling sags a bit over time. It would certainly make sense to upgrade those horizontal members, but as recommended by isherwood, you should have this reviewed by an engineer. It may be possible double the 2x4 (in the vertical direction, creating a 2x8) to preclude the sag, BUT do talk to your engineer on that topic. I suspect that is cheaper and safer than trying to replace the existing 2x4's, but dunno the details. You need to talk to an engineer.

You are definitely going to need an Engineer signed off document and design plan when you approach your local housing division with this project. Without that I doubt you can get your construction permits approved.

If you are not going to use the space in the attic, then vertical supports from the horizontal ceiling rafters up to the attic roof rafters would be the BEST which would also happen to be the cheapest too. Rarely works out that way. But if you plan to use the attic space, as I am in my old plaster house, sistering the ceiling rafters is the way to go but use bolts or screws, not nails. No hammering allowed in plaster homes :-0)

[[ Use regular wood screw, not deck screws which snap rather than bend because of hardening ]]

Only went 2 inch wide on the steel to allow the lath an plaster to be untouched.

Sistering (placing beside) the ceiling joists -either 2x or engineered wood products is likely what your engineer is going to recommend. This will add some load to the wall, less so to the roof.Snow loads have a big impact on acceptable roof rafter spans. The collar ties seem high, probably motivated by fitting large ducts in there, again the engineer can assess.

Zero middle ground there for this discussion: 2x4 or 2x12!! I can't tell if the 2x4 cieling joists are forming a load bearing surface in the space above the ceiling. My choice here would have been 2x8 if not load bearing.

Using 2"x12" spaced at 16" or even 24" would eliminate any potential sag. The 2"x12" would then help support your rafters using the vertical 2x4's rather than having your rafters support your joists. My home is built using 2"x12" ceiling joists and all the joist joints are on a load bearing wall. This home is 20 years old and has zero sag in a 20' span. The rafters (2"x6") are supported by the joists using numerous vertical 2x6's and 2x4's. Understand that I live in a hurricane area so the construction needs to be beefed up. But in the end if you "over build" how can you go wrong

2
Does this ceiling joist layout look structurally sound?
1
How can I add joists to an existing trussed ceiling?
1
Reinforce ceiling joist for ceiling storage
3
Can I remove ceiling joists without risking the integrity of my roof system?
2
How to fix sagging ceiling?
1
Do I need joist hangers for deck frame on gravel pad? What is the nail size?
2
Ceiling and roof sagging in ranch house
0
Hollow Ceiling Joist? Can joists have side panels?
4
How to repair this split ceiling joist?