Trash can 'repositories' in Luxembourg/Central Europe

We have a question on your collateral cousin's site: Travel. It was voted off-topic but still has interest. Perhaps you can entertain it here?

A traveller was on walk-about in Luxembourg and observed that there is an apparent uniformity with respect to the way rubbish bins are left outside for collection. It is in a purpose built pit roughly 55 cm/25 inches deep. The photo is uploaded here as a matter of convenience... 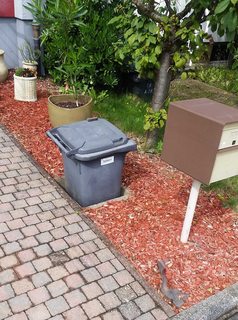 We understand that there is practical merit to this arrangement...

...but these reasons are speculation and not nailed down with the precision that would satisfy an interested person. There has been other speculation that the placement of rubbish bins is a regulated activity and a different line of thought that it may be expensive (either to install or to place the bins there for collection). Part of a building code for Luxembourg? I have suggested that there might be a cultural influence like "monkey see monkey do".

Have any of YOU contemplated having this type of rubbish bin 'repository'? What do you call it so as to help Googlers?

Question: is there something peculiar to Luxembourg to cause rubbish bins to be configured this way? Or more generally, are there other locales where one can see the same uniformity?

I'm from Luxembourg and have never seen such a hole to put the dustbins in.

We usually store them somewhere in or around the house, and put them out on the curb.

It definitely seems to be isolated to a specific house / street / neighbourhood.

The bin itself is regulated of course and contains a chip that holds the owners information.

These receptacles are build right next to the entrance-way, need little space and as they are built into the ground you can easily hide the ugly trashbin with hedges and bushes around them.

This simply seems to be an aesthetic feature to make the bin less obvious. No purpose for automated pickup or weather or anything else.

Not the answer you're looking for? Browse other questions tagged patio trash-can or ask your own question.

3
How do I keep my outdoor trash cans from blowing away in the wind?
6
How do I clean a 96-gallon automated trash can?
4
How can I fix a patio with drainage problems?
1
Can I work on resetting pavers on my patio after a heavy rain?
0
Can I use this aggregate for bedding for my patio?
5
How to trash the trash can?
1
How can I raise the level of an existing paved patio?
0
Can I apply polymeric sand only on a x inches wide stretch where the patio joins the wall?
3
How to prevent trash bins from falling by placing apart or side-by-side, on a windy day?