Correct hardware to attach to stud with this dresser anchor kit?

I bought a dresser and it came with this chain for anchoring the dresser to the wall. It did not come with the hardware that attaches to the stud.

The dresser weighs maybe 125 lbs with the drawers out. Also, it came with two of these chains for anchoring, but I just showed one in the photo. 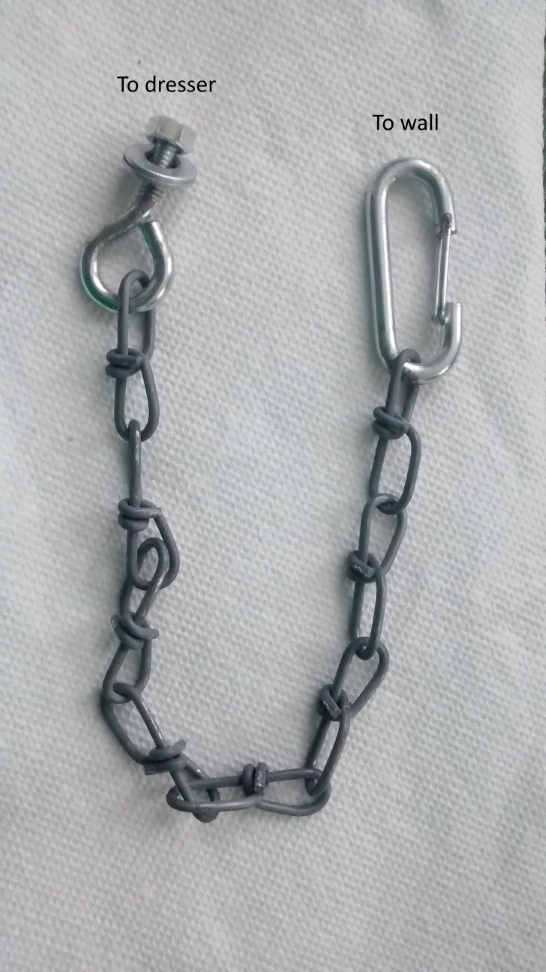 I was thinking either a D Ring or an eyehook 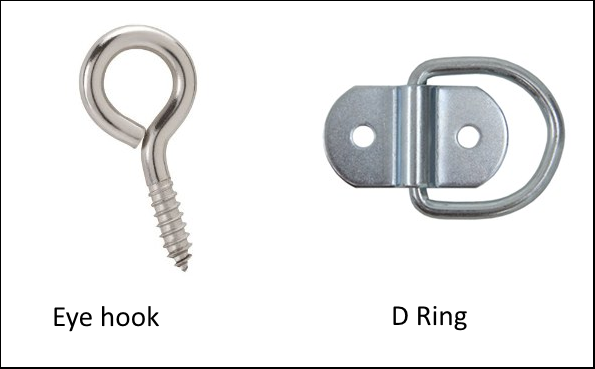 Is one type of hardware better than the other for anchoring purposes ? I like the idea of a D hook because it has two screws that would have to fail vs. the one eye hook screw. Does the screw thickness make a difference ?

Much more important than the hardware is what it is attached to.

The best protection against tipping furniture is attachment to a framing member in the wall. That generally means a stud (wood behind the finish sheet rock, plaster or paneling).

Studs can be found using a stud finder, and are generally on 16" centers, but sometimes 24". A hook-eye that goes through the finish material and 1" or more into a wooden stud is a good hedge against tipping. One centered high on the furniture piece, or better, one on each end will usually suffice.

A D-ring is okay, but the holes tend to be smaller and the screws attaching it are therefore smaller as well, with less holding power. The screw thickness does make a difference. The gripping power of a larger screw is greater than that of a small thin screw. Also the D-ring itself can be prone to failure with the wire leg pulling out from behind the mounting plate if there is a very heavy load.

If it is impossible to attach to a stud, a strong toggle is the next best attachment mechanism. I favor the pivoting bar type over the spring loaded version. These spread the load over a larger area of the finish material and the attachment bolt can be removed and reinserted easily.

I strongly urge against plastic type anchors when the load tends to pull outward rather than downward.

You may wish to reveiw this discussion of anchor types.

An exception is masonry construction, such as concrete, concrete blocks or tile blocks. These need special masonry anchors and matching screws or bolts.

Occasionally you may find steel studs, which need a finer threaded screw for attachment, and do not seem to hold as well as wooden studs.

Not the answer you're looking for? Browse other questions tagged safety anchor or ask your own question.

22
What benefit do plasterboard/drywall screws have?

4
How can I safely cut this pipe with an angle grinder?
21
Safe/professional way to transport lumber with just a roof rack
3
Correct way to attach outlet wall plate?
1
attaching floating shelves to solid wall with anchor screws
1
How can I anchor to a 1" thick hollow wall with a very shallow cavity?
1
How can I remove this concrete wall anchor?