The stair opening into my basement is framed like this: 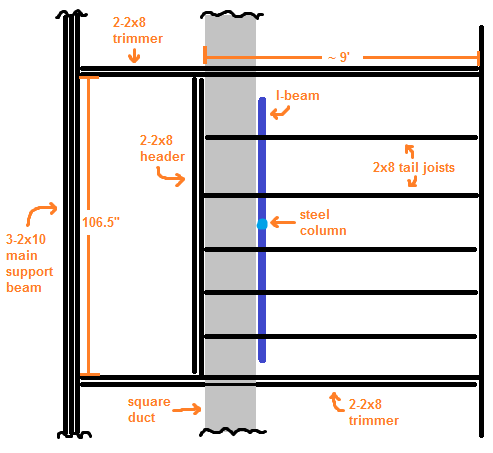 A partition wall (non-load bearing) sits on top of the header.

A square duct runs parallel to the header, and on the other side of this duct is an I-beam (3" x 3") supported in the center by a single adjustable steel column: 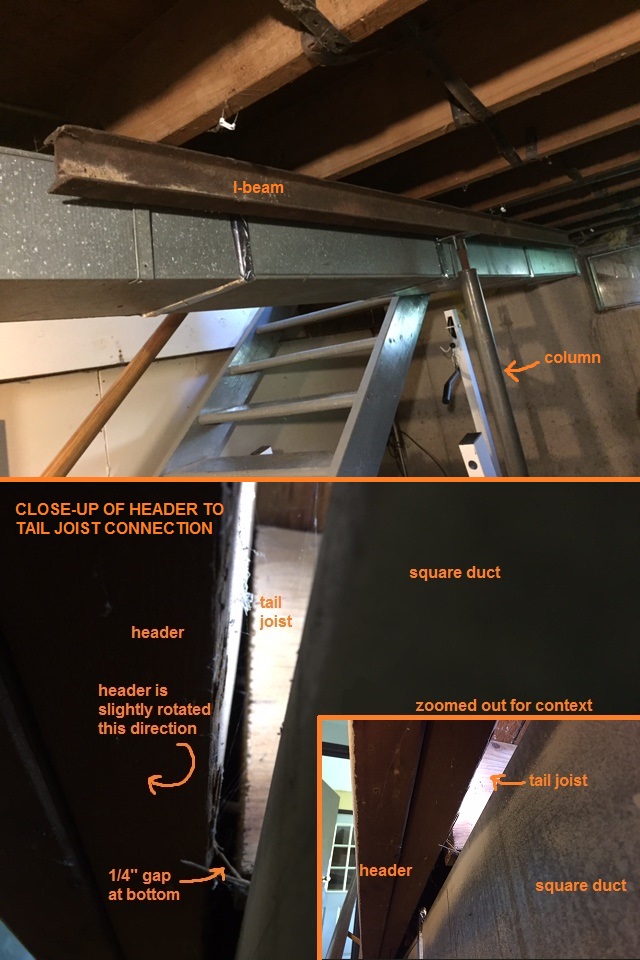 Two small bolts (maybe diameter #10 or 1/4"?) run through the column flange and I-beam to fasten them together. The column sits on top of the concrete slab floor. There are no seams anywhere in the floor -- if there is a footing beneath the column, it was put in before the floor was poured.

My house has many modifications that are clearly DIY. This whole beam and column have a very "DIY" appearance.

Between the stair opening header and tail joists (which are end nailed) there is maybe 1/4" separation (max). This may just be due to the header being rotated slightly. I believe the previous owner may have noticed the separation and installed the support as a preventative measure. Or maybe there were floor vibration issues? If it were done professionally, I would expect the support directly under the header -- not some 14" away on the other side of the duct -- and a footing poured beneath the column.

I did deflection calculations with both uniform load and joist-point-load models and got similar results -- a max header deflection of about L/600. Additionally, the stairway opening basically meets the prescriptive code in my area (Wisconsin UDC). It would be code compliant if the header and tail joists were supported by framing anchors instead of just end nailed (house was built late 60s).

So I am thinking the header/trimmers by itself should be sufficient. I would like to
1. Install framing anchors on the tail joists and header "to be safe" (and meet code)
2. Remove the I-beam and column because they are in the way.
Solution not feasible -- see edit below.

I will wind up hiring a structural engineer to confirm, but before I pay $$ to have one come out I wanted see whether I was missing something obvious. So does anyone see a reason for that I-beam and column?

EDIT: Additional deflection calculations estimate 40psf live load trimmer deflection (w/o I-beam) at 0.4" or ~L/360. I am betting this much deflection in the girders caused vibration issues.

Columns at either end of the header would lower deflection of trimmers to ~L/774. That would be a suitable solution, but would require tearing up the slab for column footings. I don't know a lot about concrete, but I am guessing doing so may be the only proper solution? I would put a load bearing wall in below the header instead were it acceptable to spread the load on the slab, but I am guessing even spread out, a load bearing wall like this would require a footing?

2x8s aren't adequate for floor joists by modern standards, let alone for beams (even doubled). Someone probably added the steel beam and post due to floor bounce or sag. My former home had something nearly identical underneath where a fireplace was added.

I'd either leave it in place or bolster the doubled 2x8s that are along the duct with additional support in other ways:

I'd bolster the two trimmers by sistering on more 2x stock. And I'd bolster the header by hanging a second header underneath the existing header, hanging it on the trimmers using diy joist hangers ... strap iron bent over the top of trimmers (notched 1/2") and bent down again along the backface/outside of the trimmers. And get rid of the ibeam and post.

Not the answer you're looking for? Browse other questions tagged stairs joists structural support column or ask your own question.