Why is this box constantly tripping?

After some heavy rain in Cornwall electricity does not work in the barns. This trip box 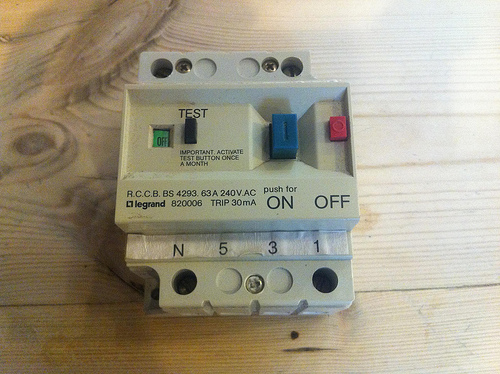 seems at fault, though it costs 100+GBP to replace it I'm told. Can anyone give me more information on what this is?

However, it is important to understand what this safety system is for, how it works, and what it does and does not protect.

There are a number of commonly-encountered electrical safety devices found in private residences; the three most common are:

Each solves a different problem, and you cannot rely on a device that solves one problem to solve the other unless the device is specifically designed to do the functions of two different kinds of protection.

Note that a ground fault protector provides no protection against electrocution from a hot-to-neutral connection through a person! In that case you are simply an electrical resistance like any other light bulb, and the ground fault protection will not detect the problem. If you somehow manage to touch both the hot and neutral wires of a ground-fault-protected circuit without 30 mA of the current going to ground, the device will not trip.

If your box is tripping frequently because of a ground fault then either (1) something is miswired; you have two hots sharing a neutral for example. (See below.) Or (2) something is draining current from hot to ground somewhere in the system; if you get between the hot leak and the ground, you're going to be the path to ground. Find it and fix it before that happens.

The fact that it happens more when things are wet is a sign that this is a ground fault. Something is draining current from hot to ground, but it is a good enough insulator to not trip the box when it is dry.

A ground fault protector does not protect against fires. There are two ways that electrical fires typically start: either the current is too high for a sustained period, and the wires heat up enough to burn the walls, or the current is too high for a split second, an arc is produced by the electrical outlet / the frayed lamp cord / the loose connection / whatever, and the arc makes sparks that light something on fire.

Similarly, arc fault protection does not protect against you being the path to ground for a low-but-deadly current, or sustained high currents; it protects against transient high currents producing arcs that could set nearby paper or carpet or mouse nests or whatever on fire.

Yes those are very expensive- but who ever told you to replace that is incorrect .. very incorrect! You see what is written on there - "TRIP 30mA" that means that when ever it senses 30mA between N and Ground(Earth) difference it means there is a leakage of electricity. It is most likely into the ground but it depends where this Earth Leakage Breaker is.

Is it in your house and the wire goes to the barn an distance away? Or is it in the barn?

If it is in the barn it means there is some dampness building up somewhere- junction box most liekly causing a micro short. This device most likely is saving your barn from burning down! Do not ignore that. To find the fault will be difficult and will mean isolating parts of the circuit to track down the offending device/junction box.

If it is in your house.. then you just need to include the possibly that there is fault in the barn like i mentioned higher AND/OR in the cable going from your home to the barn.

Either way you might have to spend some cash- but not on replacing that unit! Maybe on an electrician!

Sounds to me like the trip box is doing its job - which is to shut down power when there's a short in the lines.

Examine carefully your circuits for any water getting into the lines which are causing the real problem.

It sounds like something is getting wet, as all the wiring is protected by a single RCD, is will be very hard to find out the problem.

For some reason there is more than 30mA difference between the current in live then natural. Given that some devices “leek current” anyway, the fault could be a lot less than 30mA, or there could be more than one circuit with a fault that add up in total to more than 30mA. It may show up with testing by an electrician if you have very good lack.

Try turning of the MCB that covers any outside lights (and anything else outside), and see if the trips stop, if so you know where to start looking for the problem.

You may wish to replace your consumer unit and have a separate RCBO for each circuit; this will lead to only a single circuit being tripped and a lot easier fault finding job. (I am very glad we paid for this more expansive option when we had our consumer unit brought up to current rags. RCBOs do not cost much more than MCBs, but most electricians try to charge a lot more for them)

A cheaper option would be to fit a consumer unit with 2 RCDs, and then put a single circuit on one of the RCDs, keep moving the circuit over to that RCD until it become clear witch circuit has the fault. (It is not safe for most DIY people to move circuit in a consumer unit, as part of the consumer unit will always be live)