So I bought some new taps as the old tap corroded in the middle and snapped so it needed to go.

I took the old ones off which never leaked before and popped the new ones on.

Replacing the washers, but keeping the existing lock nut. 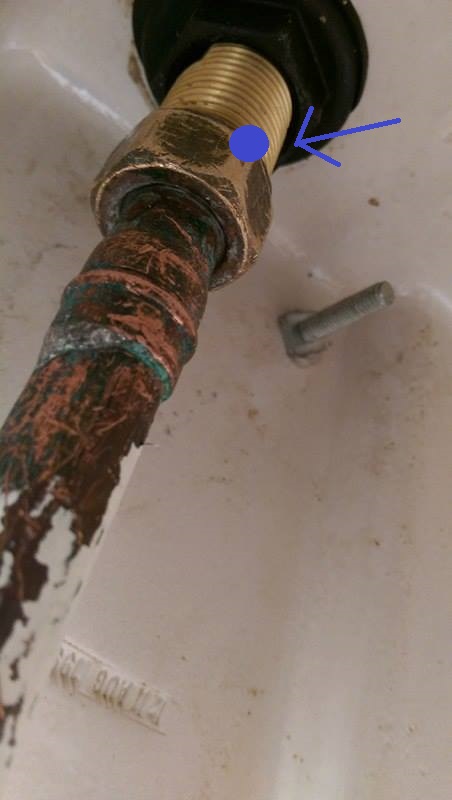 Now on the hot tap only, the nut as in the picture has started leaking. Using a basin wrench I have tightened it to it's absolute maximum and it hasn't made a different at all. What are the suggestions here? Do I need to get a new nut? If so how the hell do I get it off?

You will need to shut off the main water supply going to the house, open a faucet or hose bib that is lower than the area you will cut the pipe. Before you cut the pipe pick up on new supply tubes and this type of new valve for under the sink. Replace both while you are at it. This is presuming the pipe coming in is 1/2"

Get 2 new supply lines these are 30" you may not need ones that long.

Not the answer you're looking for? Browse other questions tagged leak or ask your own question.

1
How do I repair this leaking toilet supply nut?
6
How can I locate and repair a leak?
10
How do I seal the sink basin opening?
0
Why does my toilet feed service valve still leak?
2
Why is my Sterling three handle shower tub faucet leaking?
2
Ceiling leaking from upstairs bathroom ONLY when water supply is turned OFF
1
Repacked packing nut but sink is still leaking!
0
Copper 1/2" MIP Threads Likely Stripped, Small Leak - But Sweated Fitting
1
Trying to identify cause of minor leak from water heater TPR valve