After moving into our house (built in mid-80s), we noticed a blank wall plate right about where you would expect a wall phone jack to be in the kitchen. I opened it up and found a loop of 3 pair telephone wire. I cut into it and hooked up the green and red wires from both sides to keep the loop intact, but had no dial tone. Opening up our other phone jacks, I discovered that the jacks seem to be wired in series, with the incoming pair and outgoing pair altering between red/green and blue/white (see image below). After using the blue/white pair instead of the red/green pair, the jack worked. Is there any reason why this would have been done originally? In particular, is there a reason for me to go back and restore the pattern by switching out the appropriate wires? 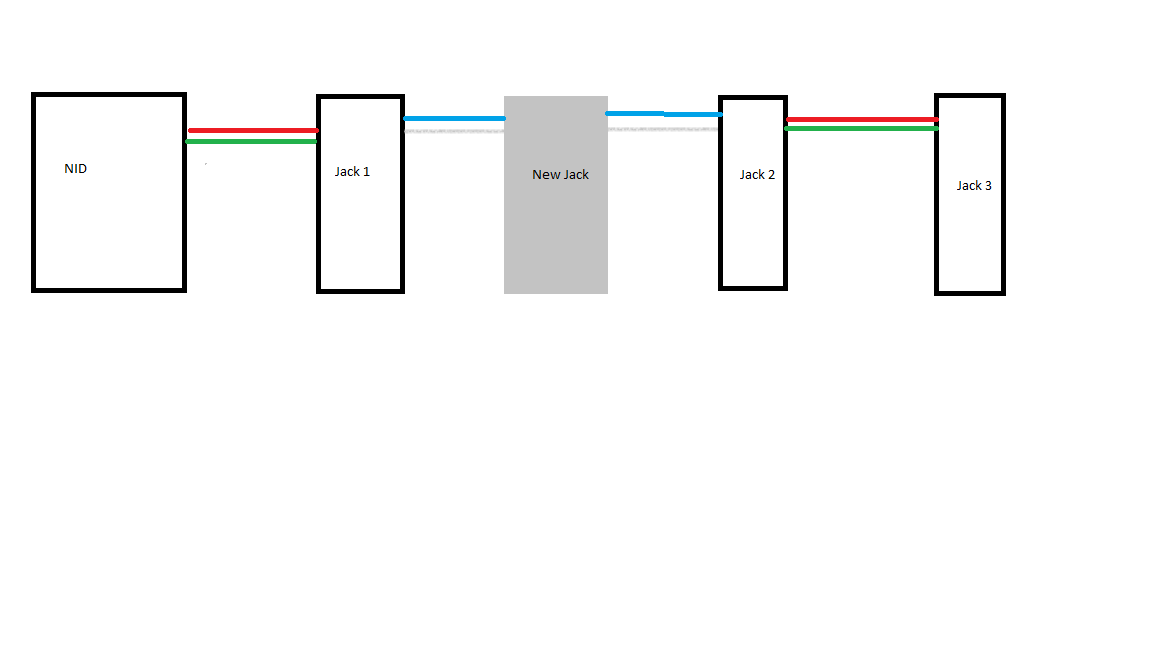 As you have found, traditional US household telephone wire contains two pairs of conductors. This was normally used to allow two telephone lines to be brought into the house, each using one pair, with both lines available at all places to ease switching back and forth or to let phones with additional switches (or, later, circuitry) switch between those two lines.

Red/green was usually the primary line, buy it was common for some wall jacks to swap the pairs so a single-blind phone would connect to the other line.

In older buildings, where the phone wiring has been changed repeatedly, the two lines may have gotten cross-connected in ... creative ... ways. Ma Bell was somewhat notorious for sloppy, least-effort solutions.

(Alternatively. rare now, you may also occasionally see the second pair just connected to a transformer. These were used to power the lights in "Princess" phones.)

5
Is it frequent to use two Ethernet cables for one phone line?
2
To which terminals do you connect a phone jack?
0
Why isn't my telephone socket working fully after installation?
1
For phone jack, which terminals are used by modem?
0
What is the easiest way to run telephone cable between floors without fishing them through the walls?
0
Moving a telephone jack and wiring it
0
Telephone wiring question
1
No dial tone on phone jacks
0
Using a telephone wall-mount jack for an Ethernet-connected (VOIP) phone
3
Can anyone suggest how to connect a CAT6 cable to the incoming 5 pair telephone cable?