I am redoing a bathroom and while I have access, I would like to do my entire house in Pex. It looks like I will be able to get to all supplies and had a few questions. My main supply is 3/4 and will run to a Viega 30 port system (2-3/4 supply and then 1/2 for all outlets).

My current plumbing is the standard 1980's copper tubing with 3/4" and 1/2" lines that are branched. I did not know that you could get away with the 1/2" as which most Pex Manifolds come. 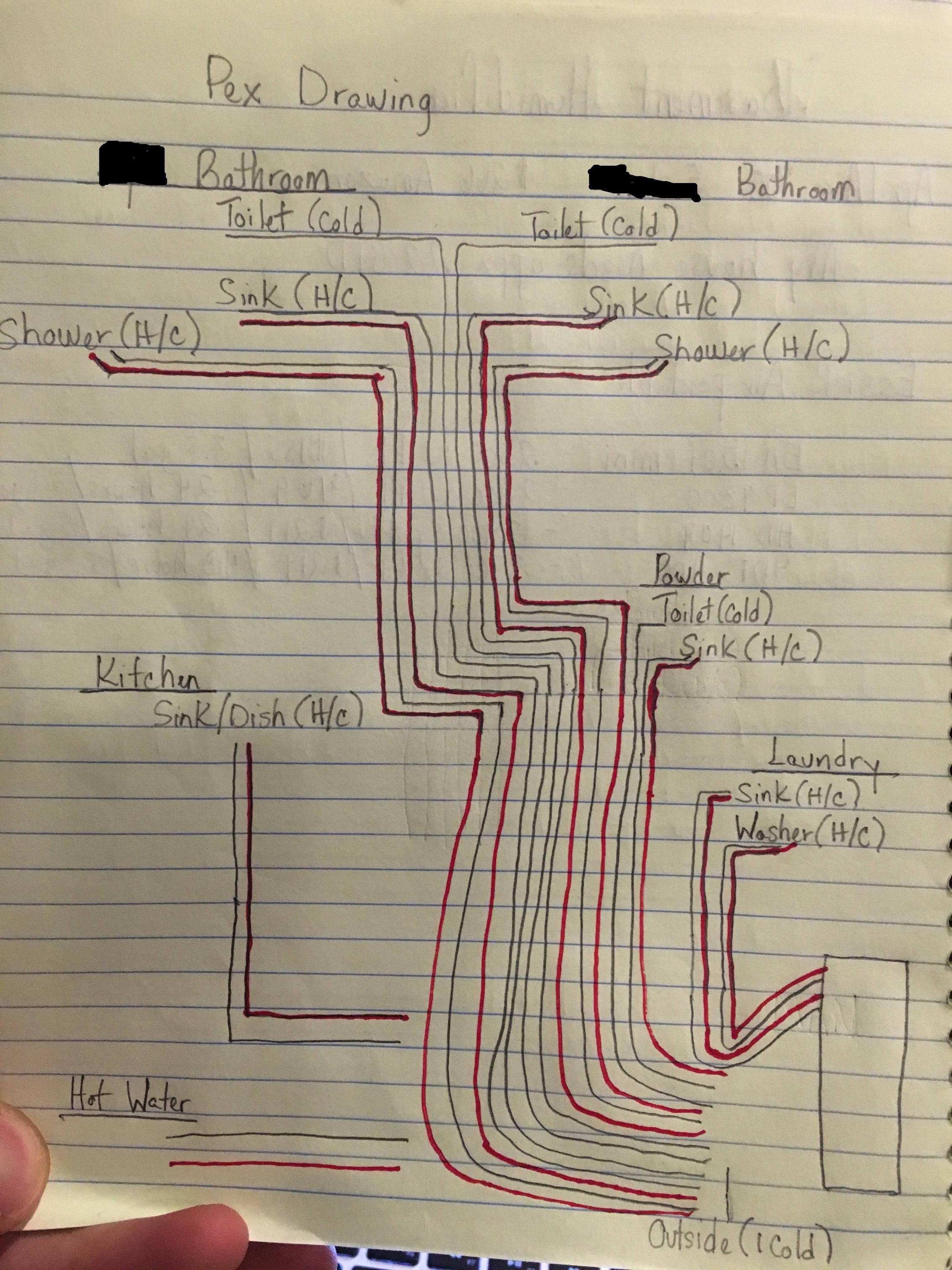 Home run pex also gives you the other advantage of pex, freeze protection. No fittings in walls, attics, or crawlspaces means no hidden damage if a freeze occurs, that's probably worth the added $100 in pex tubing.

1/2" pex will have no problem delivering enough water to any standard fixture. Test have shown that pex will perform almost identical to copper in standard household systems at 60' or more: http://www.homeinnovation.com/~/media/Files/Reports/pex_copper_pressure.pdf

You may be able to outrun your 3/4" feed though. If you have 20+ outlets you probably have laundry, showers, and hose bibbs all sharing that 3/4" feed. Turn on a garden hose and do a load of heavy laundry on warm and you'll be approaching maximum flow through that 3/4" line, which I would guess also supplies your water heater, with no pressure for your upstairs shower. That's an extreme case but you should be aware of it. I have done retrofits on 2 houses that I lived in where I ended up with that scenario, but I never experienced the problem because I rarely water the garden and shower at the same time. On my most recent remodel (with 34 total hot and cold lines) I have run a 1" trunk to 2 closets with manifolds, and put the hose bibbs and laundry on their own manifold just in case (using 1"x1"x3/4" tees to feed 6 way manifolds). That may be overkill though.

You can combine lavatory and toilet cold lines. You'll notice the water pressure change but it will only affect your hand washing. It only saves 1 line per bathroom though, so may not be worth it.

Pex should be secured every 32-48", but in retrofits you can't always do that. I have not had any tubes that bang around where I've had to run unsecured pex, but you may. Less slack in the line will give it less opportunity to move too. Long sweeping curves are fine, elbows are to be avoided for flow and freezing concerns unless you absolutely must use them. There are 90 bend supports that hold the pex in a 3" radius if you need tight turns, usually used to make the upturn into a wall. In your soffit you should be able to do sweeping turns except for maybe the upturn into the wall.

There are pros and cons to both homerun and the more traditional trunk and branch systems.

There is also the option to use a mix of both of the above systems to create a hybrid system that can take advantage of the pros of both systems. These systems use remote manifolds or multi-port tees so that there is a trunk section that serves the water to each group of fixtures with each fixture individually piped from that connection.

Here's a link to a PDF from Uponor, a pex manufacture, which provides a comparison of all three systems (they call the hybrid system 'Uponor Logic') See page 10 and 11.

According to them, the hybrid system:

I never have run a manifold system. I just run 3/4 and branch off 1/2 for each fixture. 3/4 for the Hose bib outside. Everything should be strapped down every three feet or it will clang and bang when you turn the water on and off. As for the 90s it depends how tight of a turn your going to make with the pex, if you go so sharp its going to crimp it then yes use a 90 or you can drill a holes if possible to give yourself more room.

2
How do I run new water lines from the basement to the second floor through a finished wall?
10
How should I configure my plumbing with PEX?
2
pressure loss going from 1" supply to 3/4" supply to home, 120 feet length
0
Pex Pipe Freezing & Tankless Hot Water Heater Too
0
Should I replace 3/4" and 1/2" galvanized pipe with the same sizes of pex?
1
Installing PEX pipes close to heating vents
8
Is putting a pex tube underground and then through a concrete slab OK?