remediate corroded fins on AC, if it possible - how?

The fins on my external AC seem to be heavily corroded by misplaced canine excretions: 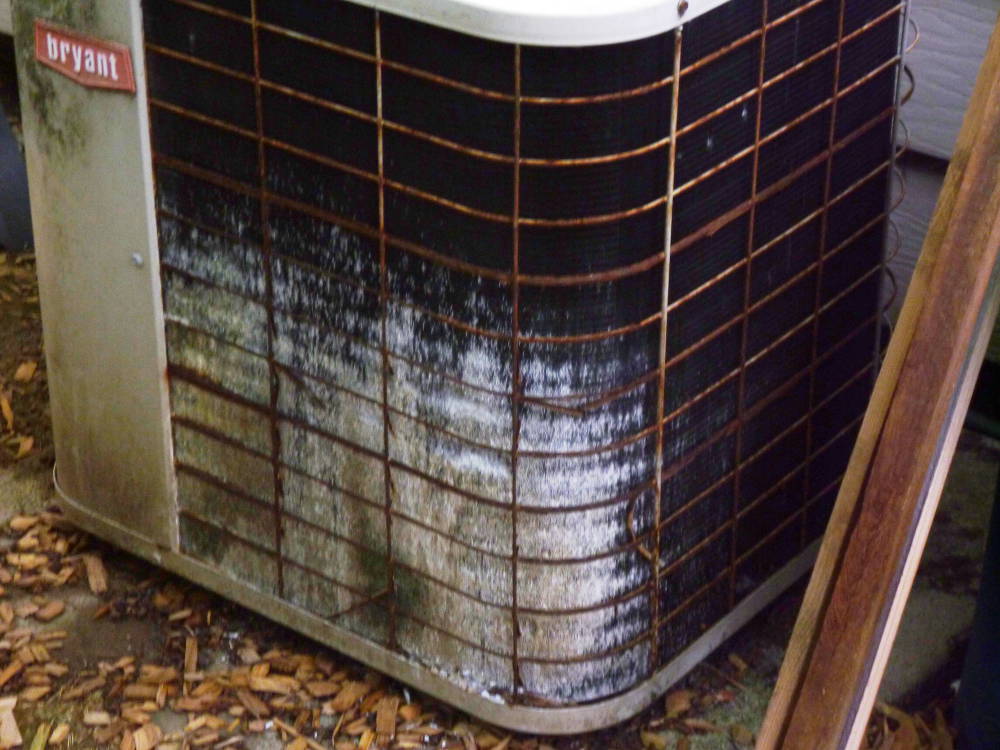 Two 50 lb male dogs, about 5 years worth of misplacment.

As is, the AC cools the house more than adequately, and we only run the AC a few days per year so we are not worried about the extra load on the system (or should we?).

Since the fins are on three sides, the dog-urine corrosion seems equivalent to not having 1/10th to 1/8th of the cooling capacity of the radiator. Some of the corrosion is 100% in the sense that it seems it would just powder away down to the R22 pipe.

Is there a way to revamp the corrosion area without opening pipes of this 10+ year unit?

Maybe clean away the corroded fins, then sister on finned 'half-pipes' on either side using an epoxy/adhesive/liquidmetal with good heat transfer properties? Or instead of adhesive, zip-tie the half-pipes in place with a thermal paste in between the half-pipe and the existing R22 pipes?

We only use the AC a few days per year, 100 hours per year at most, so short of regaining cooling capacity, it would be worth the effort if I could do something keep the corrosion from eating away at the R22 pipes themselves.

A non acid foaming coil cleaner is your best option at this point. Once the fins are gone the coils will still exchange some heat but not be very efficient. R22 is getting very expensive ( around $100 per pound) . Since the coils are damaged cleaning all 3 sides will help the system Cool possibly for a few more years. I would not try to add epoxy or other adhesives to the coil. Cleaning with a foaming cleaner and low pressure water (no pressure washers) just a garden hose may stop the corrosion and improve the condenser coil's heat exchange.

Not the answer you're looking for? Browse other questions tagged hvac cooling corrosion or ask your own question.

1
How can I straighten bent refrigerator radiator fins?
1
What could cause my water to taste metallic after a water filter cartridge was changed?
2
Five Year Mystery - Unable to find source of burning smell from HVAC system
1
Gripping a 45mm / 1.75" metal disc to allow replacement of corroded toilet lid fixtures
1
How to remove corroded faucet?
0
Toilet flush button is corroded and gets stuck
0
Is it possible to recharge a dehumidifier
1
How can a non-working corroded tub plunger with a broken linkage assembly in the open position be fixed?