Gap between door and frame is too large at latch location

As you can see in the photo the gap is the right size towards the top and bottom of the door but widens in the middle and is the widest where the lock is so the bolt barely reaches the strike plate.

The hinge side is fine and seems even. Looks like someone half assed the trim part? (Not sure the name of that piece of wood, stopper?)

Anyway what could I do so the latch seats better. Was thinking of shimming the striker but not sure what type of wood would be strongest. 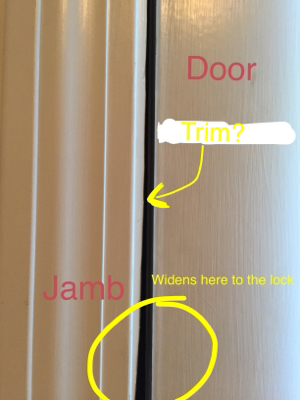 This likely has nothing to do with the casing installation, but with the set of the door frame (jamb). You're right that you should shim the strike area further out from the framing. It's also possible that atypically long screws were used for the strike plate and over-tightened, pulling the jamb in.

* UPDATE* From the photos in your other question I now realize that this is an exterior door. It's very likely the case that long security screws in the strike were tightened too much. (Though a good carpenter would've shimmed at that location when the door was installed, preventing the problem.)

Remove just the strike plate and use a small pry bar to check whether the frame will move easily. You'll need to overcome the force of the casing nails and any nails through the jamb and into the framing.

Another option is to run a construction or drywall screw into the jamb in the strike plate mortise and use it to pull the jamb. Don't get too rough or you could split the casing if there are nails right there.

If you can move the jamb, use any available means to shim it out a bit--a wad of paper, a screw through the jamb and behind the strike plate, or whatever. It doesn't need to be complicated or overly robust.

Not the answer you're looking for? Browse other questions tagged repair doors lock door-frame frame or ask your own question.

4
What are some tips for fixing gaps between door and jamb in an exterior door?
4
How do I fix interior and exterior doors that do not close properly?
1
Should I use longer screws or cardboard shims for fixing skewed doors?
1
Filling Gap Between External Door Frame and Wall - For Securing Strike Plate Screws
2
Is this door striker and lock safe?
3
Door lock stuck, will NOT retract
2
seal gap between door and frame
0
Restoring exterior door frame at latch?