We're looking a taking out a wall between the kitchen & living room that is likely load bearing. The wall between the living room & kitchen is an extension of a hallway that runs the length of the house with the peak of the roof & main floor girder running parallel down the centerline of the hallway across the entire house. There is no support directly under the wall. The only support is the main girder 12 inches away, which is supported by floor jacks on concrete pads. The it has a truss roof, and the ceiling joists meet about 12 inches to one side of the wall (again over the center line of the hallway). We've consulted with several experienced DIYers, a general contractor, and a design engineer, and no one can agree on if it's load bearing, and what approach to take to remove the wall. Since then, we've had the general contractor remove the sheet rock on one side of the wall and discovered a diagonal board across the wall (accidentally cutting the electrical in the process - but that's a different issue). It's a fairly small house - 928 square feet, and the wall in question is about 13 feet long. Any ideas on if this is load bearing, and what approach to take if it is? 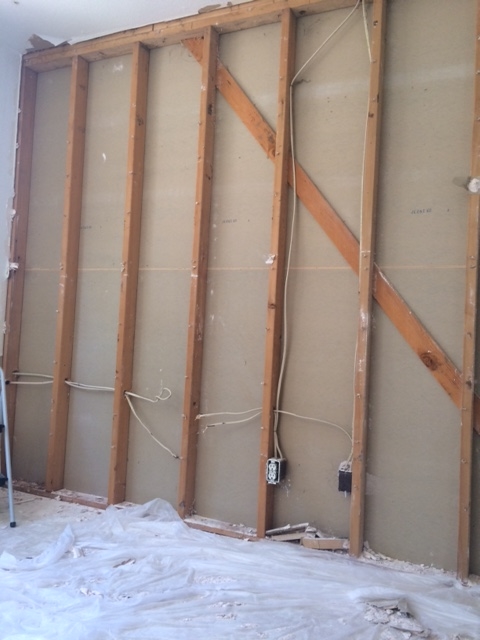 You say this house "has a truss roof". If the house truly has a truss roof, the only load bearing wall is at each end of the truss. But you contradict yourself when you say “the ceiling joists meet about 12 inches to one side of the wall”. The bottom cord of a truss (what the ceiling dry wall attaches to on truss construction) would be either one piece or spliced. They also would likely be 2x4 construction on a house that small. When you say the ceiling joists meet about 12 inches from the wall, I assume you mean that they overlap each other at that point. I would dearly hope that both ceiling joists reach all the way to the top plate of the wall in question. If not, and the fact that you say the wall is not directly supported to the building foundation, it looks like poor construction practice and not meeting whatever code is in place at your location.

I just finished removing a wall very similar to what you have described. But my wall was directly in the center of the house, parallel with the roof peak, and directly over the center beam of the house. My wife wanted a smooth ceiling, (no header), so the support had to be done in the attic. I ran the calculations for a 22’ span and found out that a span that long is totally impractical. So I put a column at 13’ from one end, which I used as a pipe chase for the kitchen sink vent. With only a 13' span, I was able to use two, 1¾” by 11¼ “ LVLs in each direction from the new column that I shimmed so they were a little more than ¾” apart. Each other end was in a wall so I was able to add 2x4s as a support and block the space between the basement beam and the subfloor so that the load was transferred down to the foundation. I also had to check that the resulting point load from these new columns did not overload the basement beam. I then fabricated some steel “hangers” from 4” channel and ¾” threaded rod to catch the two ceiling joists that overlapped the old wall. The two lapped ceiling joists nested perfectly in the 4" channel, and the threaded rod slipped between the two LVLs to above a top ¼” plate that spanned the twin LVLs allowed a firm bolted connection. The ceiling joists were shimmed as required to keep the ceiling level.

So I agree with Jimmy Fix-it on the inadequacy of a 4"x8" for a 13’ span. You don’t say where you are, north or south. If you are south, you don’t have a huge snow load to worry about. But I would spend the money and engage an engineer to evaluate the current design situation, as any changes you do could exasperate the problem.

Why are you removing walls if you can’t determine whether or not this is a load bearing wall??? Hire a professional please..... You’re looking at both a load bearing, and a sheer wall here. On approach to take, you need to put up two temporary walls to carry the load, pour concrete footerson both sides of your span. Post up, and hide an engineered beam in the ceiling. Use Tico plates and hangers with appropriate nails or screws.... (please hire a professional.....)

It's hard to judge confidently from the picture and description. If there are not floor joists or carrying timbers supporting the wall from below, and there aren't joists landing on top of it, I'm inclined to think that it's either not a load bearing wall, or it's a poorly designed/implemented load bearing wall.

If you do determine that it would be good to have something structural there, there may be opportunity to do achieve that goal and open up the space. For example, you could install a 4 x whatever's-appropriate across that span with some posts and diagonal bracing on each side.

Not the answer you're looking for? Browse other questions tagged walls load-bearing or ask your own question.