How do I install wood shutters on a brick house?

I've built some Board-N-Batten shutters and am ready to hang them on the house. However, I've never installed shutters before, so I want to be sure I install them properly.

What exactly is the accepted procedure for installing shutters? Also, what type of screws are recommended for this sort of install?

If you want to use a screw I would use Tapcon® Concrete Screws. They hold very well and are fairly easy to use. The only draw back is that they are a bright blue and you will have to countersink them and caulk or plugged the hole. 3/16 inch will be strong enough, you will want about 1.5" of penetration. To install you just drill a hole matching the size of the screw (needs to be exact size required) and screw them in. Using a screw is helpful because its about the only concrete anchor you can easily remove.

The other option is Metal Hit Anchors. These are a nail in a sleeve. you pre drill the hole and hammer the anchor in and the nail expands the sleeve.

Any time you drill into masonry you should be using a hammer drill, and a masonry bit that is specifically designed to be used with a hammer drill. 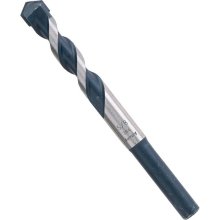 On most brick homes anchoring into the brick is going to be stronger. But it is only shutters and you could get away with drilling into the mortar. This way if you ever want to take the shutters down you can fix the hole in the mortar, unlike if you were to drill directly into the brick.

For those interested, here's the process I ended up using:

Thanks for your help folks! I hope this little walk-through helps someone else, too!

I haven't had to do this myself, so this is all theory. I'd welcome any suggestions to this. This also assumes these are non-functional shutters.

First, test fit your shutter, determine where you want the bolts to go. I'd aim for the mortar, since, as Justin says, this lets to fix any holes in the future. I don't think you'll see anywhere near the load that would require going into the brick.

Pre-drill the shutters and place them back against the wall, using the pre-drilled hole to mark where you want to install your anchors in the masonry. For that, you can stick some chalk or a pencil through the hole, hit it with a nail punch, start drilling a pilot hole, whatever works for you. With the locations marked, I would go for something like these lag shields: 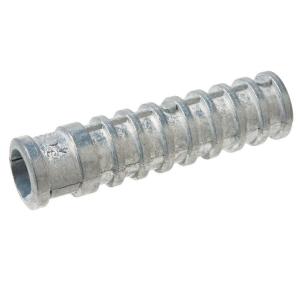 This lets you remove, paint/repair, and replace the shutters without changing the hole you made in the wall.

When installing, use some lag bolts with washers or a large head that allow you to adjust the fit if one hole isn't well aligned. Make sure to always use like metals (anchor, bolt, and washer) to avoid any chemical reactions. And when done, cover the bolt/screws with a bit of paint so they blend in.

One last thought, wood against masonry is a rot situation waiting to happen. Paint or seal all sides of the shutters, and then put something on the back of the shutters near each of the pilot holes, or run the bolts through a couple thick washers or spacer, to keep the shutters off of the wall slightly and allow air to pass behind them.

Not the answer you're looking for? Browse other questions tagged windows installation shutters or ask your own question.

0
Need to install board and batten wood shutters to my brick house. What items do I need to do this how do I do it?

4
Window Replacement (Inserts or Gut Out)
2
What masonry anchor should I use to install both window boxes and shutters into brick?
0
How can I extract broken off shutter-lok fasteners from brick?
2
How to remove broken shutter fasteners from brick?
1
how to attach wood shutters
0
Proper drilling
2
How to install wood board & batten shutters on wood siding?
0
How long should I wait to drill holes into brand new mortar?
2
Installing windows - screws laterally into studs vs nailing flange?