Wasps have made 2 holes beside the foundation of the house: 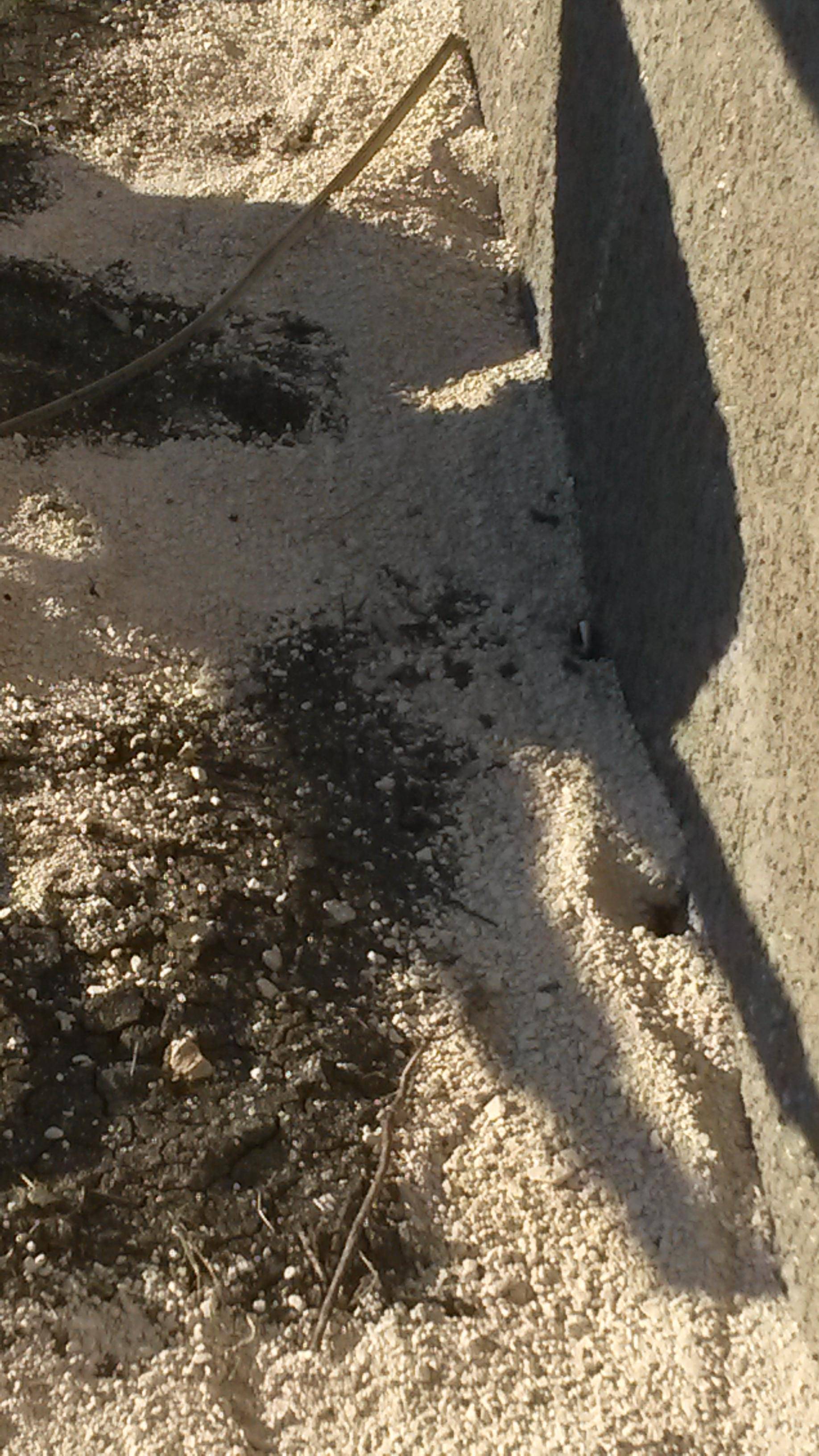 My dad wants to wait until winter, but I rather destroy both nests before they start stinging people. How should I go around destroying these?

Sevin (carbaryl) is extremely toxic to wasps, hornets, and bees; however, for safety, you want to use something with instant knock down like gasoline, or any can of wasp and hornet killer (which contains petroleum distillates). Gasoline works great (always), but has obvious environmental and fire hazards, and it doesn't leave an insecticidal residue like a can of wasp and hornet killer does (which means if you missed some of the wasps they won't be killed by returning to the gasoline treated nest... unless you use like a gallon of gas).

Starting fluid (diethyl ether), acetone, paint thinner, diesel fuel, and even isopropyl alcohol will all provide a quick knock down, but again- they don't leave an insecticidal residue. Soapy water will also knock them down pretty quickly, but not as fast as the petrols. Also, as Ed Beal said, brake cleaner will knock them down quickly. There are generally two kinds of brake cleaner: petrol (like diethyl ether) and chlorinated (like tetrachloroethylene)... both work rapidly.

It's always best to apply pesticides to wasps' nests at night, but if you must use a flashlight or lantern to see, set the light down (illuminating the nest) at least 10 ft away from yourself (because wasps will fly toward the light).

With regard to organic pesticides and essential oils, there are basically two classes of essential oils, phenols and terpenes (incidentally, gasoline is composed of phenolic and terpenic molecules, too). Thyme oil, clove oil, and cinnamon oil are examples of phenolic oils while peppermint, lemon, and lavender are examples of terpenic essential oils that add a rapid stunning effect against most insects. Generally, a combination of phenolic and terpenic oils are chosen to give (many) organic insecticides a more rapid knock down (like 0.5% to 2% is common). Of the essential oils, thyme and lavender oil have fastest effect on wasps. Peppermint and clove would also be pretty fast. Lemongrass will encourage honey bees to nest, and (generally) discourage yellow jacket nesting... this is more of a pheromonal cue. Lavender oil may attract bumble bees, and peppermint oil may attract felines (it's true). I have found that thyme oil has a more calming effect on wasps while cinnamon oil has a provoking/enraging effect on wasps.

A light weight vegetable oil or mineral oil provides the final kill for organic insecticides (like 3% to 8% is common)- via suffocation... although lighter oils like capric acid (10 carbons), caprylic acid (8 carbons), and caproic acid (6 carbons) have a more rapid effect. Oils are suspended in water with soap or a surfactant like SLS (1% to 3% is common), which again, is an all-around insecticide.

The only current examples of organic insecticides which leave a residue are naturally sourced pyrethrum, spinosad, neem oil, sesamin, bacteria, fungi, and extracts like abamectin. However, nicotine and ryanis/ryanodine (which no longer allowed by EPA) would also be considered organic insectides. I would not consider any of the current viral pesticides to be residual. Only pyrethrum (aka chrysanthemum extract) would be a suitable choice for an organic, residual wasp killer.

Wait until dusk or dark when they are less likely to be active. Get as many cans of wasp spray as needed. This depends on how long they have been at this site. It may be easier to enlist help with the spraying.

The wasp spray usually manufactured so as to spray with a long forceful stream. This allows you to stand away from the entrance and apply the greatest amount of insecticide. Saturate the entry trying to flood the opening with the spray. 2 streams will ensure any escapees are dosed with the lethal spray and unable to sting anyone.

Some suggestions: make sure you are not allergic to wasp venom which can cause severe shock and/or death. Some wasps may allude your attack. Be ready for a sting or two. Dirt mixed with water and applied to the welt as a poultice will sooth the burning sensation. If you can't get a apiary hood or garment wear long sleeves and goggles that seal against your skin. Don't wear glasses that a wasp can get behind and prevent you from swatting it away.

I've successfully evicted yellow jackets by coming back at night(when they're dormant) and tossing a tablespoon of moth flakes down the hole. By the end of the next day, they were gone without a trace.

If you don't want to get too close to the hole (I didn't), bring a length of 1/2" pipe with you, put one end at the hole, and drop the moth flakes down the pipe.

If you want to kill them, a shot of wasp spray will certainly do the trick. They make organic ones that are made of citrus oil and clove oil. (You'd think that was some crunchy granola nonsense, but I've used it and it worked just as well as the poisonous stuff made by Dow or whoever.)

I had yellow jackets a couple of times in my shed and a wasp nest under my deck once. I used the wasp spray from the store. If you can't find it there it might be out of stock because there are times when the wasps are invading heavily and everybody is buying it. Try another store. I wouldn't try hot water because you can't keep your distance and that is essential! Yes, do it at night and the light source further away in a different direction as you will be. You will be surprised how many are gonna come out of that hole, that you didn't get with the first spray. And keep as much distance to them as you possibly can. Good luck! And remember safety first!

I had a similar problem under my deck. Used raid wasp off one bottle and it destroyed the large nest.

I sprayed first the entrance to prevent the attack and then used the pipe included spraying inside the next. Next morning very few wasps were flying around and eventually left as the nest was destroyed. Then used soil to cover the hole.

4
Kind of contractor to hire to install new basement window, where there was none before?
6
How do I quickly address my foundation issues?
1
Faulty grade and pest infestation
0
How urgent is it to fix cracks in foundation?
0
New construction home, loose foundation anchor nuts
0
Help needed identifying major structural issues
0
Layered with crushed stone for concrete slab, but heavy rain came
1
How to fix out of level foundation walls