Are these 3 switches wired correctly?

I added a dimmer to the ceiling fan light, a three-speed fan control for the fan and a regular switch for the outlets. I simply followed the wiring as it was originally installed in the box - replaced each switch one at a time while being sure not to mix up the wires.

Everything works but I want to double-check that the wiring is correct since this is more complex than anything I've done before. 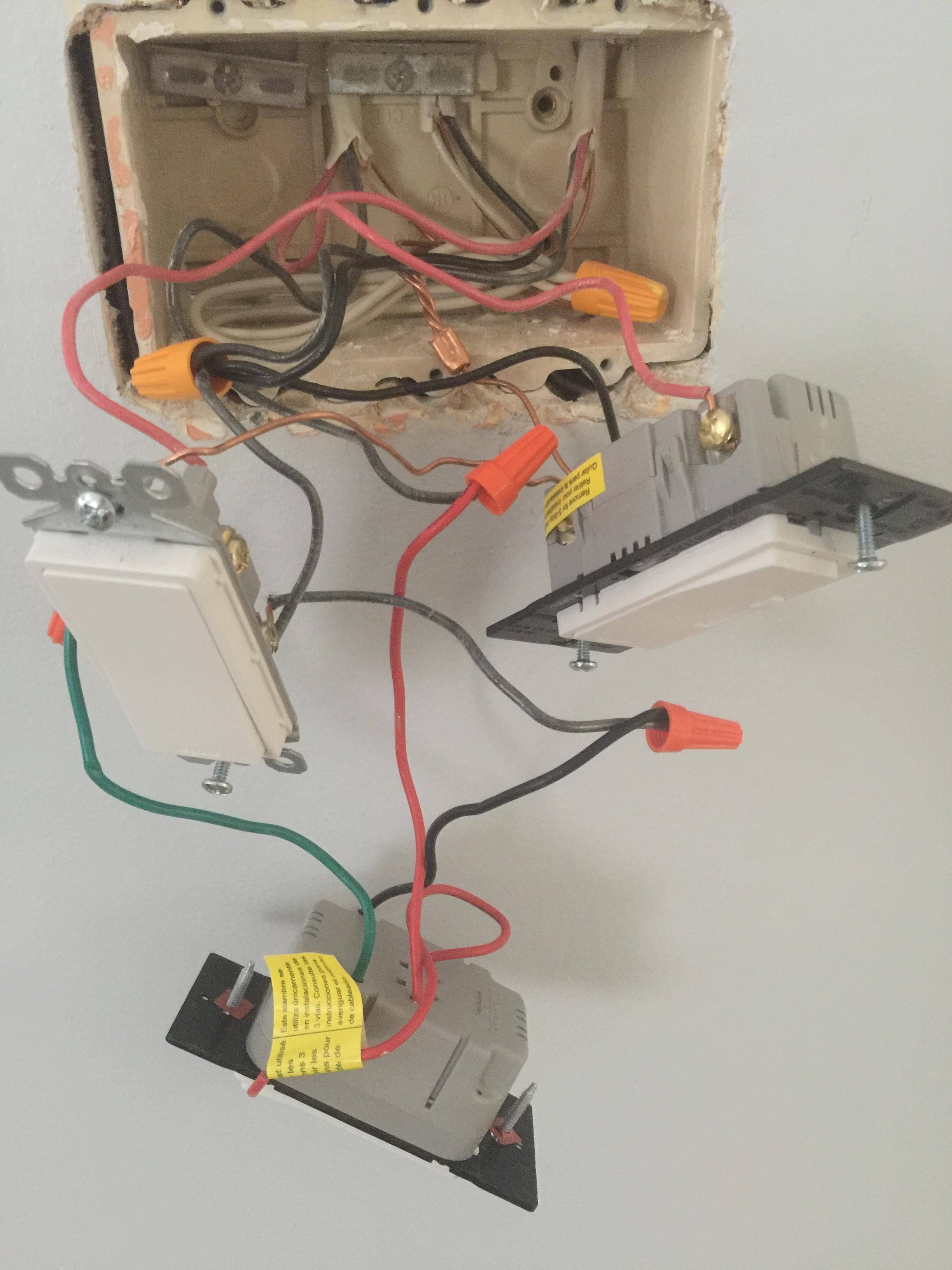 The box has three wires coming into it. Two of the wires have white, black, ground and red wires. The third wire is just black, white and ground.

As I said, everything works exactly as it should. The only odd symptom I'm seeing is that the small LED light on the fan speed switch is noticeably dimmer than the LED on the ceiling fan dimmer. They're the same brand so I assume they should be the same brightness. The fan speed switch's LED also flickers off and then on when you adjust the speed.

In terms of electrical connectivity, yes, the switches appear to be wired correctly. BTW: the big nut o' white wires in the back means that power's actually fed to the switch box first instead of being fed to the light first with a switch loop to the switch. This is a good thing because it makes installing fancy timers/smart-switches/etal much easier than in a switch loop configuration.

However, there are a couple of minor workmanship issues that I'd like to point out before the inspector does. First off -- there is no reason to double-tap the pigtail for the left and center switches -- the center switch provides its own pigtail which can be nutted in to the nut o' black wires with a wirenut of sufficient capacity. Second, your box has lost the clamp plate for the cable on the right -- it may be possible to hack it by transplanting the unused clamp plate from the left top to the right top, though. (Of course, you can always clamp the NM as if it were a standard metal box provided box fill allows for that...)

The switches appear to be wired correctly. The switch on the right appears to be an LED-compatible, triac dimmer. But you have one triac-dimmer switch for LED lights (on the right), and another switch that controls the fan plus another LED bulb? This bulb is the problem... or this fixture cannot be used with that particular model of LED bulb.

Generally, LED dimmers are not the same as fan dimmers. You can't dim many models of LED lights with a fan dimmer unless you had LED bulb(s) that are specifically compatible with traditional or fan dimmers (now technically, fan dimmers are actually a little different than traditional dimmers, but for your issue that shouldn't really matter).

I think you need to find an LED bulb that says it is compatable with traditional dimmers for the one socket being operated by the fan switch.

Not the answer you're looking for? Browse other questions tagged electrical switch ceiling-fan dimmer-switch or ask your own question.