All the ceiling lights are 15 watt recessed lights.

I have them all wired up the same as this diagram except move the second switch to a separate box and add two more circuits, plus more lights on each circuit. It's pretty basic wiring. Each switch has three wires going to each box, the first going to the lights, the second coming from the power source, with the third wire continuing to the next circuit. The neutral wires are all connected in each and the grounds are all connected. 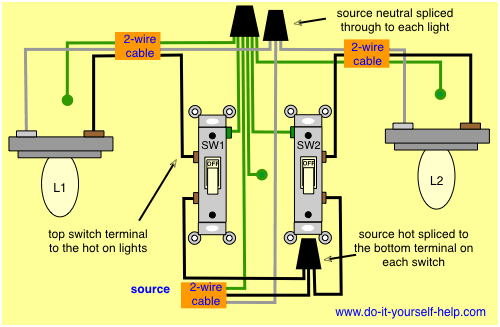 I noticed two nights ago when my wife went to the bathroom when she turned on the bathroom light, all 4 ceiling lights in the bedroom showed a TINY amount of light and then subsequently dimmed! LED lights take a few seconds to turn off, slowly dimming in the process. It was quite noticeable, but you can only see it in the dark. It's not enough to get around in the dark though.

Is this normal? Do I have a problem with my wiring setup?? Do LEDs behave this way?

Edit - this morning I tested with a voltage sensor, and it does indeed beep for a split second when hold it up to the bedroom light wire while turning on the bathroom light. The same for every other circuit. This indicates a small bit of power goes through the wire. Is it traveling back through the entire neutral wire, even on the other circuits?

No, but it is not especially unusual.

Do I have a problem with my wiring setup?

Do LEDs behave this way?

It is a common problem with some types of LED "bulb" in certain situations.

Some older accessories that need to draw a small amount of power at, for example, a switch location that has no neutral (only live and switched live) do so by drawing a tiny current through the light bulbs controlled by the switch, the current is too small to make an incandescent light bulb glow but is enough to make most kinds of LED bulb glow.

The working part of Incandescent bulbs, (the coiled tungsten filament) operate at 120 V AC or 230V AC and draw around 500 mA current when working.

Each of several working parts of a LED bulb (each individual light emitting diode itself) operates at about 2V DC and draws maybe 8 mA from the 120 V side of it's driver circuit.

So it can only take a very small current to make a LED begin to light up.

Since LEDs are low-voltage constant-current DC devices, there has to be some driver circuitry somewhere to make them work with 120V AC. This circuitry is either built into the "bulb" or is a separate box. There are many different designs for the driver circuitry and some of these are more susceptible to producing the sort of effects you report.

I don't know if induced voltages from long runs of wiring next to each other are enough to start to drive a LED, but there are probably many circumstances where this happens unexpectedly - it isn't a certain indication of a wiring fault. Far from it.

I tested with a voltage sensor, and it does indeed beep for a split second when hold it up to the bedroom light wire while turning on the bathroom light.

This does suggest some sort of inductive transient voltage being generated. Are there any fluorescent lights in the bathroom?

To properly diagnose this issue you will probably need more equipment - or hire an electrician.

Not the answer you're looking for? Browse other questions tagged electrical switch led or ask your own question.

4
Will this light fixture wiring pass inspection?
1
2-wire switch loop controlling 2 outlets - replacing with 3-wire to fix?
4
What could cause lights to come on full strength then dim?
0
Can I change a switch within a circuit from powering multiple lights to a single light?
1
How do I wire a GFCI/Switch with power entering at the light and only protect the receptacle?
0
Light switch won't turn on unless switch in adjacent room turned on
0
Light with 3 way switch does not work. Need help!
2
Existing 3 way switch light - add a light