Why does the overflow pipe on a water heater open to the floor?

See here, in a standard home water heater, how there's an overflow pipe which would just dump the extra water on the floor if activated.

Why is this? Why does it not go the same way as the drain on a sink or bathtub, or a toilet? (I am not sure what those output pipes for drains are actually called....waste pipes? drain pipes?)

Why would you ever want it to pour out onto the floor? 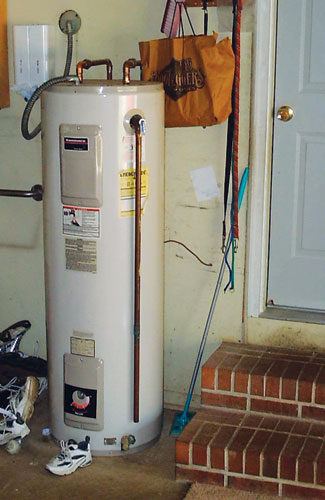 A- This is not an "overflow" pipe.

B- It is not connected to an "overflow" valve.

C- It is a drain pipe connected to a Temperature & Pressure Relief Valve which is not only a legal requirement, but a critical safety device to prevent an over-pressure event (boiler explosion- google it)

For years and years, it was common to see no pipe at all. The pipe is a great idea whether or not it is plumbed to a drain or alternative location because if the valve activates it is less of a hazard to humans when scalding steam and water are directed downward and away from hapless victims. Some (if not all) localities require that they be plumbed to the exterior of the building or to a floor drain if the appliance is located in the home. Appliances outside of the home (as yours appears to be) may not be subject to the same requirement. Check with your local building code authority office.

P.S.- there should not be water coming from that drain pipe. If there is you may have a defective TP Valve (or worse, a malfunctioning boiler). Call a plumber.

That "overflow" pipe is supposed to go into a drained overflow pan, or barring that, to a drained floor. This goes to the same place as all the other drains, but can't be plumbed "hard" due to the need to provide an air gap. This air gap keeps your drains from backing up and proceeding to contaminate your water supply with nasty stuff.

P.S. It's really not an "overflow" -- but the outlet from a Temperature and Pressure relief valve that keeps your water heater from rocketing its way through your roof and into your neighbor's yard should the control valve or thermostat fail. If water is coming out of it, call a plumber, as that indicates one of three possibilities:

It drains to a place that is adequate for a very very rare discharge of water. It's about cost. A garage floor has a perfectly good drain, the door. Installing an additional drain under the floor would be a waste of money. If this were in a finished space the whole boiler would (or should) be in a pan that drains to somewhere appropriate.

The reason that the pipe from the pressure and temperature relief valve does not "go to a drain like any other pipe" is that you are Supposed to notice and take action if it is operating There is a problem that needs to be resolved if it is operating.

It is specifically forbidden in the plumbing code (IPC 504.6) to run it directly to a drainage system. If the floor will not be damaged by water (looks like a concrete slab garage floor) then no further "drain" is required. If the floor will be damaged by water then it should drain into an open catchment (which can run to a drain) which cannot fill up and allow waste water to siphon back into the potable water system, and which is visually obvious to the building occupants.

To provide a bit of an international perspective... 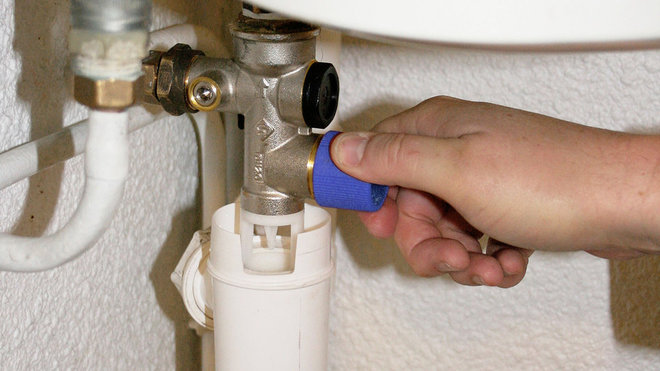 That's an overpressure valve on a French water heater, it's in a different place but it's basically the same stuff.

When the water is heated, pressure increases, so the valve releases a little bit of water which drips down along the tip in the center, into the white plastic drain (this is also a u-bend so it doesn't smell).

The important thing is the large hole between the drain and the overpressure valve. The part with the hole is integrated with the valve and cannot be removed, because its purpose is to make sure no-one will screw a small pipe there, or anything else that couldn't handle the full flow in case a failure happens and the valve has to vent quickly.

So in normal use, a little bit of water drips into the drain when it heats. If the thermostat welds itself close and the heater heats non-stop until the water boils, then the valve opens and has to vent all the water quickly. If the drain can take the flow, it will go into the drain, but if not, it's better to have a spill than an exploding water heater.

So... don't plug this valve... and if you put a drain under it, make sure to leave some space. Never connect it directly to the drain with watertight fittings, otherwise if it vents, it will send pressurized water into the drain, which is not rated for pressure so pipes will break, and you'll still have a spill, but it'll be brown water...

0
Water Heater PRV keeps opening
2
How can I figure out where the toilet overflow pipe goes?
1
How to plumb a point of use water heater overflow
1
Kitchen sink overflow pipe too long?
0
How should I terminate water heater drain pan?
0
Does sealing an apartment floor trap cause clogs in the main drain line?
0
Is there a way to connect this 1.5 inch tail pipe to an older nonstandard water pipe?