Should I cover area where ceiling once was?

I'm in the process of converting a 10'x11' bedroom into a master bathroom. I plan on removing the ceiling soon and it will be replaced when the drywallers come in a month or two.

My question is, should I use some sort of a tarp or something to cover the area that the ceiling was? If so, what should I use? How should I fasten it?

Also, should I just allow the insulation to come down with the ceiling when I take it down?

The room that we'll be removing the ceiling from. As you can see, all of the drywall has been removed as well as the carpet and pad so I'm not worried about the mess from the insulation. 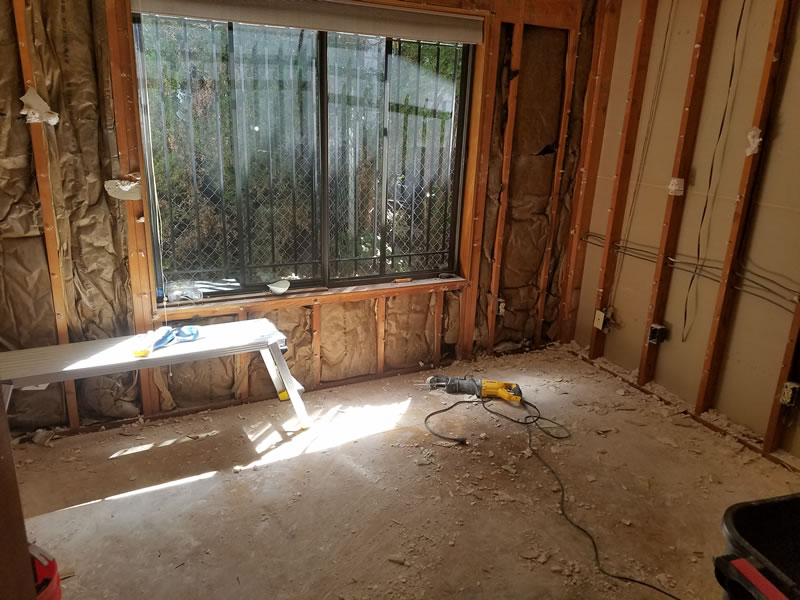 What the ceiling texture looks like. We hate this texture and we're going to have it scraped by the drywallers but we were told that it would probably be just as cheap for them to put up a new ceiling and texture it plus this would give us good access for running new wiring, plumbing etc... (notice that it's not popcorn texture, but something else)

Attic space above the room. Previous owner did some shoddy wiring. Hopefully there's no asbestos in the insulation! Also, notice the old-school TV antenna? 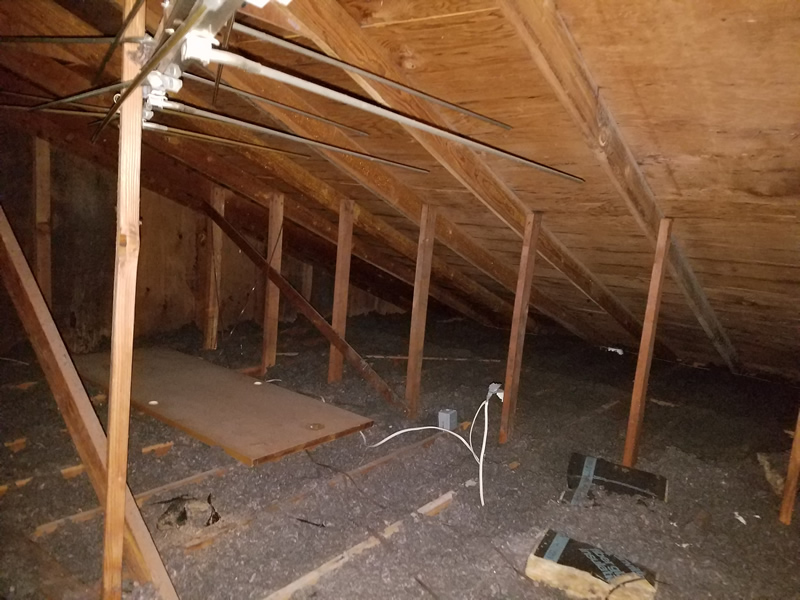 There is no reason to be demoing this more than a day before it needs to be done. Demoing the ceiling is a 1 hour job. If they plan on running new electric and you will be demoing it is normal to cut out parts of the ceiling to make your runs - even big parts. We would simply screw the drywall back in where we cut it out with 4-5 screws - doesn't need to be perfect.

Also you should cut out a 2'x2' hole, dump drywall and insulation in large trash bag. Then get in attic and throw all of the insulation in the area in that hole - with a helper this is 20 mins. This will give electrician room and view to do what they need to do. Or you could just move insulation to other parts of attic. But get it out of the way either way before starting to cut drywall as cleaning that up out of everywhere is a waste of time - and if your house is finished it gets everywhere.

So you can in effect have the bathroom cut into 4-5 small sections - effectively demoing it while leaving just the drywall up - just pop out the drywall over the screws using something flat and strong. Yes it will have holes in it and not be optimal but you can still get it back up there. You don't need to buy some special tarp for this. Or you can just take it down an hour before they get there.

Not the answer you're looking for? Browse other questions tagged bathroom insulation ceiling attic or ask your own question.

6
What size of ceiling joists should I use
4
How to install ceiling light where there previously was none?
1
Can I tile directly over Artex?
5
Supporting a fan in second (fake) ceiling
1
Does the inter-floor insulation in my 1911 home contain asbestos?
0
Rules for wiring and conduits on basement ceiling with or without drop ceiling?
1
Should loft insulation cover wall cavities?
0
What to consider before removing a drop ceiling?
0
How to cover area under vanity with PEX exposed?