Ask Question
Asked 6 years ago
Modified 6 years ago
Viewed 4k times
0
This question already has answers here:
Is it OK to borrow a ground wire from a different circuit? (5 answers)
Closed 6 years ago.

Can a single ground wire ground 2 outlets? I don't want to run another wire through the wall, if I can run a wire to that other ground wire (and have 2 outlets being grounded by one wire). In other words, 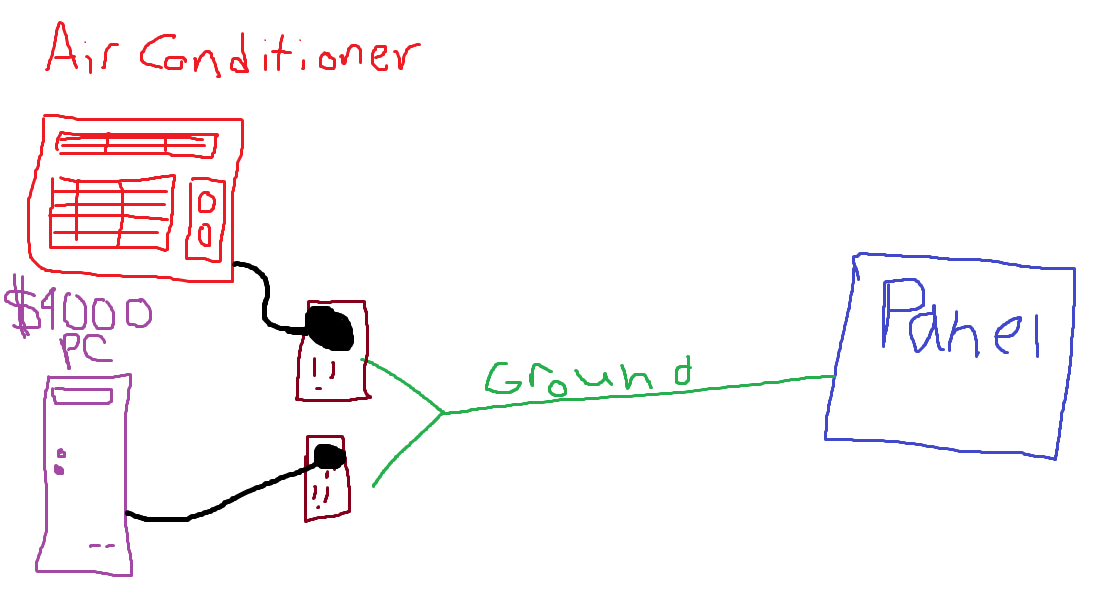 I also have concerns about equipment protection. Will adding a ground wire be worse for my electronic equipment in any way? If I am having problems with equipment taking damage, will this help?

With the 2014 NEC addendum, your idea looks to be legal. Here's the relevant 2011 code for ground retrofits with 2014 addendum courtesy ThreePhaseEel.

(C) Nongrounding Receptacle Replacement or Branch Circuit Extensions. The equipment grounding conductor of a grounding-type receptacle or a branch-circuit extension shall be permitted to be connected to any of the following:

(1) Any accessible point on the grounding electrode system as described in 250.50

(2) Any accessible point on the grounding electrode conductor

(4) For grounded systems, the grounded service conductor within the service equipment enclosure

(5) For ungrounded systems, the grounding terminal bar within the service equipment enclosure

Thank you ThreePhaseEel. The 2014 addendum specifically allows grabbing a ground from any circuit fed by the same sub-panel. Interestingly, nothing about conductor size, but keep in mind the context is ground retrofits only.

If you are going to another outlet on the same circuit (i.e. also turns off when you flip off the breaker) it's already allowed - daisy-chaining like that is the normal way to wire outlet strings.

Where to attach this ground wire? If you're wiring it to an adjacent outlet, just use wire-nut (commonly a yellow one) to tie it in with the ground wires already there.

If you're going into a service panel, tie it into the bus-bar which has all the other ground wires. Here's a picture of a panel with two bus-bars. Sometimes there is one bus bar. Sometimes they carefully separate grounds from neutrals. Other times they don't, depending on the rules. Just Do what you see in your panel. 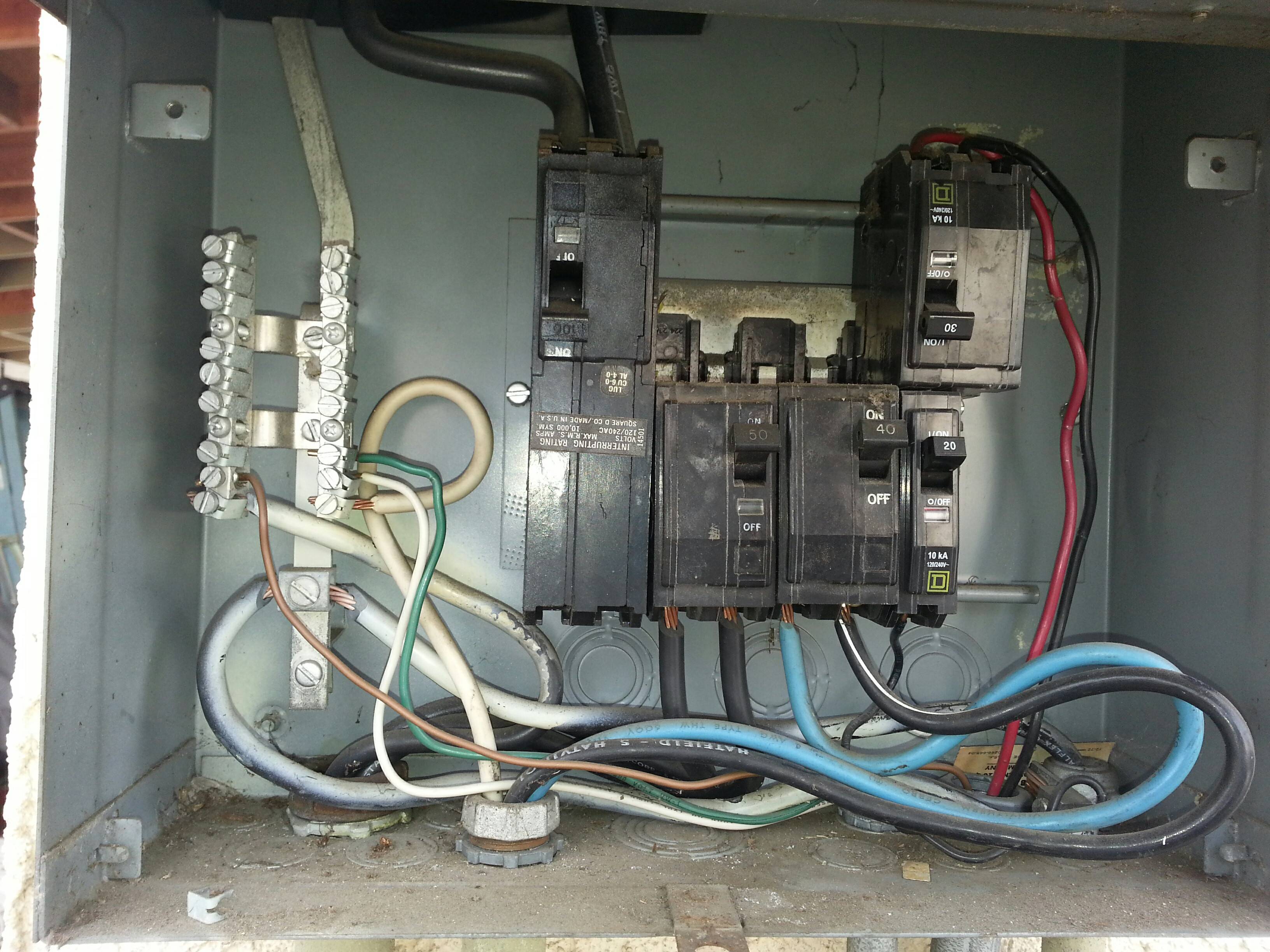 Those are all single breakers, you might have a tandem aka duplex, which crams 2 breakers into one space.

Generally, adding a ground wire is always better for electronic equipment. It helps surge suppressors do their job by providing a ground reference. It provides real chassis grounding which among other things gives a solid route for static electricity to go to ground instead of getting inside equipment. It also provides a fault path if any hot wires short to ground, which assures you get a breaker trip. And it makes sure equipment chassis is not energized so it electrocutes someone. I'm glad you're doing it - it will help.

That said, grounds will not cause cheap electronics with poor components to suddenly become quality. Grounds will not themselves "clean up" dirty, noisy AC power, although they will help surge suppressors do that. Dirty power is often caused by your own equipment - for instance the air conditioner in your drawing. You may want to protect the PC from the air conditioner.

Grounds also don't fix potential overloads, and you might have one here. Fancy PC's aren't necessarily power hogs (the Mac Pro is only 2.5 amps) but "850 watt" PC power supplies are popular and they can draw 10 amps full bore (the difference being inefficiency). A typical window air conditioner is 5-8 amps. Loads which are continuous should only run at 80% of circuit capacity, that's 12A on a 15A breaker and 16A on a 20A breaker. I would encourage you to investigate further to make sure those loads (and the other loads on that circuit) aren't too much. To measure a device's actual current draw, gadgets like the Kill-A-Watt do nicely.

This doesn't look like the same question that I originally answered. 1 ground wire to the panel is totally legal. Usually the breaker size sets the maximum number of outlets a 15 amp breaker with 14 AWG wire 10 outlets are acceptable. Having a ground may help the RFI filters on the computer. The ground wire can only help. Putting a heavy motor load like the AC on the same circuit as the computer is not a wise idea without installing a UPS to power the computer to protect from the large power swings when the AC turns on and the inductive spikes when it shuts off.

28
Is it OK to borrow a ground wire from a different circuit?
0
Can i use 1 ground wire to ground 2 outlets?
3
If i use one ground wire for two outlets, will my equipment get damaged?

6
Can I run a ground wire of a single circuit to the panel outside the house?
0
Electric ground from another circuit
6
What problems could occur if I plugged a 3-prong plug into a receptacle labeled "No Equipment Ground"?
1
Is it acceptable to use a ground wire from one outlet to ground another?
5
Ungrounded outlets, what are my options?
1
Why must all outlets share a ground conduit?
4
What are the relationships between ground and arc protection in breakers and in outlets?
0
Switching to three-prong outlets where ground wire is present
0
Can I use a single wire and run two jumpers to two gcfi outlets and on the other side run two wires off the single wire to two gcfi circuit breakers?