We came home last night to find one of our powerboards (outlet strips) had melted/caught fire. Pretty scary! 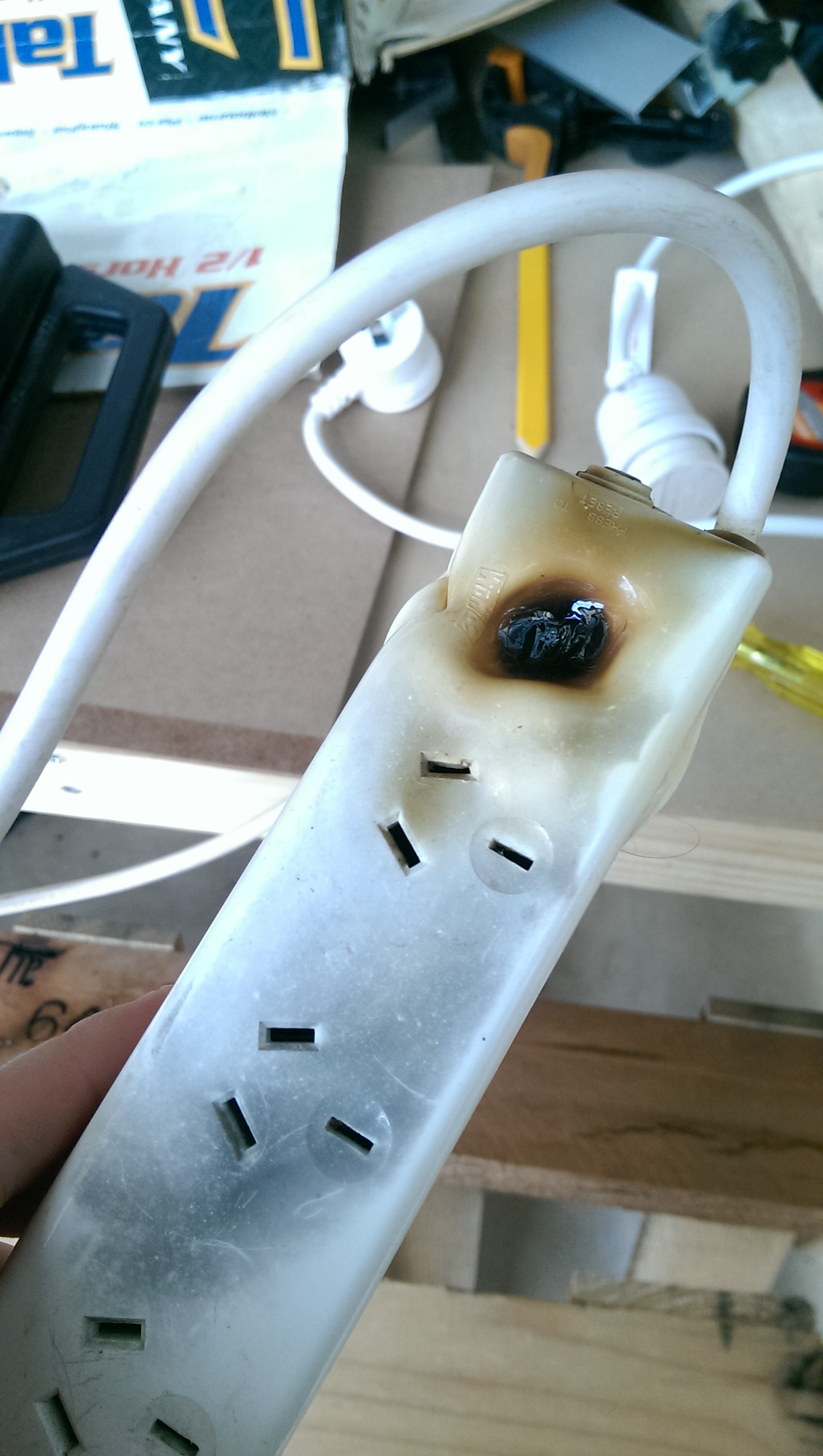 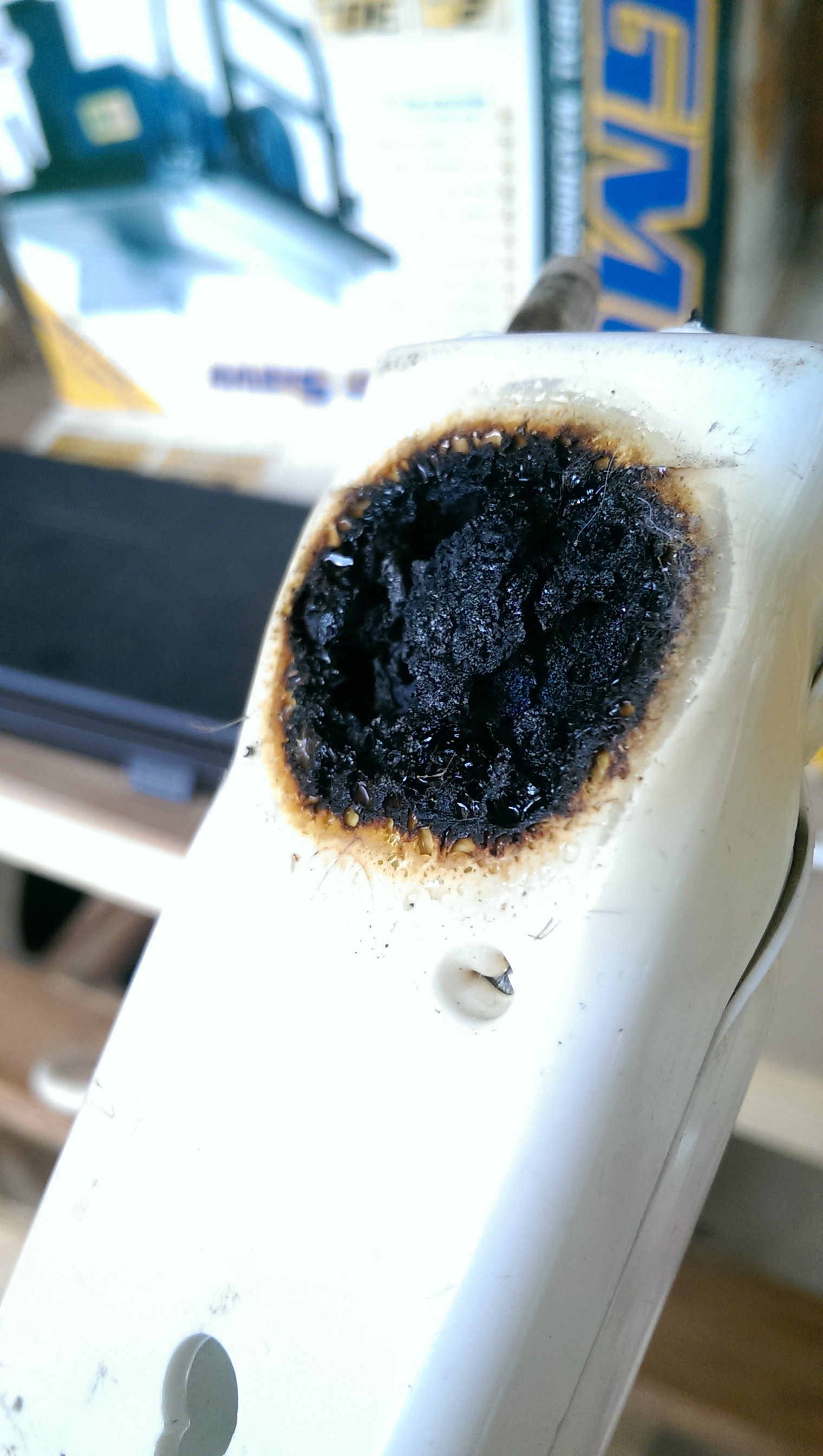 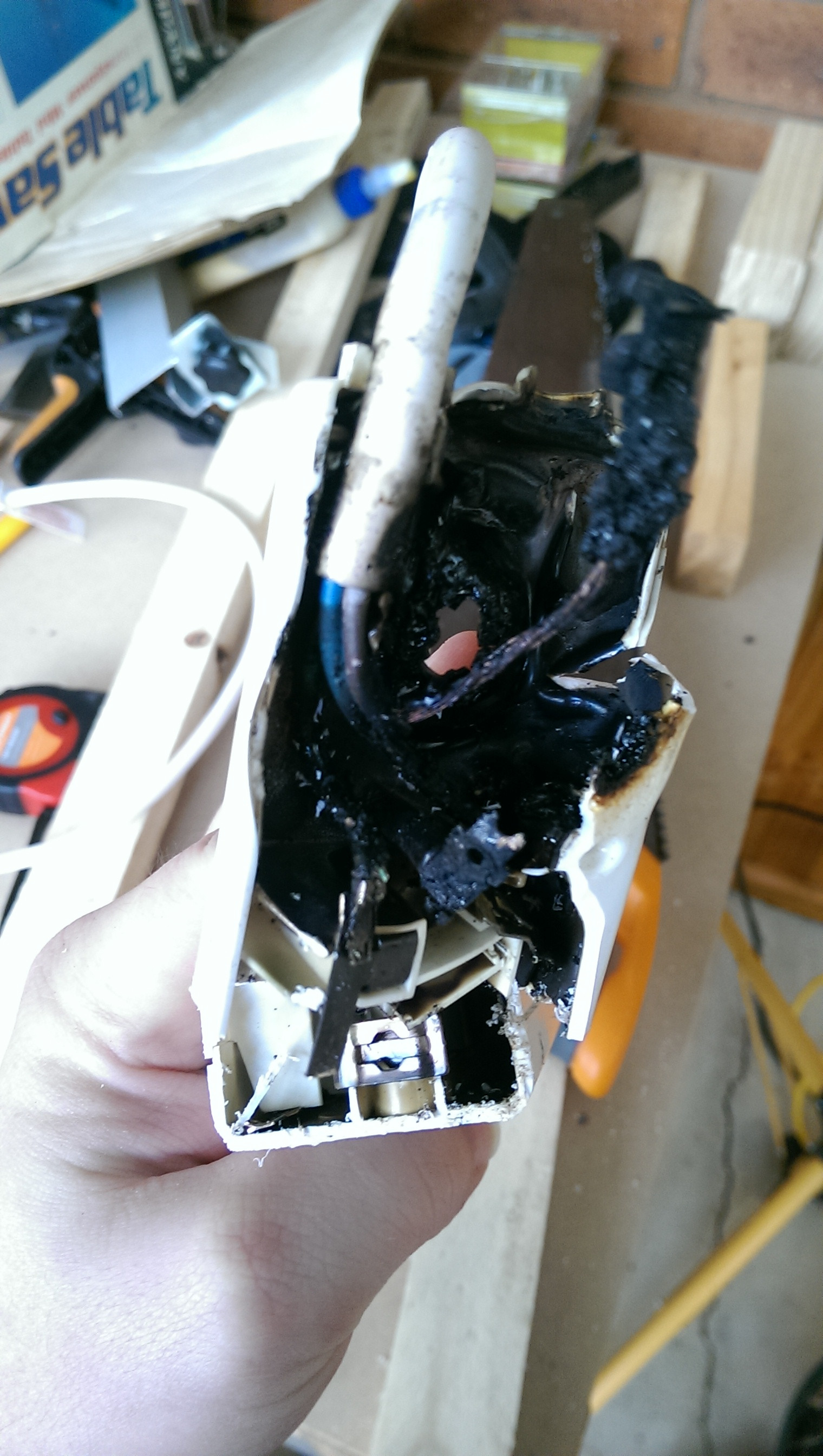 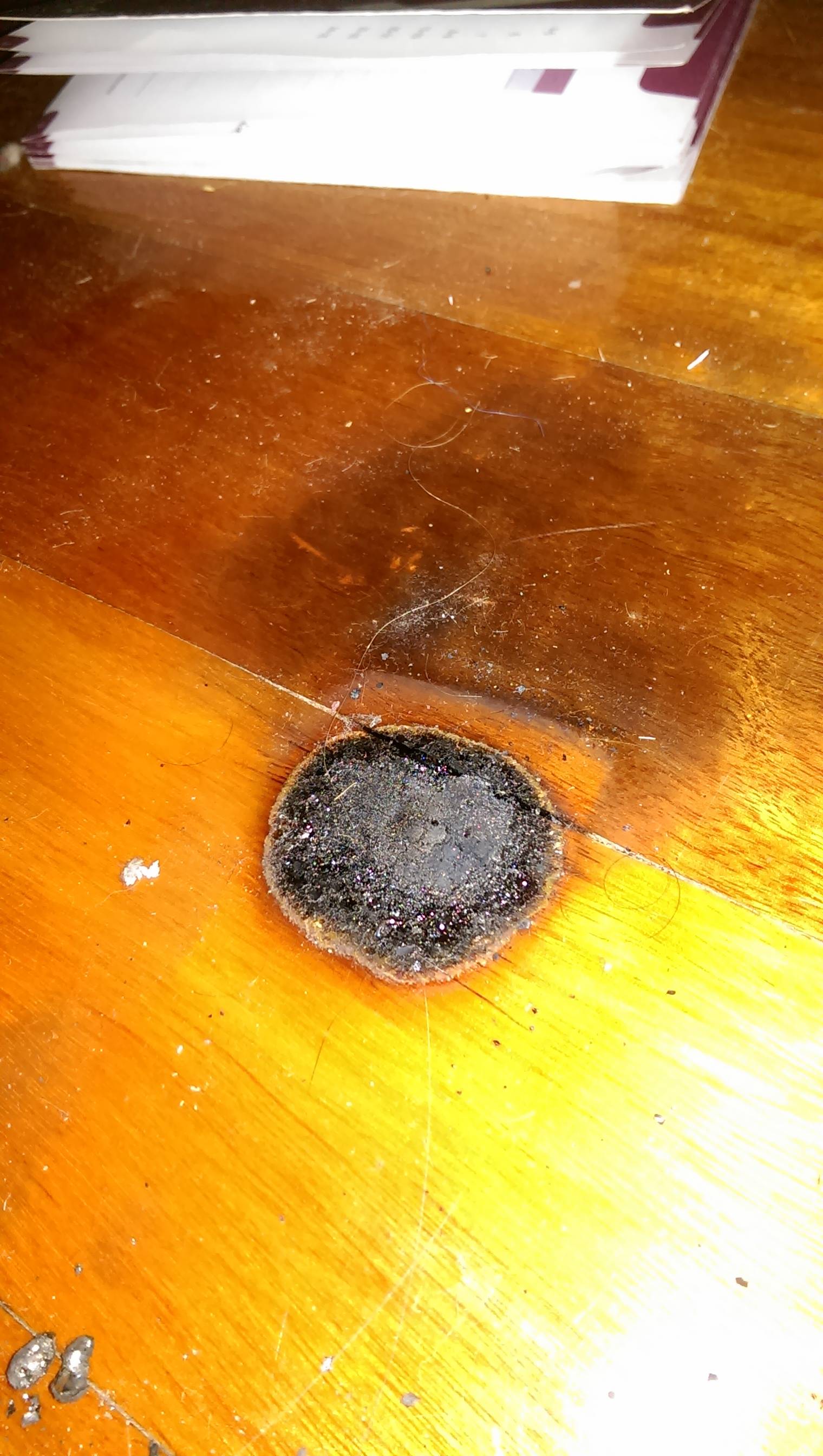 Now I'm not 100% sure on what happened but I believe that there was an oil column heater (2000w or 2400w, we're in Australia so max 240V/10A on a circuit) plugged in to the powerboard. The heater had been on all day and then turned off when people went out. We came home a few hours later to find the powerboard looking like that. None of the house circuit breakers had tripped.

I wanted to find out what happened so I opened up a similar powerboard and found that it was obviously the black box in this photo that was the issue: 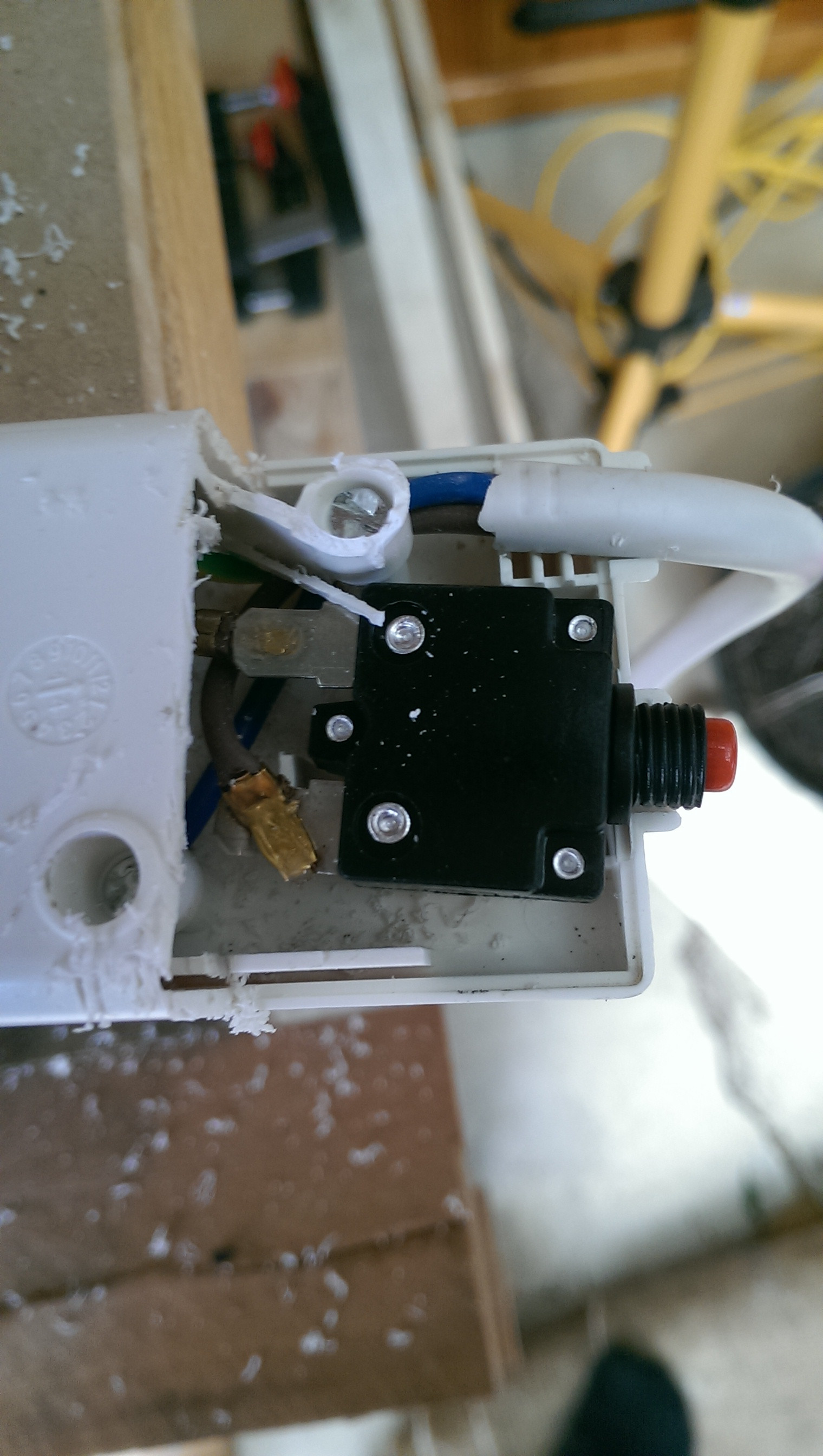 I guess I'm wondering what happened? I was wondering if one of the live wires came loose from the overload switch (black box) and touched the other, causing a short circuit; this should have tripped the house circuit breakers shouldn't it? Could the overload switch have just failed on it's own? Would having the heater running all day have had an effect? The heater running at full power will draw the max allowed from the circuit but there should be no problem running it.

You should never, EVER put a space heater (or other high-draw appliance) on a plug strip!!

Even thought they are rated for a certain amperage or wattage, most are cheaply made and cannot handle the load of a single high-draw appliance. It's not that they will definitely fail, but unfortunately your experience is not at all uncommon.

What happened to yours was likely not a short circuit. That would almost certainly trip a breaker or fuse. It was probably a poor connection inside the plug strip. A poor (high resistance) connection under high load will create a tremendous amount of heat, but will not draw any more current. So a fuse or standard circuit breaker will not see this as a problem. The same thing can happen with a loose plug/receptacle combo. It's all about Ohm's Law.

1
Why would an electric baseboard heater burn the wire connector off the black wires?
6
I shorted a circuit, reset a breaker, now much of the house electricity only works if I turn on a wall AC unit
0
Why does my roof heater consistently trip the circuit breaker?
1
Breakers for living room was working, but has stopped after I turned breaker on/off
2
Wiring new light switch
0
Sockets not working but circuit breaker hadn't tripped
0
Installed new breaker to relieve load in existing circuit. Still trips new breaker
7
Circuit breaker door shocked me. Static?
1
Breaker Breaker, Which should I use?
0
No power to garage