is there such a thing as a pipe brush?

I've used Drano/Liquid Plumbr Foam to clean the bathroom sink drain, but that never cleans enough. There's always scum left over. I think I can clean it better if I follow up the Drano with a brush. So, I'm looking for a "pipe cleaner brush" (name?), but I can't find it anywhere online. I've searched the sites for Home Depot and Lowe's for:

but the search results don't show what I'm looking for.

The brush I need looks like the ones in this search, but I need longer ones that come in various widths (one at ~ 2" and another 1/4").

Where can I find this thing?

I wouldn't worry about the scum left over - what you really need to do is get rid of the BIG gunk that's catching the little gunk that eventually clogs your sink.

For clogged drains, a hand held auger is your tool of choice for cleaning stubborn clogs out of bathroom pipes. 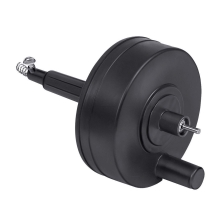 The image you linked to is a test tube brush. It's used in laboratories for cleaning test tubes. If you don't have access to a laboratory supply store, you might also try restaurant supply or homebrew stores for bottle brushes, which can fit into a narrow neck but have larger bristles so that you can clean beer or wine bottles easily.

The term 'pipe brush' I've also seen used to refer to a curved brush that's for cleaning the outside of pipes (curved so you can get behind the pipe easily, which isn't particularly useful in this situation.

'Pipe cleaner' tends to be really short bristles, used by tobacco pipe smokers, but you can also find similar things at craft stores (but I wouldn't suggest using the glittery ones for cleaning stuff)

All that being said -- I agree with the Evil Greebo -- you likely want an auger (aka. 'plumber's snake') to clear the clog. Once that'd done if you still have problems, there are some enzyme based drain openers (intended for slow drains) that will help to digest what's left in the pipe to loosen it up. You might see suggestions online of pouring hot water into the pipes, which will loosen greasy stuff, but for kitchen sinks, you'll end up moving the grease further down the pipes as it cools, which can create neighborhood-wide problems, not just a localized problem that can be easily augered out.

Please know that these kinds of brushes throw spatter everywhere. If you've just poured Drano down the drain and then hit it with a bottle brush, you'll be throwing tiny drops of corrosive, eye-damaging liquid around the bathroom.

It's not pleasant, but the most effective solution I've always found is just to remove the trap. It's usually one or two threaded fittings and then you can clean the pipes out at your leisure, removing all the hair and hair bands, and.....whatever the rest of that stuff is. Bleh.

The suggestion to use a plumber's snake (auger) is the ideal answer to this problem.

If you really wanted to get adventurous and are a bit handy, you could add a bottle brush (sold in most housewares areas) to the end of your snake. You'd find a brush of similar diameter to your pipe, thread it into the head of the auger so that it's held securely (several over-engineered ideas present themselves) and feed it through to really scrub the inside of the pipe.

With that said, the pipes probably don't need to be this clean.

Yes, there is a pipe brush. Home Depot has one

Also if you are going to scrub a pipe, make sure to wear protective goggles or glasses. You don't need Drano or any of the gunk that lines the pipe in your eyes.

Not the answer you're looking for? Browse other questions tagged cleaning pipe or ask your own question.

2
Do 22.5 degree pipe fittings exist?
5
How can I replace this unusual kitchen sink drain pipe?
2
Repair water leak around gas line in foundation
2
Is vinegar really an effective carpet cleaner?
5
Cleaning large amounts of cat urine from an occupied house?
0
Grounding an industrial pipe fitting lamp, which wire to use?
0
What is the name for the brush to clean this humidifier valve on my HVAC
0
How to prevent algae formation in basin pipe?
2
How can I remove the coating from black iron pipe?
0
Is there a Plastic Barb to PVC Pipe pipe fitting?