What should I keep in mind for attic storage solutions for a small home with 14" rafter spacing?

So our attic and our stuff in general is not serving us. Yes, we need to get rid of the stuff we don’t need. If we need anything up there then it is not down here because we need it seasonally (think Christmas tree) or occasional (think my mitre saw). Given the nature of what will be up there, our effort is guided by the following principles (by priority):

So I took some measurements, and played around in Sketchup and found that the key issue was how to make the sides useful and easily accessible. For example, the entire floor width was approximately 29 feet, but only 18 feet had a usable floor, meaning that I was ignoring roughly 40% of the total floor space. This 40% was the most important to use for storage since it is out of the center aisle. If I just incorporate this area, I calculated that I would gain roughly 25 ft^2 of surface area, multipled by the linear feet available which is 80 feet -- meaning we could have 75 cubic yards, exactly half of a semi truck's transportation volume.

Here is what I am thinking now: 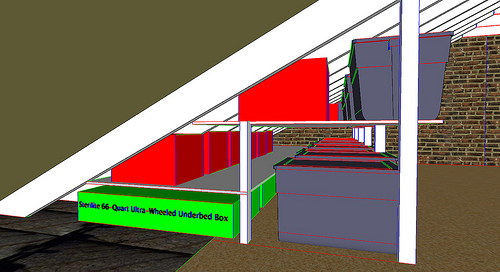 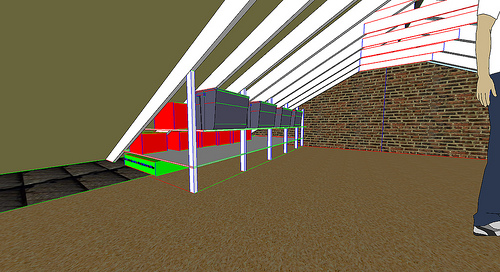 Any thoughts greatly appreciated, but I am asking if this makes sense and:

The attic needs to be able to breath to reduce the heat buildup during the summer and prevent condensation and ice dams in the winter. So don't do anything that would block the air flow from the soffit to ridge vent, and don't place anything in direct contact with the roof. The result is that the rafters shouldn't have any storage items installed between them.

The next concern is floor load. If the attic wasn't originally installed with a floor, it's very possible it's not designed to support the load from a lot of storage. If you ignore this concern, I would make an effort to find any load bearing walls below and build the shelves directly on top of those.

For lighting, my preference is for a single bulb to light the attic space and then use a headlamp to look into the various crevices. But then I'm not up there often enough to make a more permanent solution worthwhile.

One last note, make sure any items you do store up there are capable of enduring the temperature and humidity swings, don't have batteries in them, etc.

Not the answer you're looking for? Browse other questions tagged attic storage or ask your own question.

6
What do I need to use one winch motor independently on several different cables (for overhead storage)?
5
What are the proper materials and method to hang heavy-duty shelves in a garage for storage?
8
Is my attic floor over my garage strong enough to use it for storage and maybe as a small work area?
2
Is wiring laying alongside an attic access opening a code violation or safety concern?
1
Add storage to hidden attic space above garage?
4
What are watertight storage solutions to protect objects from flood water?
2
Can I add insulation to my attic and put down plywood so I can walk around more easily?
0
Adding "floor" to unfinished attic with blown-in insulation
0
Correct use of hygrometer in storage space