How do I seal a large gap between slabs to avoid freeze/thaw heaving?

I have a very large slab patio on the back of my home in Southern MN that has pulled away from the house about 6-8" due to freeze/thaw heaving. The previous owners have filled the gap with river rocks, which gives it an "ok" appearance, but it doesn't do anything to keep water getting in between the foundation and this slab and shoving it out. What can I use to seal such a large opening? 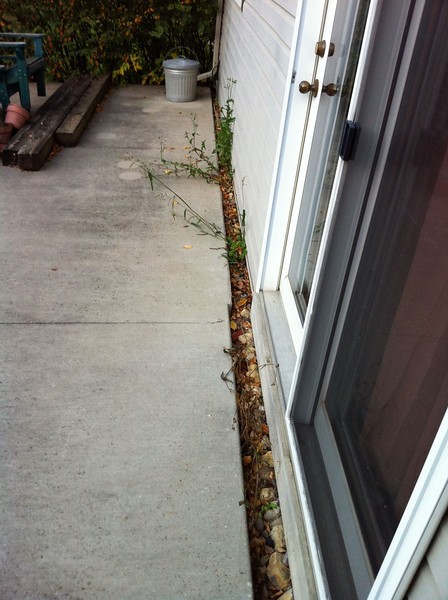 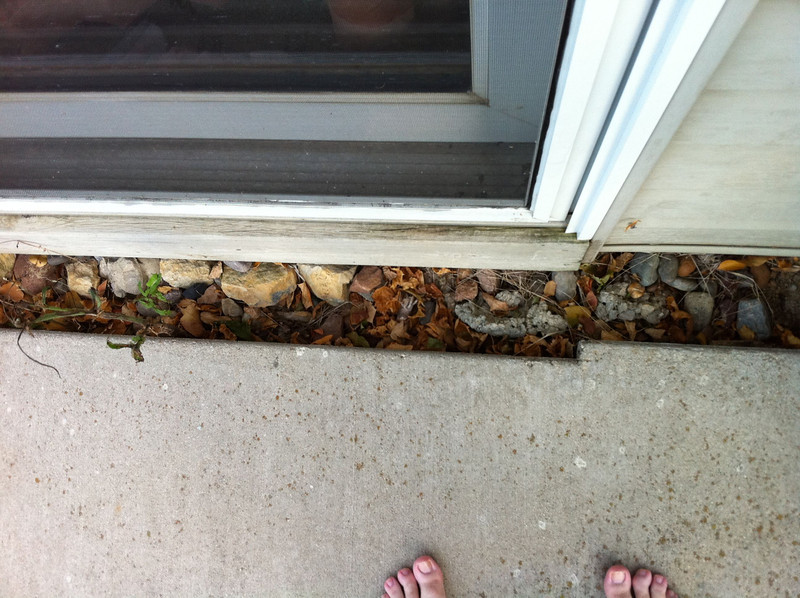 The slab is at least 4" thick through out, as that's how deep the contraction cuts are. I suspect in reality it's at least 6" deep throughout. The far side away from the house is between at least 10" thick on the south end and over 20" thick on the north. I suspect the original plan was for this slab to also support a deck, as there are the remains of steel pins along the top edge of the far side, and there is some suspicion that the master bedroom window directly above the door seen here was originally going to be a walk out door. That plan was thankfully never implemented by the original builders.

The house sits on clay atop sandstone and this back edge is basically at the top of a hill side, from the edge of the slab the back yard slopes away at a 40 to 60 degree slope for about 20', then continues to slope away at a shallower angle for at least another 80' to the creek out back in the woods.

I have a couple of estimates to remove the slab, put in a retaining wall and pave the area with pavers instead of a single monolithic slab - which pretty much everyone has said is the wrong answer for this location. Those are very expensive jobs that I can't afford at this time. Hence the desire to see what I can do to lessen the impacts and give me time to be able to afford to have the pros in to do the right thing.

Based on the pics and the amount of movement alone, I'm guessing that the foundation for this slab was not properly prepared. I'd wager that someone simply dug a squareish hole a few inches deep, put in boards for forms and poured the concrete. Looks great for a while, but doesn't do squat to avoid shifting in cold weather when the water freezes.

A proper concrete slab should be resting on footings that go fairly deep into the ground (the further north, the deeper). Have a look at this image to see what I mean: 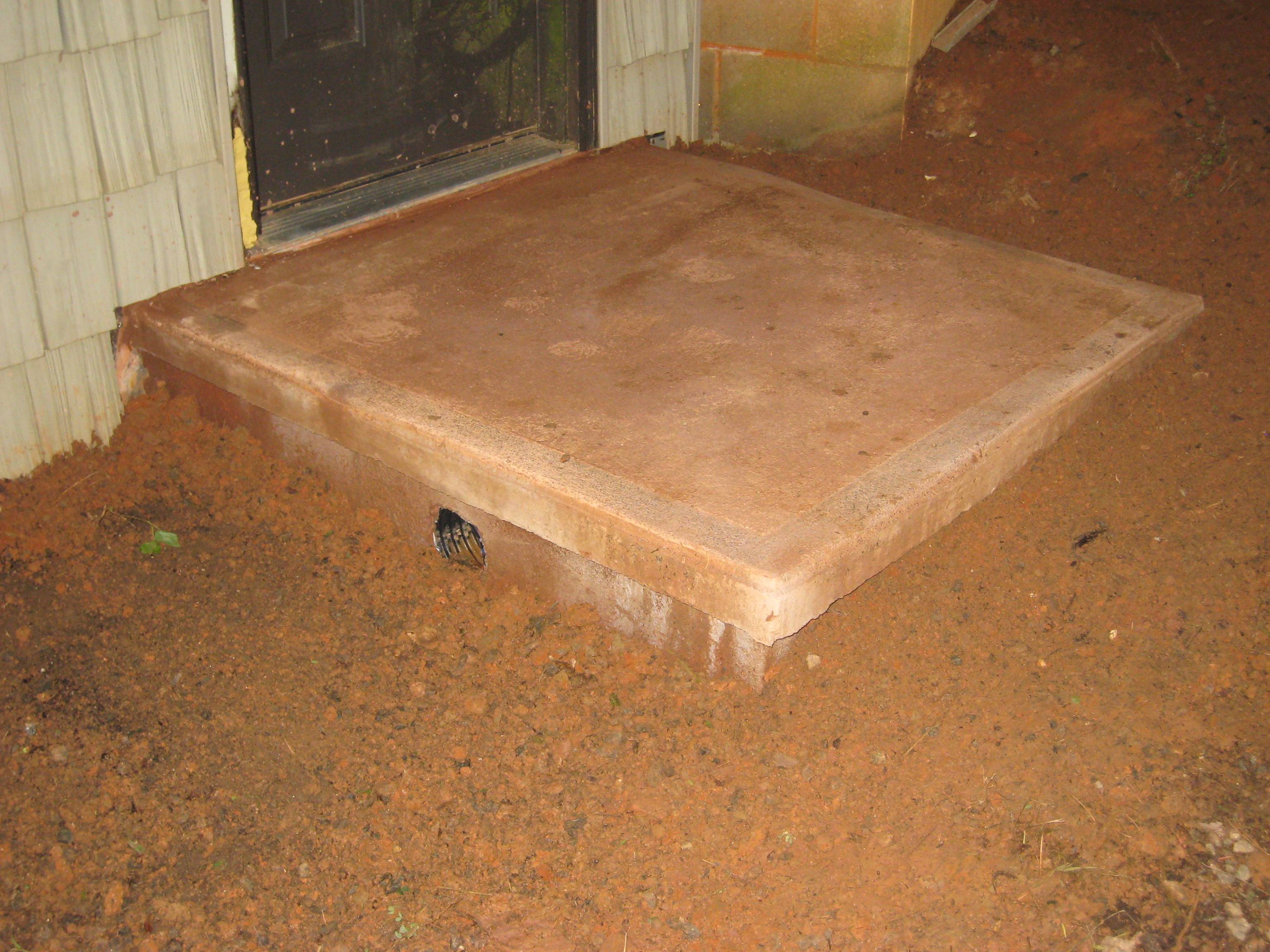 Note how the slab itself sits on a concrete wall? We can't tell how deep it goes from the photo but it should go at least a foot. This is done around the edges, usually, but alternatively, just like with a paver patio, you could dig out a much larger hole - a foot or more all the way down - and then fill with gravel, covered with cloth covered with sand (compacted at every layer) and the concrete poured on that. The purpose of that type of foundation is to give adequate drainage underneath so that what little water remains beneath in a freeze/thaw/freeze cycle has room to expand around the gravel rather than heaving it out of the way. So in short, there's no easy solution to your problem - and no amount of 'sealing' will fix it - water in the ground will get under that porch slab from all edges and continue to lift and move it as it freezes.

Are you sure the slab has shifted and it wasn't simply poured that way? The gap appears to be the width of a 2x4 form. Some theories:

I say that as it appears that your patio looks great and frost heaving would typically introduce all sorts of other issues (cracked patio, buckled foundation wall). It also looks like the edge along the house is finished (bullnosed).

It's good that the slab isn't attached to your foundation (you don't want that as the slab and foundation will settle independently and crack your patio).

If the slab is properly sloped away from your house, I'd suggest aluminum flashing. Get some prepainted stuff to match your siding and tack it up under the drip edge of your siding overlapping the foundation.

Alternatively, the gap appears wide enough that you could pour a sloped concrete border. Be sure to physically separate this from the house and the existing slab and strike control joint in the border every so many feet. Fill the gap with polymeric sand or caulk.

Not the answer you're looking for? Browse other questions tagged concrete waterproofing freezing or ask your own question.

6
How to stop outside rainwater from coming in under the wall and through the concrete floor of my garage conversion?
4
How can I prevent cracking in concrete (or earthen) walls from the freeze/thaw cycle?
4
How to stop concrete slab floor from absorbing water
0
Large gap between foundation wall and patio
4
What's the proper way to address a moisture issue in a concrete slab?
6
What are my options for saving this building?
8
Flooding In New Construction Building
0
Floorplan reasonability check: would need to put a kitchen drainpipe in a concrete subfloor slub
1
How do I reverse the slope of my garage floor?
3
How to seal gap around bottom of shed, between ground and planks?