Brown, yellow, and orange wires in a wall switch

In the wall switch in my condo, there are 2 switches, one with red/brown wire, the other with yellow/yellow/orange wires. Can someone help explain what these colors mean? 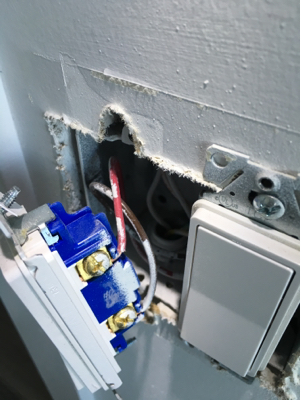 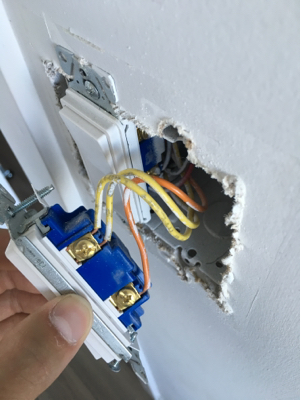 First off -- the only guarantees found in North American electrical code are that neutrals are white or grey (but not all whites are neutral) and grounds are green, green/yellow striped, or bare. Things that are neither ground nor neutral can be any other color -- the reason black, red, and to a lesser extent blue are common is because those colors are what you get with NM cable.

HOWEVER: in a large building like your condo, the wiring will likely be done in conduit instead, which means that you won't find a ground wire (as the conduit subs in for that) and the other wires can be any color whatsoever other than green, white, or grey.

I suspect the yellow wires are hot, by the way, as there are two of them to the same screw on the switch -- that implies that the orange is switched, going off to whatever that switch controls. It's a lot harder to tell on the other switch, but perhaps the red is hot and the brown is switched? Note that a standard single pole dimmer or switch doesn't care which way it is hooked up -- the two brass terminals or black pigtail wires on the switch or dimmer are interchangeable and equivalent.

By the way, when you do put a dimmer in -- it'd be a travesty if you threw a nice, spec-grade switch with wire-clamp plates out in the garbage and put the cheapest builder-grade trash dimmer in in its place. Get a decent spec-grade dimmer from the likes of Lutron, Leviton, or Cooper; it'll stand a good chance of being move-in-ready for whoever you sell your condo to if/when you move out. (The switch is good as a spare, too, if say the next person who moves in hates dimmers, or you need it for something else.)

Rejoice in the conduit. It makes modifications easy - for instance if you ever install a smart switch that needs neutral, you can just add a neutral.

You only think of white and black because those are the colors in Romex. Since you're in conduit, that's not a factor. It's a mark of quality for an electrician to use a multitude of colors in an apparent "system". There is no standard for "hot" colors in the US (except, obviously, don't use colors reserved for neutral or ground). The NFPA's mentality is that you should test a wire's voltage rather than relying on colors - think in terms of industrial setups with multiple voltages.

My guess is these colors designate different circuits or breakers, and obviously one is switched and the other unswitched. Dark colors in one group, light in another. You can't know without putting a tester on it, but once you learn the pattern, it'll make further work easier.

Brown orange yellow signify phase A_B_C from your pole. This is the typical color code for 3 phase. A qualified electrician with a volt meter can tell you what you need to know. If you dont know the significance of these colors your not qualified to work on electricity.

Not the answer you're looking for? Browse other questions tagged electrical wiring repair switch or ask your own question.