How to mount hooks into concrete ceiling that must be able to support several times bodyweight?

I am on the top floor of a loft apartment that used to be a factory. I want to install several hooks or some other fixture into my concrete ceiling from which I can hang gymnastic rings, a punching bag and a swing/hammock. I am about 200lbs and if I were to use a safety factor of 5, each hook would possibly need to be able to support 1000lbs. Given that there is inevitably a higher impulse everytime I get on/off the rings or punch the bag, would the 1000lbs be sufficient? Which then leads to - how and where can I get hooks or some other type of fixture that would be able to take this load and how can I get them into my concrete ceiling?

I do not have experience with home improvement so I would appreciate as much details as possible.

I would attach a wood 4x4 or a steel lintel or another type of heavy angle iron to the ceiling.Then from there you can hang what ever you want. I would attach it every 16" O.C with a redhead 1/2" wedge anchor (available at any home center). They are rated for 5,000 lb pull out force. If the concrete was rated at 5,000 psi you could hang your car from just one bolt. Since you dont know how strong the concrete is the other bolts will act as back up for each other. Also because you dont know how thick the concrete is only go with 2-3 inches of penetration. You dont want to go through the roof.

Checking with my engineer-minded girlfriend, we've got too many questions to be able to answer this. The concrete, which is intended to support a dead load, may not be able to support the moment loads that you're planning to put on it. Without having a structural diagram for the entire building and detail on what the beams are intended to do (such as -- are they of a type that is webbing to support a lateral dead load only to hold the walls together? how much load is already on the beam and where? What kind of shape is the concrete in, and how well reinforced is it -- remember it's almost 100 years old!), no one but an engineer could really tell you. Concrete, even reinforced, is a very brittle substance.

You will need to be attached to a structural portion of the structure. In the following picture of an all-concrete warehouse type structure, note that the structure is the columns or piers (vertical elements) and beams (what rides on top of the columns and ties the columns to the walls). Note that in the picture's case, nothing is attached to the beams. That's probably because the beams are there solely to provide a framework for the roof. The things that are attached to the ceiling do not move and therefore are "dead" loads. 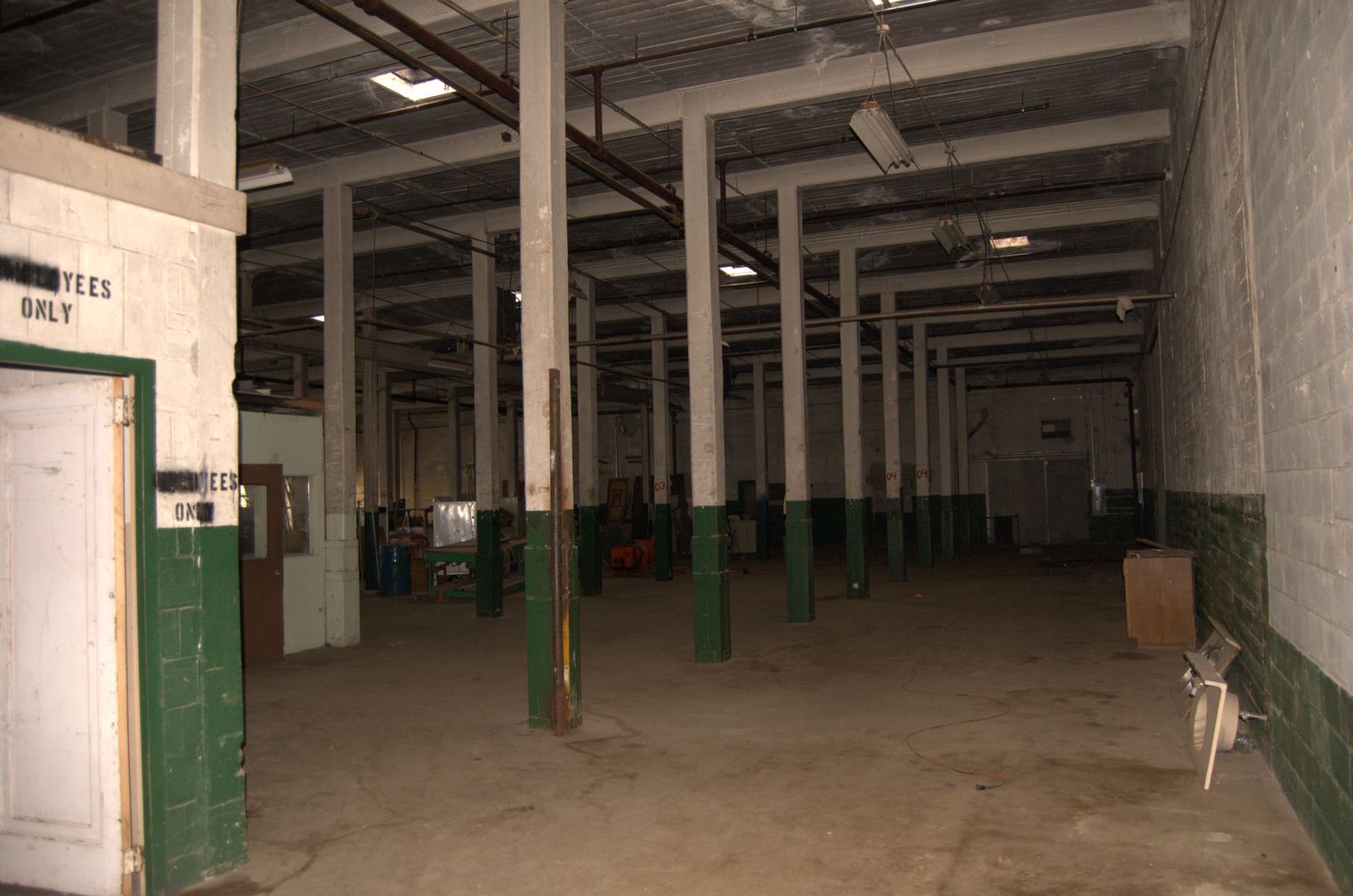 If you do not have access to one of the beams, you do not want to attempt this task... the concrete you will try to attach to will crack inwards when the moment load is applied to the points. If you have side access to one of the beams or columns, you can probably fasten a plate to side of the beam or column and use several bolts to attach the plate, and then use a metal pole to span between the plates. A metal bar or pipe of sufficient thickness will be elastic enough to absorb and flex with point moment-loads where a single or pair of anchors in concrete will crack.

Since it's an apartment and is not solely your structure, most of the solutions we could devise if the beam is sufficient to support the various types of loads would include drilling a permanent hole four inches into the beam and then affixing an expanding sleeve bolt with a backup of permanent masonry epoxy. Drilling with a hammer drill and then installing an expanding sleeve bolt carries a large risk of cracking the beam. Since you are living in a shared structure, this is probably not advisable. You will need to check with any homeowners association or deed covenants, which may restrict you legally from performing modifications to the building's structure in such a way that could be detrimental to your neighbors and cohabitants.

Here's an example of the anchor type I'd use to anchor into concrete:

They are made by ITW RedHead and are available at most home improvement stores.

Talking over possible solutions with my girlfriend, who is not a structural engineer and knows nothing of your structure, she suggested using a floor-mounted framework. Her crossfit gym has a gymnastics framework that bolted together into a secure structure that would be sound against several kN of force and would spread the load on the floor instead of trusting the overhead structure. They also would not involve a permanent modification to the structure. I'm not sure where you'd find something like that; I've seen the one at her gym and it looked custom made to me.

I would be very reluctant to bolt directly into a concrete ceiling for what you're doing for two reasons:

If you really wanted to do this, the most important thing would be to use the longest bolts that you could, as when the concrete fails, it's going to rip a cone of concrete out (assuming the bolt doesn't just come loose, and if it's longer, you might feel it slip first and get some warning). The longer the anchor, the larger cone it's going to have to rip out, meaning the more surface area that's going to be required to break.

I'm not professional engineer, but I still have some of my college text books at home, and might have some of the formulas to calcuate the strength, but you'd also need to know the characteristics of that specific concrete mix.

I hung a heavyweight workout bag with the anchor recommended here in a concrete ceiling. Used some epoxy as well to set anchor. Attached eyebolt with a coupling sleeve to anchor bolt. Marked bolt and nuts to monitor any movement or working lose. 1/2" bolt sneered after about 16 months of uses between the jam nut and coupling. Will try the angle iron with two anchors to better absorb shock during use.

Not the answer you're looking for? Browse other questions tagged concrete hanging mounting or ask your own question.

6
How do I hang a chair from a concrete ceiling using a single hook?
2
Punching bag mounted on ceiling in flat