Air conditioner works in an outlet but not a timer

The end of the air conditioner plug has a box thing with a light that is normally green. It never turns green when in the setup I described, and pressing the test button does nothing. 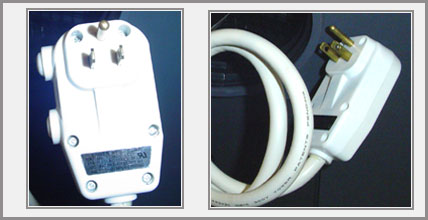 It sounds like your air conditioner plug has a built in circuit breaker. If so, the breaker probably needs constant current to remain set, even when the unit is nominally off (a small trickle current is being used by the breaker and its light).

If that is so, the timer would prevent the breaker plug from getting current for its standby state. It then might have to be reset before the unit could start.

You can confirm this by plugging the unit into the wall outlet and getting it to start. Then turn off the circuit breaker at your main panel. The unit will, of course go off. When you turn the breaker back on, if the unit does not start up, you probably need to reset the plug breaker. This will mean the timer system will not work.

If a timer is critical to you, many newer AC units have a built in timer setup.

ADDENDUM As I think about it, the culprit is probably the ON/OFF switch circuitry in the unit itself. Once power is removed by the timer, the circuit goes off and will not restart until the ON/OFF button is pressed. Unlike a mechanical switch (which retains electrical contact whether or not power is present), an electronic switch is really a momentary contact switch that sends a pulse of power to the circuit that then locks itself on. It always has to be reset after loss of power. If so, the timer simply will not work.

Newer units with built in timers always have power to their timer circuits and that circuit then turns on the AC circuit at the designated time. External timers shut the whole system down, and it can't restart itself.

Not the answer you're looking for? Browse other questions tagged electrical air-conditioning receptacle appliances or ask your own question.