The clothes dryer in the garage is plugged into what appears to be a NEMA 10-30 socket (receptacle). 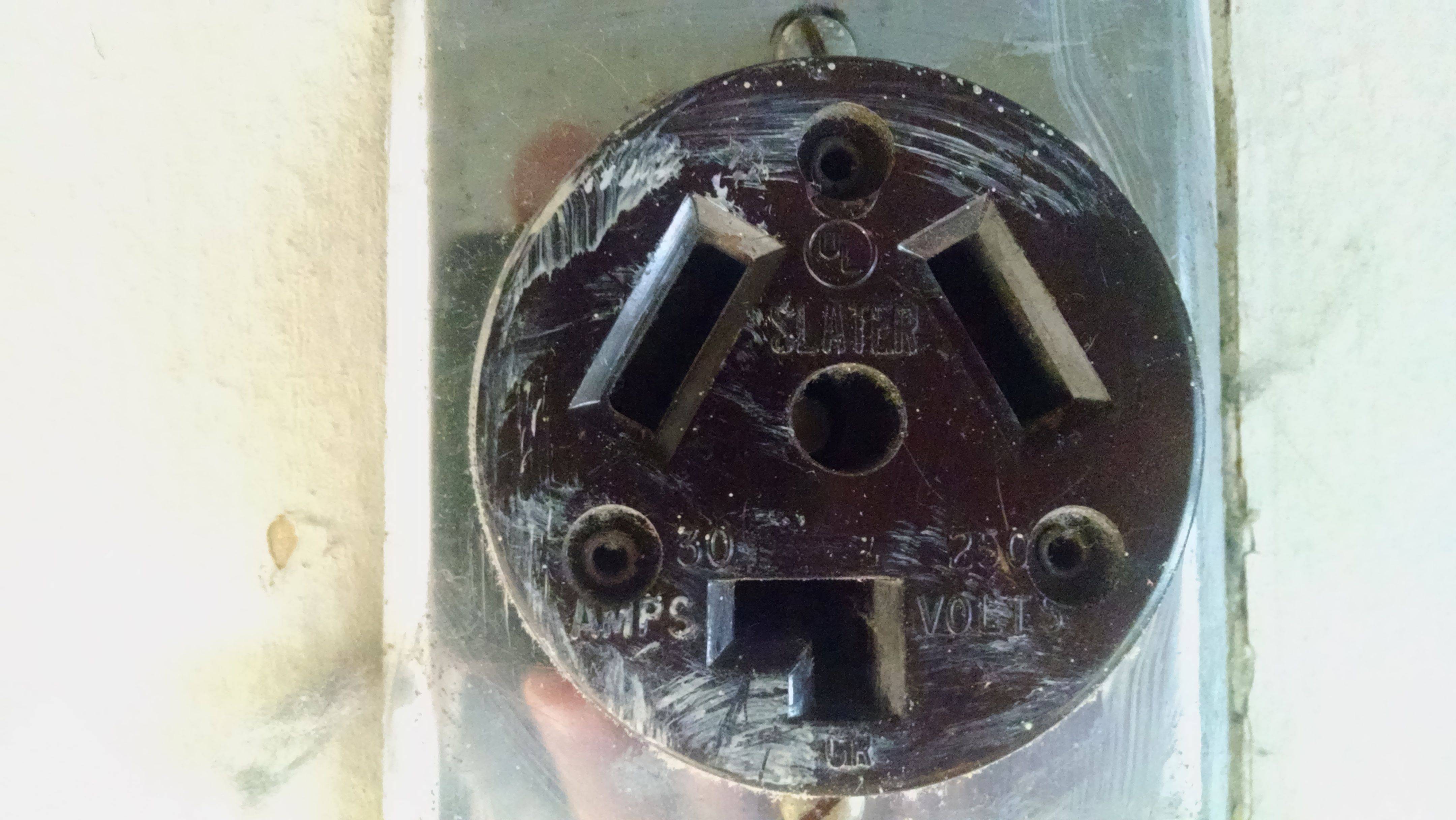 Reading the voltages on the socket with a multimeter, the voltage between the two diagonal blades is 240 V. 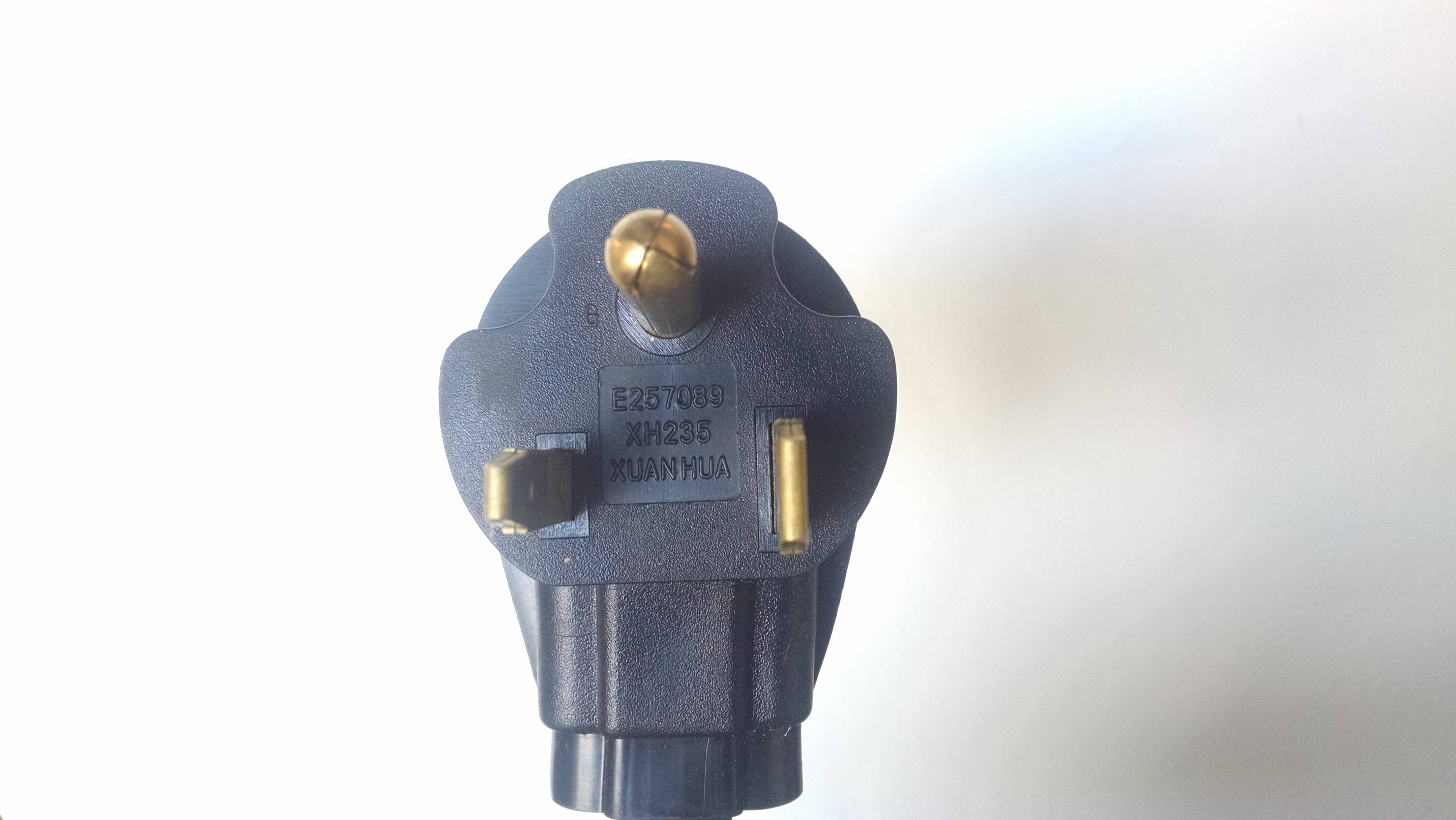 The welder can sense whether it's being fed 240 or 110 V and switch automatically (the 110 to 240 adapter that came with it is passive, just a short cable with specific connectors on each end).

EDIT: I should add that the machine, according to the manual, draws less than 30 A continuously even at 100% output settings. Not sure why it has a 6-50 plug - probably because that's pretty standard for welders?

You should NOT plug a 50 ampere device into a 30 ampere circuit!

No, 120V to Neutral (Grounded) or Ground (Grounding) is perfectly normal for US/Canadian electricity supply. 240V line to line, 120V line to neutral or line to ground.

Of course, if you plug a 50A welder into a 30A socket, things might not work so great on the high current end.

The welder needs hot-hot-ground. Remember your welder's metal chassis is grounded, and it grounds the work via the clamp. It has to get that ground from somewhere. It needs ground so that a fault inside the welder doesn't electrify the things you are welding.

Hold on there. Neutral is not ground.

I know you really want ground so you can run your welder. But NEMA-10 does not supply ground, it supplies neutral, and that is not an acceptable substitute.

The link to that adapter just shows anybody will sell you anything on the Internet. It certainly does not have a UL listing, he's just going down to the electrical supply, buying the ends and a few feet of cable, building it, and selling it to you at a big markup. (Probably to cover his insurance; just kidding, his insurer has no idea he's doing this, and would cancel his policy if they knew.)

NEMA 10 is an obsolete way to hook up dryers and ranges that is ungrounded. When the idea of "grounding" came along in the 1960s, they got the hare-brained idea to bootleg ground off the neutral. That's grand, but if the neutral wire has any trouble, this definitely will electrify the chassis of the machine. It's a single point of failure with a body count, and was outlawed in 1989, but they didn't mandate retrofits.

Connecting a welder is right out.

However, in 2014 (actually somewhat earlier for dryers) they liberalized the rules to allow retrofitting (just) a ground wire instead of having to replace the entire cable run. You can run a #10 AWG ground wire via any available route, from that receptacle to any of a) the service panel it's powered out of... b) any junction box connected back to the panel by metal conduit or #10 or larger wire... or c) anywhere on the Grounding Electrode System, i.e. The copper braided wire from the panel to your water pipe, ground rods etc. You cannot just tap any water pipe. Note you can retrofit this ground without even opening up the service panel, which makes it easier.

Once you bring a Real Ground to that socket, you can change the socket to a NEMA 14-30, which includes both hots and neutral and ground. If you still have an electric dryer, find its instructions on the web and change its cord to NEMA 14-30 (key thing is, remove the neutral-ground bootleg jumper). Now your dryer is up to modern Code. Side benefit!

Now it's legit to plug in a welder there.

What's the deal with welder amps?

Welders are a strange bird when it comes to amp ratings and wire size. Stuff is allowed with welders that wouldn't be allowed anywhere else.

The math can be pretty gory. But here's the takeaway: if you are plugging a welder with a 50A plug into a 30A circuit wired with 10AWG wire, this is not the end of the world. Most likely if you are doing intermittent duty-cycle welding (as one would assume welding at home), and you ran the gory math, you'd find that 10AWG wire is perfectly legal. Code would advise changing the breaker to 50A, but if the 30A breaker isn't tripping, leave it! Dual-use of the socket for the dryer is good reason to leave it that way.

Not the answer you're looking for? Browse other questions tagged electrical 120-240v or ask your own question.