24v from a double circuit outlet

1) If I turn both circuit breakers off, I measure 0V from both outlets.

Is 24V normal? Should I expect 0V, when one of the circuit breakers is off? 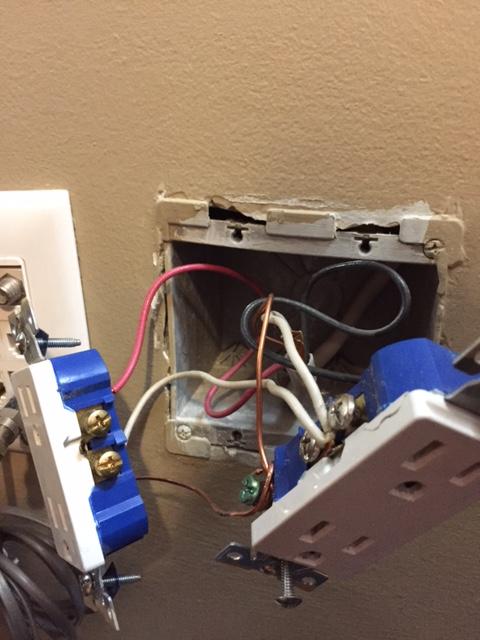 Anytime a dead wire runs parallel to a hot one, it will pick up phantom voltage. You can see it with a rather sensitive voltmeter like a modern DVM, but it won't do any useful work. In other words this is an issue with your voltmeter. Stick a dollar-store nightlight in each outlet and that will eliminate the phantoms.

The bigger problem is this shared neutral. Neutrals do not have circuit breakers. Two hots on the same neutral can overload the neutral, and I notice some scorch marks and heat damage on that neutral wire.

The only way "sharing a neutral" can work is a special arrangement called a multi-wire branch circuit (MWBC). Each hot is on a different "leg" of 240V, and the neutral only carries the difference in currents. Becuase of numerous mishaps relating to shared neutrals, Code now requires you install MWBCs in a way that guarantees they are wired to opposite poles. Such as using either a 2-pole 240V breaker or two adjacent breakers with listed, approved handle ties. I can tell you are not to modern Code on that, because you can turn each side off individually.

The most common mistake with MWBCs is using duplex/tandem breakers, or half-width breaker arrangements which put both breakers on the same pole. This guarantees a neutral overload situation.

If only one breaker is on, then the other hot is floating. Which means a digital multimeter could measure anywhere from 0 to 120.

Also, it looks like maybe the neutral screw terminals are loose and charred.

4
Unexpected voltage with switch turned off

2
How should I wire a switch/outlet combo to a split outlet if the feed is at the split outlet?
1
How can I replace circuit breakers with GFCI breakers when it is a multiwire branch circuit?
1
Converting a 3 way circuit from controlling outlets to controlling a fan
1
Problem with a circuit that has only 2 outlets, one is fed from breaker and that one feeds a 2nd outlet, 2nd is not working anymore
1
Separating a circuit with existing 12-3 wiring
2
Mystery circuit breaker causing odd behavior in other circuits such as polarity switching and power on ground
1
Wiring a receptacle from a ceiling box in a basement