How can I straighten twisted studs?

I have a bunch of 2x4s that are twisted and warped. Is there a way to salvage them?

If the 2x4 is not too twisted, then you can probably just use a clamp or a block. Start by fastening one end of the stud in place, and then use one nail to fasten the other end. The nail should be placed such that one of the edges of the stud is centered (as it should be). The other edge (lets call it edge B) will not be on center until a clamp or block is used to straighten the stud. If edge B is off center such that it is closer to the adjacent stud, the a block should be inserted between the two studs. Once the stud is aligned with the appropriate center, nail it in! Or if edge B is further away from the adjacent stud, a bar clamp can be used to pull it back toward the center.

If the stud is very twisted, you can relieve much of the stress with boiling water. You will need to boil about 1-2 quarts of water. With the twisted stud in place, (3 nails in it) begin pressing/untwisting it with a block or clamp. After you have untwisted it partly, wrap a towel on the on the area (2 to 5 ft) with the most twisting and pour the boiling water onto the towel. Pour slowly allowing the hot water to contact and saturate the wood. After a few minutes continue to apply pressure with the block or clamp. It may take up to 10 minutes for the wood to begin to soften. Again, once the stud is aligned with the appropriate center, nail it in!

Note: boiling could soften the wood too much, and allow compression failure. Source: (http://www.primitiveways.com/bending.html). So, studs treated with boiling water should not be used for load bearing walls. 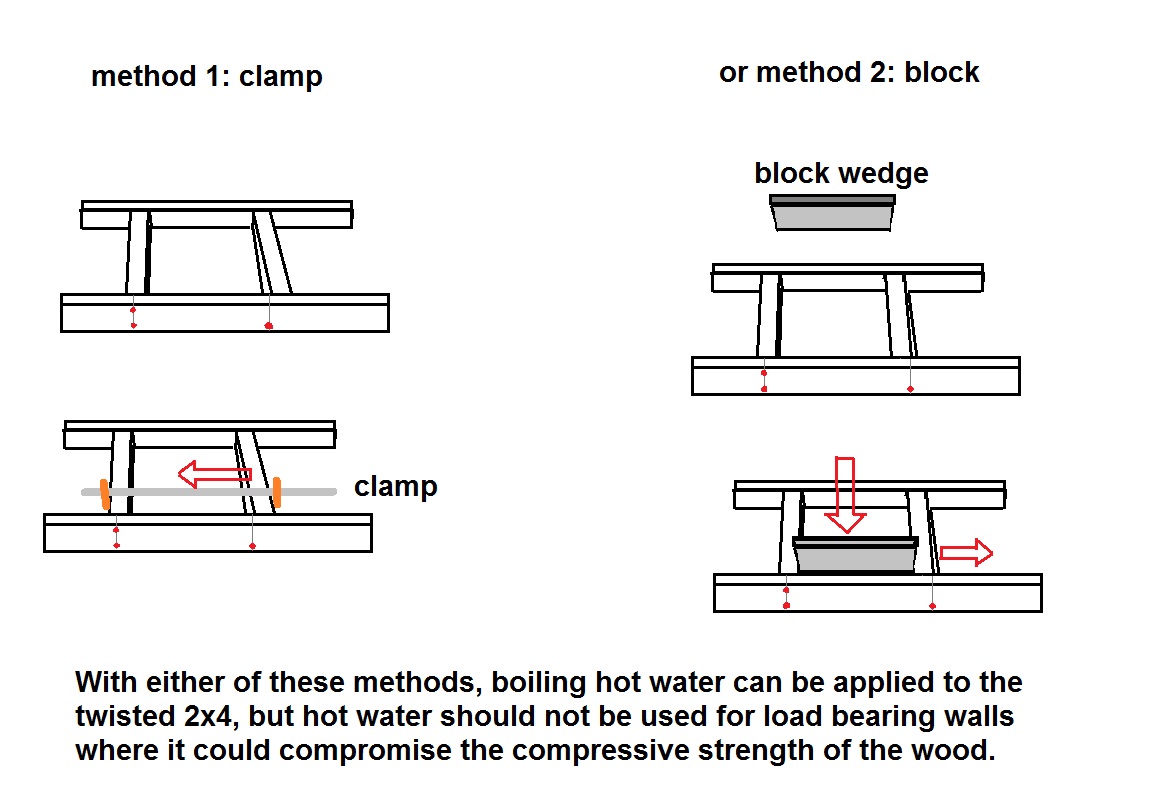 I have used wet rags / towels and a heat gun if I take two long in making bent wood "butcher block" counter tops. With bad 2x4" I will use them in shorter pieces for fire blocks (ok now 2x6) or find other uses because if not dried straight they may twist again if only anchored at top and bottom in a wall. If you have a large number I did see 1 contractor soak some hemp fir in a pool over several days, then stack them tightly and put a 1 or 1-1/4" inch sheet of plywood on top , then he parked a tractor on them over night, the next day he flipped the boards and stacked them tighter put the plywood back and put the tractor back on top. I did not think this would work but it did, day time temps were in the high 89's low 90's. I just cut them to shorter lengths.

Not the answer you're looking for? Browse other questions tagged woodworking framing studs or ask your own question.

21
How do I find studs when stud finders won't work?
9
My house has steel “2x4s” in the walls, can I hang cabinets, a TV, or some other heavy item from them?
4
Can I use 2x4s to extend studs so I can mount my TV?
1
How can I hang a closet rod where there are no studs?
1
How tight should studs be when framing in place
3
I need to find out how to straighten a wall
0
Can I straighten a 2x4 with just a planer?
1
Use 2x4 Studs 90 Degrees from Normal
1
Twisted Wall Studs In Tub Surround
1
How can I install a TV mount to metal studs?