Foundation for structure on bedrock

We have the mixed blessing of a giant swath of exposed Canadian Shield on our property in Ontario. Literally a big flat area of exposed rock, no soil whatsoever.

Scale is hard to see, but a satellite view looks like this: 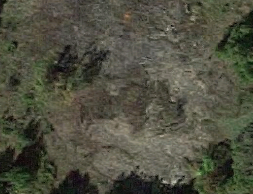 In our area it has been tested to have a bearing weight > 10 000 pounds per square foot (basically high enough that the number doesn't matter anymore). We have the pieces of a high tunnel style greenhouse (32 ft wide, 96 ft long, 24 ft high in the center), like this: 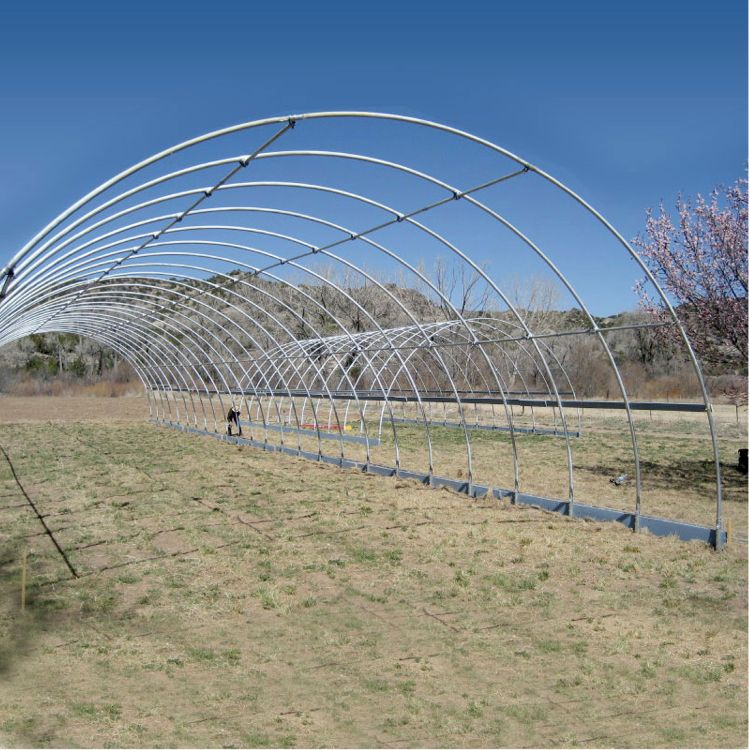 Perhaps foolishly (no one we've spoken to in the area has tried to permit a greenhouse), we took the plans to our local permitting office. The only particularly difficult part we've run into is the foundation. As purchased, the plans were for a standard installation with a more house-style foundation. We were presuming that it would be extremely easy to do a foundation as frost heaving and bearing weight aren't a concern. The only engineered diagram we've gotten past the permitting office is a 24" tall x 14" wide concrete beam poured directly on the bedrock. 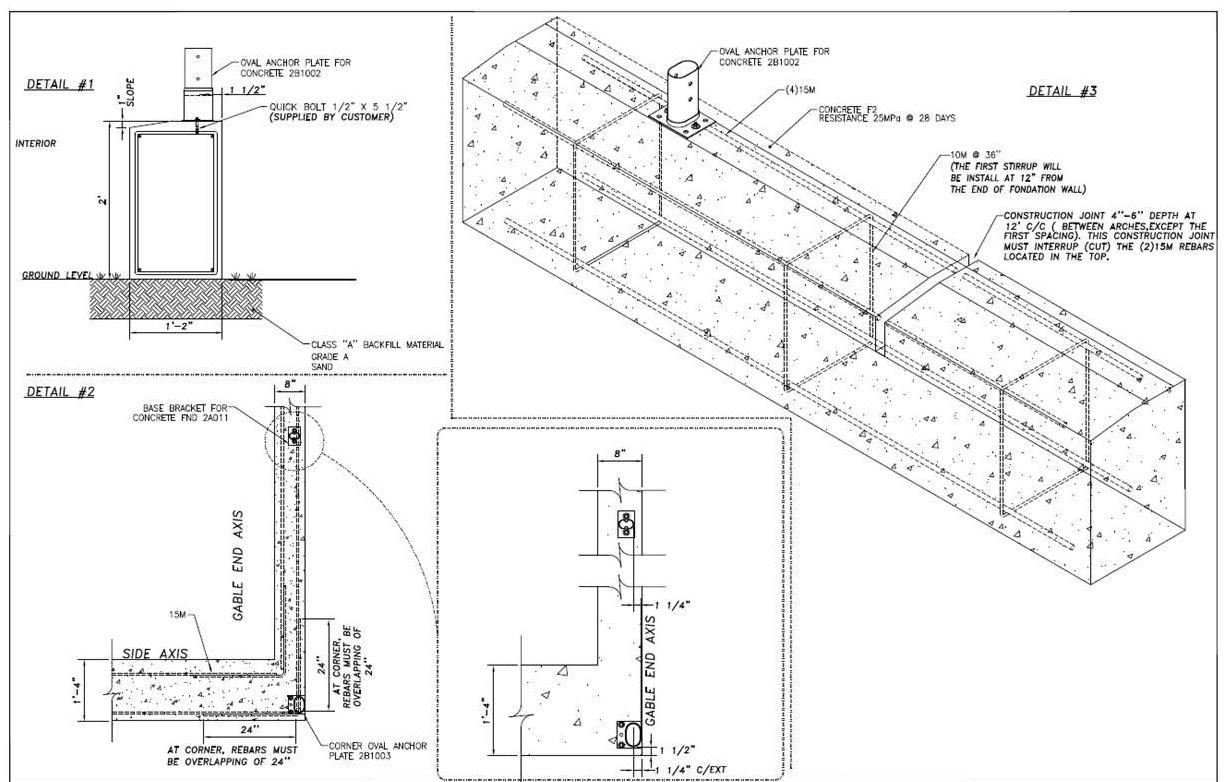 Our issue is that this seems to avoid all the benefits that exist with the exposed bedrock, makes it virtually impossible to do ourselves just due to the volume and the associated risk of mistakes, and is crazy expensive without much perceived value.

I've seen this related question, which basically ends up with something like this: 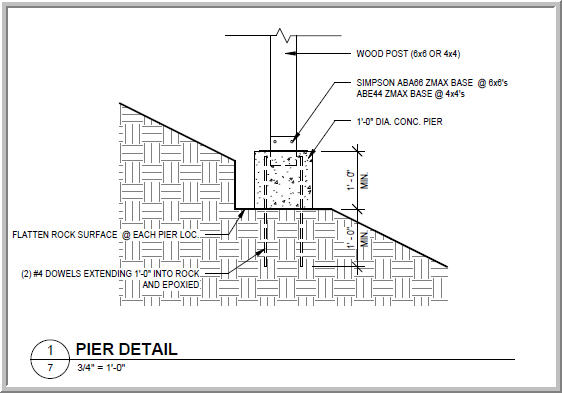 Are we missing why this same principle cannot be applied with just enough concrete to level out the area and provide a consistent and level wall to form the perimeter of the structure? Is 2' high really required, or is this a case of the engineer getting fed up with the back-and-forth with the permitting office and over-engineering it?

Are there any other options we're missing to accomplish the same end result - a blocked in bottom perimeter that can support the greenhouse "hoops"?

Note: We haven't measured the grade over the entire length, but it can safely be assumed to be < 6" after clearing away surface dirt, loose stone etc.

Late Update: After building a few small outbuildings, we were misunderstanding the concerns addressed in the design. The massive foundation is essentially a humongous anchor. If hurricane force winds come through (and in this imaginary scenario I guess the plastic holds to the frame better than the frame to the ground anchors) the foundation is spec'd so the whole building doesn't lift up and blow away. All that to say the bearing weight and heaving are not large concerns as we were thinking they are.

To summarize, it is almost exclusively uplift which is being addressed by the massive amount of concrete. No engineers are willing to say the bedrock is really bedrock without a (hugely expensive) core sample (I guess the system works?), so the building has to be designed to not fly away with no consideration of the uplift resisting ability of the ground underneath, or fastening systems attaching to the ground.

I'm not a licensed engineer, but I've been involved in building structures, block, skirted, footing with a kick wall. I do have a BA in Industrial Techlology (the guys that fix what the engineers thought was a good idea) twits.. The biggest issue with what you are trying, IMHO (in my humble opinion) Site preperation. You have to get that exposed rock shining. Then you need to use cord for leveling so you Identify your site high spots. A chalk line might help with that. you'll have to try. Next is your anchoring. Even if the frost goes down 5' 2-3' anchored into the bedrock ought to be enough. This is going to require a drill on a platform, one you rent. You will need a 36" carbide teeth, x 1" masonary bit. I'd get 2, oh yes they are expensive! Talk to your county engineer, explain this to him, it will NOT go anywhere. Drill a 24" x 1" hole in the rock. cool it with water, a good flow. Get your drill on a GFI if you want to live! From the contractor desk have them order a case of rebar epoxy. you may want the pheunuematic tube gun, save your arms & hands. After this is all approved...

cut 4' sections of 3/4" rebar, fill the hole you've drilled and lived, (after 3-4 hot days) cover them tight maybe a cork. That gets you to the wine/beer making store. LOL When the holes are fully dry, use the epoxy to fill the hole, put in the rebar. You can cut the top off at a hight agreeded upon with your engineer. Personally, I'd put these every 12". If they end up being 18" high, then wire tie 2 full length's or 1/2" rebar around the whole foundation, minus the door. You'll make this then ~12" of foundation, epoxied into the rock, with 12" concrete. If there are specs on your frame for pre drilled spots, use those spacings. Then on the top, drill a 1/4 or 3/8" hole just above the frame line, room for a big 1" washer. Find the company that still cuts nails, they are tapered. You slam that nail, just above the washer, and pound the narrow end down. with those 12" footings, it will give you a nice base for a level concrete floor. That thing is NOT MOVING. IMHO in my humble opinion... but I live in an 1854 post & beam, hand adzed timbers house. I tend to over build. It really sounds like a fun project. work out the rebar anchors w/ the engineer, and a poored futting 12" high that has horizontal and vertical rebar. The square nail for the wedge in the locked hole, should top it all off. Hope this works for you... let me know ok? JLH

Try rock anchors drilled into bedrock, either epoxy in or a Hilti rawl. You can carry out pull tests which will give the force needed to pull out the anchors. This should then be enough information to see if the bedrock is strong enough to hold down the structure and how many anchors will be required.

This should be a lot cheaper than the concrete beams and a lot less hassle, a core sample of the bedrock could be taken and tested.

Not the answer you're looking for? Browse other questions tagged concrete foundation building-regulations or ask your own question.

3
Can I rest cement posts directly on the bedrock to build a structure for a large shed?

4
How many concrete piers do I need to support a 10 x 10 wooden floor supporting a 1600 lb shed?
0
Can I dig up next to my foundation to add height below my deck for storage?
3
Proper backfill for a trench dug below foundation level (within the 45 degree cone of support)
0
Can I use hydraulic water-stop cement to fix foundation leak?
2
Pier foundation and water table issue
2
Large concrete patio poured against the foundation - should it be tied to the foundation or not?
3
Foundation concerns with 40 year old home
1
Foundation next to salt water, on bedrock
1
Unfinished basement - options for exposed concrete wall in finished room