Why is my shower head pipe very loose when the company installed a new tub and surround?

I don't know what the pipe is technically called, but it's the one that you attach your shower head to. Well, after the guys finished the job and left yesterday, I noticed that this pipe is very loose. I can move it to the left or right an easy 2 inches either way. When I told him about the loose shower pipe, he blamed it on the previous installation when it never did that before with my old shower.

Also, when I checked the tub faucet head for movement, I swear I heard something fall and hit the subfloor behind the wall. I told the guy about it and he said it was probably some blocking that fell and that it's probably nothing to worry about.

He said he'll come out and look at it. In the meantime, can anyone shed more light on this based on what I've told you so far? Is there anything I can do now to secure the shower head pipe in place? What could that falling sound possibly have been?

This is a picture of one example of a rough shower plumbing install: 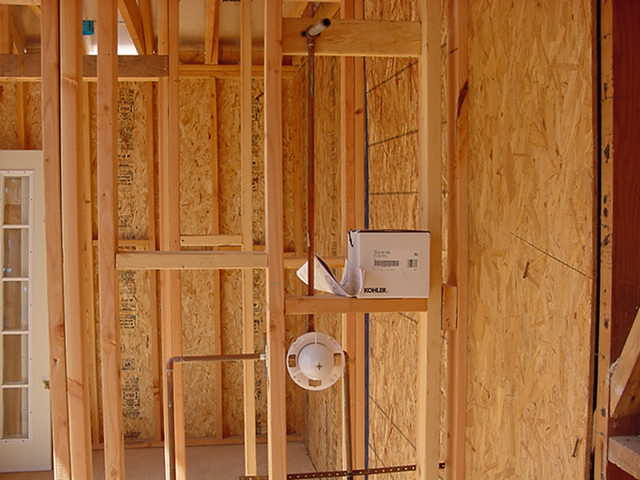 As you can see, at the top there is a cross brace, and there is a 90 degree angle that's been mounted into that brace secured, preferably with screws but possibly with nails.

Basically, your pipe moves and it shouldn't. They probably did something to the strapping of the pipe in the wall. These pipes are supposed to be "strapped" or tied into the 2 x 4. Maybe what you heard was the strapping falling but regardless you are left with a pipe that moves. I have a brand new bathroom and the same problem. All the tiles are up and we came up with this and it works! NO glue, NO chalking, NO Foam!

Solution: RUBBER GROMMET (Google them if you don't know what they are). Basically they are a thick rubber gasket with an indent all the way around. They come in any size. Measure the diameter of your pipe and the size of the entire space around the pipe. Length and width. We used a rubber grommet that was less than an inch in diameter, made a cut so you can open the grommet up, slipped it around the pipe, the tile fit into the indent all the way around the grommet and voilà, no more moving pipe.

2
How to install shower 'S' pipe
0
Shower heads calcifaction and blockage
0
Dripping hand held shower head in off position
0
Shower head on exterior wall - Insulation R-30 Rock Wool
0
Why does my re-plumbed shower come on whenever the tub faucet is opened?
0
My Shower Head Screws Into A 1-1/4" Pipe!! How Do I Upgrade/Replace?