Is there a “Right” direction to build soffit with plywood?

Is there a right or wrong way to face the plywood when building a soffit for ductwork? I was following a tutorial from Family Handyman http://www.familyhandyman.com/basement/how-to-finish-a-basement-framing-and-insulating/view-all

which has the plywood facing on the "inside" side of the duct. 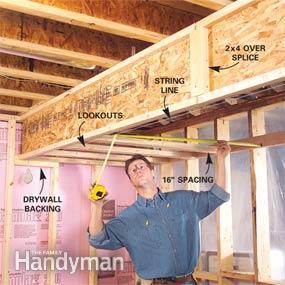 Seems like almost all of the other tutorials I've seen, they have it on the outside, and they seem to use OSB instead. Is there a prefered side, and does it matter if using plywood vs OSB?

framing soffit
Share
Improve this question
asked May 17 '16 at 1:35

Putting the sheathing to the outside makes hitting backing easier when hanging drywall, etc. On the other hand, it may be easier to hang the verticals pre-assembled if the sheathing is to the inside, as you can then screw through the 2-by into the joists unobstructed. From a structural standpoint it does the job equally well inside or outside. Do whatever makes sense in your situation.

OSB is more dimensionally stable than plywood (so you're not fighting warp while you build), and it's usually quite a bit cheaper. For this purpose 7/16 or 1/2" is more than adequate as the drywall adds support as well.

I think you have misinterpreted the picture in your posting. The OSB is not really on the "inside" of the soffit. Instead that part of the soffit in the picture was constructed using some I beam structural members that are made with OSB material notched into upper and lower 2x4s (or possibly a 2x3s).

The fact that they show the flat 2x4 over the splice point of two of these structural members implies that upper and lower members are 2x4s with half inch OSB.

So as can be surmised, there is no real preferred side for the OSB/plywood. It can be on the outside, inside or in the "middle" as in the picture. Material choice is really one of preference with OSB being a good choice if cost is a factor. If you elect to match the picture and use the structural I beam you will normally get OSB material anyway.

Not the answer you're looking for? Browse other questions tagged framing soffit or ask your own question.

0
Insulating attic with no soffit vents.
1
Attach drywall directly to framed soffit without plywood/osb
2
How should I build a low profile stud wall in a basement?
2
Load considerations on framing members that are only attached to concrete?
2
How can I make self-tapping sheet metal screws go into metal studs more easily?
1
Vapor barrier problems
1
How to build a wall under duct work
0
Framing basement bathroom: original builder didn't account for wall wrap when laying bathroom drains?
1
Help me build this soffit