Does a (non-splitting) cable splitter degrade the signal?

I have cable and cable internet in my new apartment. The cable comes in to the water-heater closet from the roof and comes out an outlet in the wall of the closet, but there is a 4-way splitter in use before the cable gets to the outlet. It's not used to split the signal at all; the other three output connectors are empty.

Since I added cable internet service (and used a 2-way splitter after the outlet), my tv cable signal is a little fuzzy on some channels; and I was wondering if the cable splitter in the closet is to blame. Could I buy a simple connector to replace the 4-way splitter and see an improvement; or would it be the same, since the splitter isn't actually splitting the signal?

I believe it is splitting the signal, each output will have a specific loss associated. Some splitters will unevenly split the signal (commonly called a tap), which is handy to give a better signal to a longer run or to the cable modem. You can get a straight through connector at any HI store. That said, even these will have some loss of signal, just no where near as much as from a splitter. 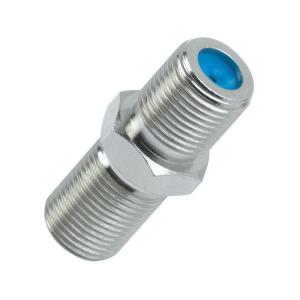 3dB is 1/2 the signal strength, basically on a two way splitter, full power goes in, 1/2 comes out each leg as long as there is termination impedance on all (cable or terminator cap) ports.

If the splitter is a passive device you will get loss despite having nothing else connected, as signals reflect off boundaries etc.

If you need a splitter, a powered one (which typically amplifies and cleans the signal by filtering noise) would be a good idea. Otherwise, the straight through mentioned by @BMitch should at least help reduce noise.

A cable splitter WILL result in a degradation of the signal, even if the other ports are unused. One thing you can do is to add terminator caps to each unused port. They are supposed to reduce the degradation.

Note that cheaper cable splitters will actually have a different amount of signal loss for each port. You may see some numbers stamped next to the port itself, something like -2DB, -4DB, etc. This is the signal loss that that specific port will give.

Use a high quality cable wherever you can. Cheap cables are a serious source of signal loss. If you can hold the cable in your hands and see the signal change on your tv, then replace the cable with a good one!!!!!!! I have found that a quad shielded RG6 cable seems to be a good cost effective solution. If you are unable to find one in the correct length, then buy the cable by the foot and attach the cable ends yourself using the proper tools.

Splitters all degrade the signal somewhat. Look for a db rating (usually between 3 and 7 db) marked on the splitter itself. This is the signal loss, (in decibels, a logarithmic scale)

A 3.5 db signal loss represents approximately a 50% decrease in signal strength. Usually this isn't a problem, particularly with digital signals (it either gets through or it doesn't) as there is lots of excess signal strength in the feed. But, a second splitter in the chain can degrade the signal another 50%. I'd look at replacing the useless splitter with a straight through connector, which should help.

Also, look at lower db splitters at the tv. While significantly more expensive than the cheapo's, they are still in the $10 range, so it won't break the bank.

If I understand correctly, you are using a power divider which is designed to split the incoming signal four ways, and you have three of these with nothing connected. High frequency signals, such as cable TV, depend on uniform signal paths.

One analogy is if you imagine a creek that is split into four smaller creeks. The water ends is split into four parts, each with a quarter of the water, but all of them going the same speed (Though in reality, it'll reduce the speed a bit, so you get just under a quarter of the water-power in each of the small creeks). Now, in your situation, you have three of the creeks blocked. All of the water will end up going down the open creek, but it'll slow down the speed significantly (and make a bunch of nasty waves in the process).

Power dividers do the same thing. They work less well and generate reflections and other problems when their outputs are left open. One solution would be to properly terminate each of the output ports with a 75 ohm impedance which would reduce the interference problems. But, it would be much better to replace it with an adapter (straight through connector) which properly joins the two cables.

So, the answer is yes: Not only are you only getting perhaps 20% of the cable TV power going to your TV, but the splitter is likely also causing signal interference.

unterminated cables cause reflections of the signal back up the wire. The result is very complicated and can affect the clean-ness of the signal at your cable modem. Terminating with 75 ohm terminators help reduce this reflection to zero, but do not prevent the splitting loss from happening (this is because the terminator looks like an infinitely long cable to the rest of the system, the reflections never come back.

8
How do I crimp an F-connector onto RG-6 cable?
1
what sort of cable should I use to add extra tv outlets
2
How can I use the existing structured wiring panel to get internet throughout my house?
0
Best way to divide TV roof antenna to several rooms
1
How can I run voice over existing coaxial cable?
4
Connect Network Expansion Board/Patch Panel to Router
2
Threading cable through existing pex-like tubing
2
Punchdown patch panel with no RJ45 ports?
0
Does Cat6(A?) cabling require special considerations?
2
Issues with CAT3 Cabling