I've just moved into a house which has a secuirty light. It's off during the day and it comes on frequently during the night even when there's seemingly no motion outside.

I'd like to be able to disable it, but the switch which controls it only seems to have two settings: constantly on, and sensor triggered. I want to know how to set it into a mode where it stays off until I turn it on with the switch.

It sounds as if the light is being controlled by a single 3-way switch. The hot lead is run to the common and two switched hots are run to the traveller terminals.

You could create a master switch by adding a single pole switch that interrupts the hot lead before it goes to the 3-way. You could expand the box holding the switch to a 2-gang type and wire the new switch with the existing hot lead and a short pigtail from its second terminal to the 3-way common. 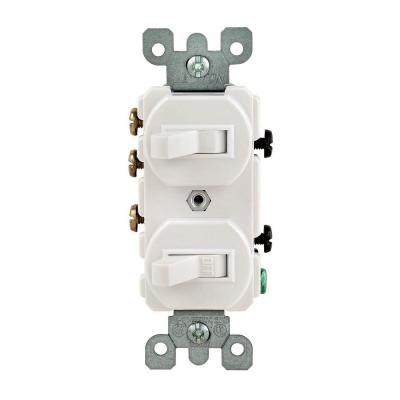 In this case, the pigtail runs from one terminal of the master switch (the single pole switch) to the common terminal of the 3-way. if you are using a dual 3-way, just leave one of the traveler terminals unused.

In either case, the white (neutral) and ground leads are left connected, just adding a pigtail from the grounds to the new switch.