Did I miss the stud when I drilled into the wall?

My drill bit didn't have any wood shavings on it. Did I miss the stud?

Operating just outside of my DIY comfort zone, I have erected a picture rail on the wall about 50mm from the ceiling.

The picture rail is going to bear a load, so I used my brand new stud finder to find the studs. They were where I expected to find them - both in the corners and spaced 600mm apart between them, so I was feeling good about that.

Very near the ceiling, the stud-finder was triggering constantly, so I figured there was some sort of horizontal beams as well, but I stuck to directly in line with the studs running up the wall.

The AC detector was triggering near light switches, but nowhere near where I was drilling, which was reassuring. I wasn't expecting any pipes in that wall.

When I examined the drill bit afterwards, I expected to see white plaster dust and some sawdust and wood shavings, but there was only plaster dust.

This was repeated three times.

Whatever was behind the plasterboard accepted the screws. The picture rail is up, and seems to be supporting sufficient weight, but I am left worried that I did this wrong, and want to check before I erect any more picture rails.

It sounds like you may have metal studs. That would explain the difficulty drilling through, followed by the void beyond. 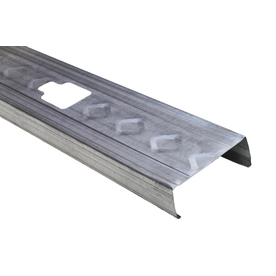 Not the answer you're looking for? Browse other questions tagged drywall studs or ask your own question.

0
Small stud wall to sloping ceiling under stairs
2
Drilled through one of the biggest walls in my house and hit some sort of black plastic (likely PVC). Did I just drill through a water pipe?
3
What did I drill into?
3
Drilling, hit metal running vertical floor to ceiling
2
Problem mounting TV wall mount / possible cracked stud
1
Can screwing too far (about 1.5 inches) into a stud can weaken it?
1
Problems Using Stud Finder on a Textured Wall - Due to Finder or Texture?
0
Can you weaken a stud by drilling too close to the edge?