I have a double kitchen sink that the contractors installed several years back. See picture. The main sink is on right side and smaller sink is to left. They installed the disposal to the main sink because space was tight and we have pull out trash drawer in space under shallower left hand sink. Our galley kitchen is small and we were trying to get the most use from the space.

Now when I run the disposal, nasty water shoots back up in to the left hand sink. At first I thought there might be a clog in the wall after the small drain but if there is a blockage, it is short lived because once I run the disposal for less than 30 seconds, the water goes back down in small sink and all is fine with no slow water draining in either small or large sink drains. I just want to eliminate that initial burst of nasty water in the small sink. I think the problem may have to do with air pressure due the design of the connections. There are separate connections to the wall for the sinks as you can see from the attached. And the main stack and vent are located about 4ft to left of double sink.

I am wondering if it would work better to connect the small sink to the same drain as the large sink if I could get fit together in the tight space.... I appreciate suggestions.

PS there is no sewer gas smell coming from the small sink as long as I remember to run a little water to fill that P trap before I run the disposal. But if I don't run water in the Left sink P Trap, I still get the nasty water shooting, but it just comes with the lovely aroma of sewer gas. 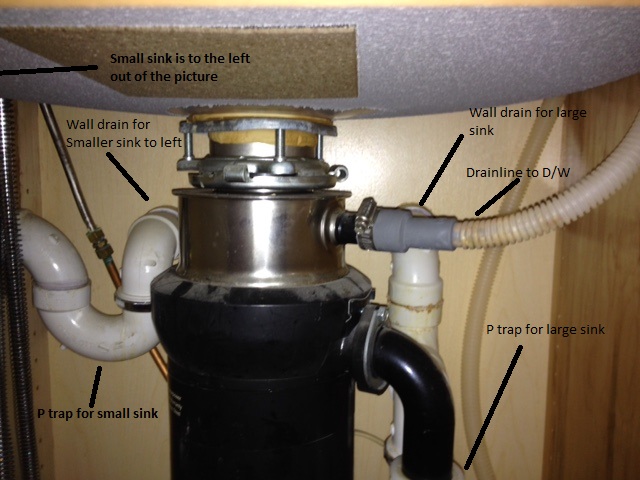 And the main stack and vent are located about 4ft to left of double sink.

It seems you needed your vent to be to the right of the sinks. Although the installation is apparently within code for the length of a single trap arm, when the disposal forces water into the drain it is backfeeding the small sink trap. Having the vent to the right would allow air pressure to equalize in that direction instead of through the small sink.

A simpler solution might be a backwater valve for the small sink. Although it may be difficult to find room for it but then you were thinking about moving the disposal so maybe there is room.

It's difficult to tell for sure based on the photo, but it looks like you're trying to make water flow up hill. It looks like the wall drain for the disposal is too high, which is causing too much water to be in the "trap". 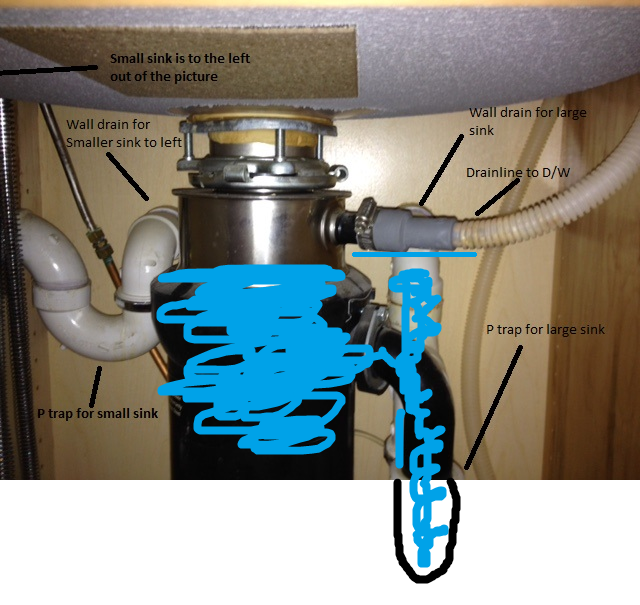 I've marked the trap weir in the photo with a blue line, and indicated all the water that will be in the "trap" with blue squiggly lines. It's difficult to tell from the photo, but it looks like water might even be sitting in the disposal. That's way too much water in the trap, and it's going to cause problems.

I can't see the plumbing behind the wall, since my x-ray vision does not work on photos. However, I suspect that as the disposal dispels that large volume of water, some of the water is forced back into the second sink drain. Without knowing how the drain lines meet, it's difficult to say if it's done properly.

During normal operation the disposal won't be shooting a ton of water down the drain, so it shouldn't be enough to back up into the other sink. In your situation, the disposal is initially pushing a larger volume of water. The problem goes away after a bit of running, because the large mass of water has been eliminated, and it's back to a normal operating volume.

Eliminating the overly deep "trap" could alleviate the problem, though to do so you might have to modify the plumbing inside the wall. Lowering the drain line for the disposal, will also require you to lower the drain line for the other sink. This could require opening up a large section of wall, as the entire length of drain will likely have to be lowered.

You could check with the manufacturer of the disposal, to see if the elbow coming out of the unit is required. If not, you might be able to modify the plumbing under the sink to reduce the depth of the trap. However, if the disposal outlet is lower than the wall drain inlet, eliminating the elbow isn't going to make much difference.

You may have to move the disposal, or eliminate it altogether.

Not the answer you're looking for? Browse other questions tagged drains or ask your own question.

4
Double sink with disposal - water shoots up when disposal runs

2
What are some causes/solutions for poor drainage?
5
Do I need a separate vent stack for my kitchen sink?
13
How can I prevent or remedy "bio slime" accumulation in a sink drain?
3
Water heater overflow outside drain pipe
1
Why is dishwasher water backing up in my sink?
0
Water Seeping Under Fiberglass Shower Drain