Is an Ionizer Air Purifier effective against birch pollen?

I spot an Ionizer Air Purifier Air Cleaner Air Ionizer and I want to understand whether it could help to alleviate symptoms due to birch pollen particles such as itching, tiredness and shortness of breath.

Is a negative air ionizer effective against birch pollen particles?

air-conditioning ventilation health-and-safety
share|improve this question
asked May 7 '16 at 11:03

It's hard to tell from the product page, but it looks like this is just an ionizer, with no fan or filter. If so, then all it does is emit ions; it doesn't remove anything. The theory is that it will charge particles (e.g. birch pollen), which will then attach itself to nearby surfaces, thereby cleaning the air. Unfortunately, these are more effective at generating ozone than actually cleaning air, and ozone, whilst very helpful high in the atmosphere, is very bad at ground level and in the vicinity of people (e.g. lung damage).

This is different from a true electrostatic precipitator, which emits ions into a fan-driven air stream, but immediately collects them (and any ionized particles) on plates parallel to the air stream. These work very well, but are larger and more expensive than simple ionizers, and emit some ozone as well.

I found an article on Effectiveness of Home Air Cleaners in Reducing Indoor Levels of Particles, sponsored by Health Canada. It compares various ways of improving indoor air quality. Another useful article is a Consumer Reports overview of air filter types. Based on these, a standard HEPA filter (thousands of models available), or perhaps a portable electrostatic precipitator (I couldn't find any) would better meet your needs.

I could find two answers: no and yes. The no was marketed by manufacturers of large air purifiers containing full-blown HEPA while the yes by the below research on asthma, disabilities and seasonal affective disorder (SAD). Because people allergic to birch pollen are more likely to develop such disabilities unless proper interventions, this material is relevant to people having symptoms due to birch pollen. If birch pollen creates symptoms such as shortness of breath, itching, tiredness, coughing or other asthmatic symptoms, the benefits of negative ionizer can surpass the cons such as ozone particles generated. If you have bad asthma, the ionizer may worsen the symptoms or you just need to select a negative ionizer certified not to generate too much ozone.

P.s. Of course, the ioniser does not replace waterfalls and Aloe Vera Barbadensis Miller, Stockton plantations that can alleviate allergic symptoms.

The ionizer can create ozone which can worsen asthamatic symptoms due to pollen. Also, it does not attract dust, pollen and allerges by the video. 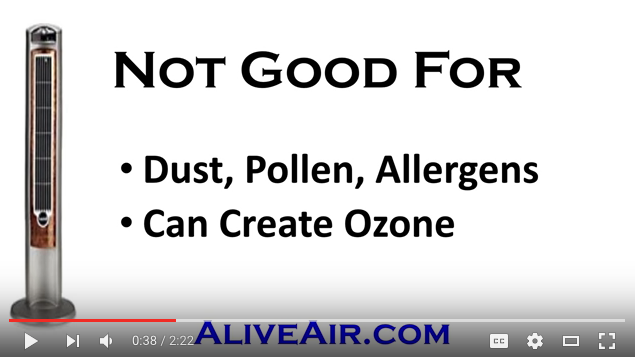 As collected in a more general earlier thread, ionizers generating ozone are in Air Cleaners to Avoid. This video was on marketing a purifier with full-blown HEPA and other properties -- I would not trust it totally.

Sufferers of allergies and asthma who have experienced these positive effects can attest to the fact that negative ions provide exceptional relief. In fact, anyone who has been exposed to a negative ion generator can benefit from these charged particles, just as if breathing in the ocean air.

where the tune is clearly positive and encouraging for the negative ionizers.

Because allergic people are more likely to become depressed, the following findings on seasonal affective disorder with negative ionizer can be interesting

where the sources did not find side-effects due to the small amount of ozone generated by the devices.

Not the answer you're looking for? Browse other questions tagged air-conditioning ventilation health-and-safety or ask your own question.

5
How can I improve ventilation in my room with a window fan while filtering pollen from a nearby tree?
2
Are air purifiers and ionizers effective?
-2
Alternative ways to Cool body in hot apartment with many floors?
2
What methods exist for filtering air to alleviate allergies?

4
What are effective ways to frame a return air duct?
5
What to use to funnel floor air vent in cabinent for proper air flow
1
How do I connect a 24v air purifier to hvac?
2
Should I remove my air conditioner for the winter?
2
Combining Air Conditioner with Air Purifier
1
Mini Split Condenser in Garage? With ventilation?
1
Is it bad to close furnace dampers in order to balance temperatures seasonally?