I am trying to wire a plug into a 6" inline fan for our bathroom but I do not recognise the colours used for the wiring. I am based in the UK.

I've attached an image. Which one is neutral? And I am assuming I can leave off the earth as there's no conductive parts exposed. 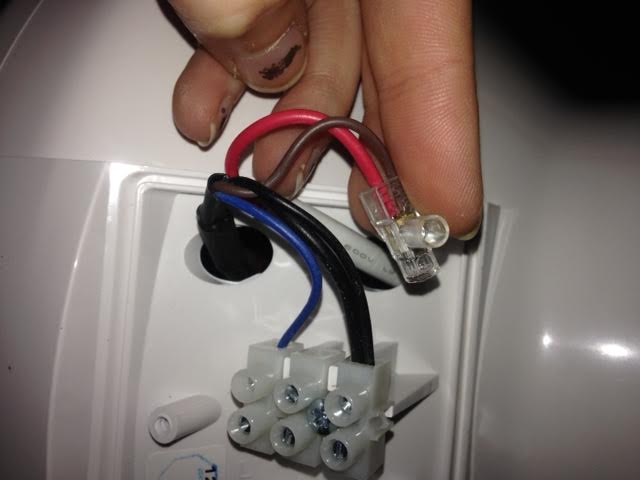 Also, why is red and brown connected off like that? The connector is only 1 way.

electrical wiring
Share
Improve this question
asked May 5 '16 at 12:39

Appliance leads changed colours first, this was so that appliances across the EU all conform to the same colour code. Aiding trade etc.

Later on, in-wall fixed wiring colours were changed. I guess this was deemed less urgent because houses don't get moved from country to country.

The way you phrase this makes me unsure what exactly you are doing.

If this fan is inline in the sense of part-way along an air duct, it should be wired in permanently and not using any kind of plug (as in wall plug that plugs into a wall socket)

why is red and brown connected off like that?

It is unusual for that to be on a separate connector like that, which suggests something odd may be going on.

Normally there is the typical white-plastic screw-down connector block as shown at the bottom of your photo with all the supply connections on one side and all the appliance connections on the opposite side.

Which one is neutral?

Should be blue (appliance side) and black (supply side).

I am assuming I can leave off the earth

It isn't needed for double-insulated appliances (like your fan) but you should terminate it somewhere so that a future householder is able to safely connect a different type of fan that does require an earth.

I do not recognise the colours used

The electricians who put wiring into walls often use standard cabling for the run to and from the light switch etc which can mean that a blue cable acts as a switched-live return from the switch. This should be marked with red tape (or really brown tape nowadays) to indicate it is a switched-live not a neutral.

If in doubt, you'll need a suitable Cat-II (or greater) rated voltage-test device and spend some time confirming what wires do what.

From your comments, what you have are

The last combination is used on three-phase industrial supplies that are rarely seen in UK homes. In that case brown is phase 1 and black is phase 2 (phase 3 would be light-gray). It is exceedingly unlikely that a domestic bathroom fan would use a multiple phase power supply.

If I didn't have instructions for the fan, I'd try to obtain some from the supplier or manufacturer (or intertubes). Failing that I'd break out the suitably rated test tools and try to work it out the hard way.

3
What can I use to manage the wires when replacing a looped ceiling rose light fixture with one that just has loose wires?
4
Why is this ceiling light fixture wired this way?
1
Condensate pump wiring
1
What is causing earth leakage?
0
Ceiling Fan Loose Wires
1
Is this safe extractor fan wires exposed bathroom
1
Fan wiring no switch, only using humidity sensor for control
0
Replacing a light with 2 wires for something that needs 3