What type of beam should be used over a split arch doorway?

I am building a building in Indonesia. It's using RC-frame construction. My builders don't have much expertise, nor do I.

The basis for my building is three reinforced concrete pillars, 30cm * 30cm, 3.5 metres tall, with 4.75m between the pillars.

There is some seismic activity in the area.

What I want, basically is an arched doorway somewhat similar to this: 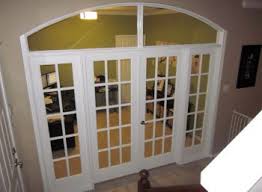 but split into two by the central pillar, so that left and right of the pillar are mirror images.

I then want two windows of similar design (i.e. rectangular with an arch on top) further towards the corner of the building (so not bisected by the pillar).

Which design for the beam makes more sense?

concrete beam
Share
Improve this question
edited May 4 '16 at 16:47

Beams rarely follow curves in cases like this. Put a standard beam at the height of the zenith and frame down to shape the arch, thereby creating the proper rough openings for the windows. Install the center post under the beam.

Not the answer you're looking for? Browse other questions tagged concrete beam or ask your own question.

3
What type of subfloor should be used for Engineered hardwood flooring installed on grade concrete slab?
1
Can a 290mm x 45mm lvl beam be used as a structural ridge beam?
3
What size beam should be used for a 15' patio cover span?
1
Can fill in a doorway opening in a foundation wall over the top of the slab?
2
Should columns supporting a beam be fastened to the floor?
0
What, if anything can you attach to a beam?