Can cable splice devices be concealed?

Devices exist that claim to be able to splice nonmetallic sheathed cables together outside of a box, and in concealed locations. Are these types of devices allowed by National Electrical Code? 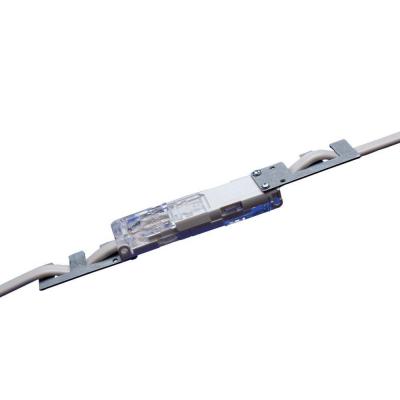 The use of these devices is limited to specific situations, which are described in 334.40(B) of the National Electrical Code. The 2011 version of the code had this to say.

334.40(B) Devices of Insulating Materials. Switch, outlet, and tap devices of insulating material shall be permitted to be used without boxes in exposed cable wiring and for rewiring in existing buildings where the cable is concealed and fished...

Which means the devices could be used in exposed locations, and concealed in existing buildings, but only when fished. Adding the "fished" requirement, meant that the device would not be fastened in place. This would allow for the extraction of the device, for inspection, maintenance, and repair.

In the 2014 version of the code, things changed a bit.

334.40(B) Devices of Insulating Materials. Self-contained switches, self-contained receptacles and nonmetallic-sheathed cable interconnector devices of insulating material that are listed shall be permitted to be used without boxes in exposed cable wiring and for repair wiring in existing buildings where the cable is concealed....

Now the devices can still be used where exposed, but the concealed use has changed. The device can be concealed, but only when used in existing buildings for "repair wiring". Which means that they should only be used where a cable was damaged, and replacing the cable is not practicable.

This quote from the IAEI Magazine article Enter the Nonmetallic-sheathed Cable Interconnector, sums it up quite well.

One of the major things to remember about this product is that the device is for “repair” purposes only. If an electrician has the accessibility and availability to replace existing wiring with new wiring, there would be no need for a device such as a nonmetallic-sheathed cable interconnector.

These devices are listed in the UL White book as Nonmetallic-Sheathed Cable Interconnectors (QAAV).

Not the answer you're looking for? Browse other questions tagged electrical code-compliance splicing or ask your own question.

4
Is there a way to extend electrical wire where the splices can be finished over?
28
Is there a way to simply splice in an additional length of 12/2 NM-B cable?
8
Can I solder 12/2 Romex to extend wire 5 ft?
5
How can I properly remove (not cover) an unused receptacle?
0
Disable electrical outlet
0
How to repair after drilling through an electrical cable
1
How to avoid hidden junction box when renovating a room without breaking adjacent rooms?