Background: A bay window has been having ice dam issues for the past couple of years. I think the water is coming in through the space between the gutter and the fascia. That space is just on the inside edge of the bay window. I see water dripping from that space on each side of the bay window, so I assume it must also happen inside the bay window.

I still can't tell the dripping only happens during winter melt, or also during rain storms. I seem to hear "tick tock" water dripping during rain storms as well, but it's hard to tell, and there does not seem to be enough to cause water damage inside. I got insulation added to the attic, which perhaps improved the ice dam issue a bit (or maybe it was just the weather this winter), but there was still a bit of water dripping from the bay window frame inside the house.

2 winters ago, when the ice dam issue was at its worst, there was a bit of water damage in the kitchen ceiling, which is more or less at the same height at the base of the bay window. 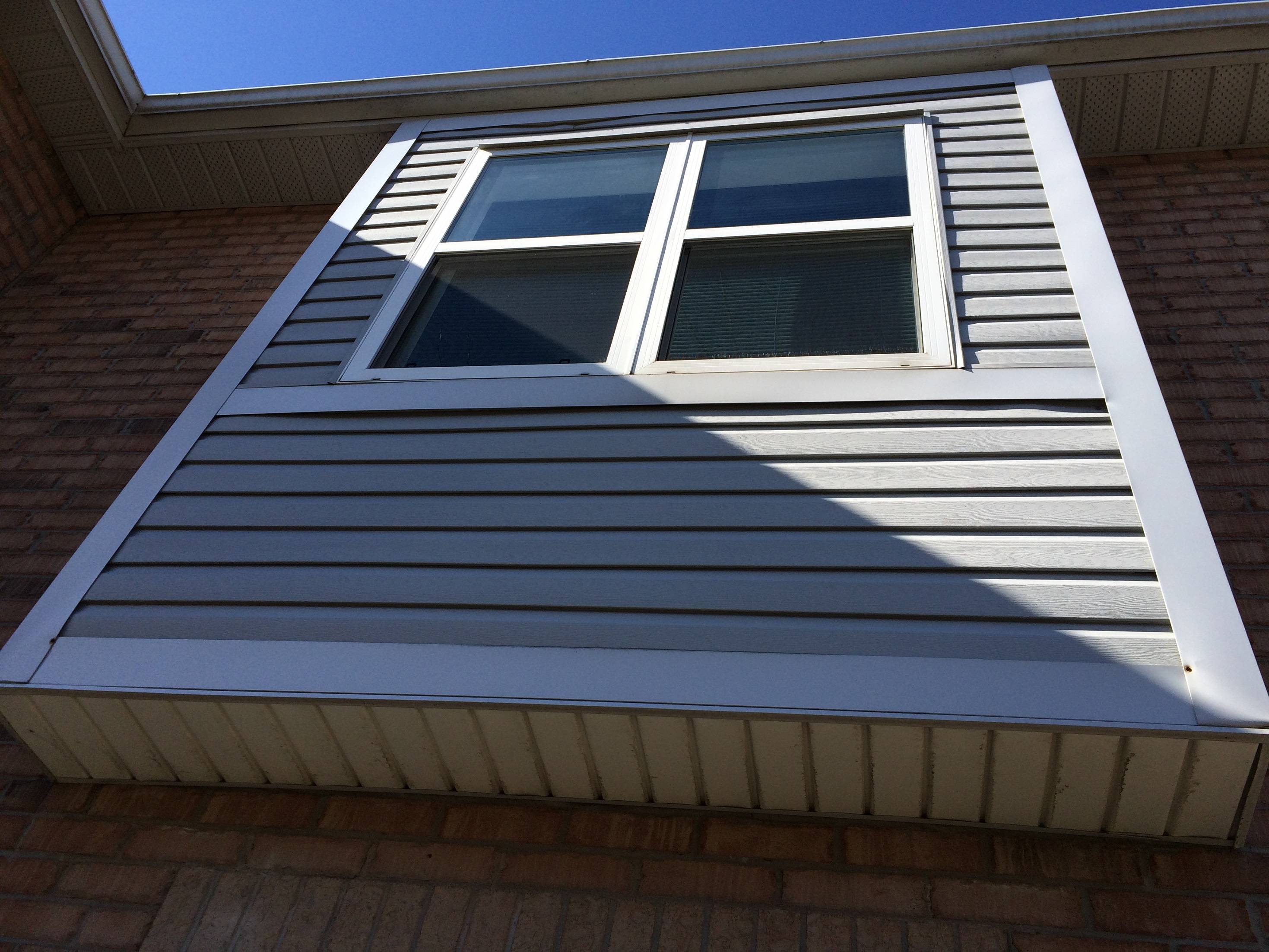 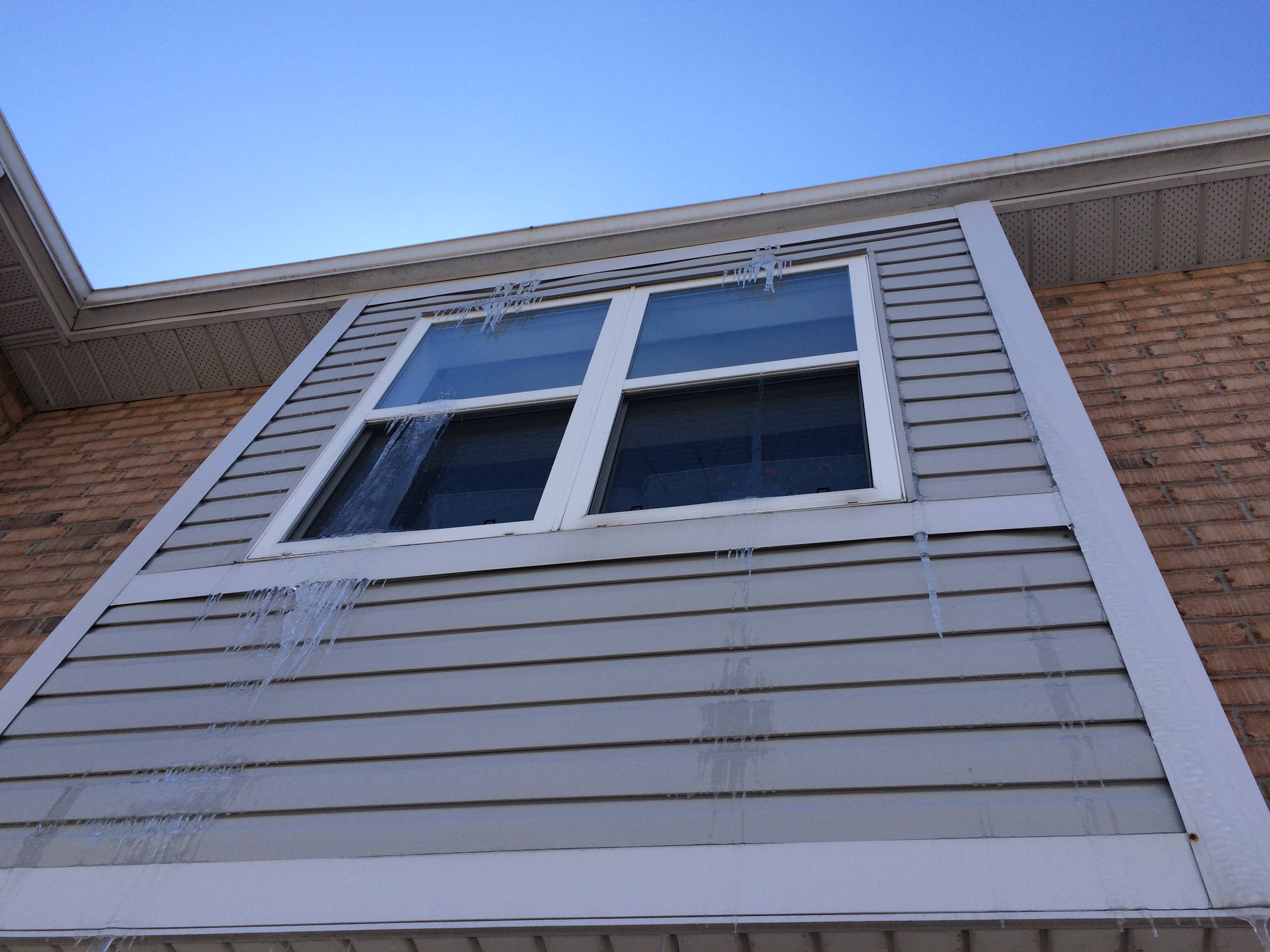 I am getting the siding redone around the bay window (to add flashing at the top of the siding and bigger flashing at the top of the window, which will hopefully prevent water from coming in). Also possibly add insulation (its always cold around that bay window area in the winter). The soffit under the bay window is currently unvented (as shown in the picture). The contractor said there is no need for ventilation there and they usually install unvented soffits.

Question: Should I get vented soffits installed, so that water has an easy way out (instead of going towards the kitchen ceiling?) Could that cause issues, or even if vented soffits do not do anything, they at least won't do any harm?

Vented soffit below the window will allow air in, and will reduce the effectiveness of insulation. Other than that, it wouldn't cause a problem, but you're already concerned about the cold near the window.

You should focus on how the water gets in, and prevent that from happening in the first place. It should be fairly easy for your contractor to tell what's been happening once the siding is off. It's hard to tell how things were flashed around the window from your pictures, but it doesn't look like how I'd have done it.

When you have an ice dam, the real concern is water being pushed back up under the shingles. If that's happening, water could be dripping down the internal structure, and vented soffit below the window wouldn't help anyhow. Again, it should hopefully be easy to tell once the siding is off. If you haven't already, mention the water in the house to your contractor, and show them where you've seen it.

Not the answer you're looking for? Browse other questions tagged insulation windows soffit flashing or ask your own question.

1
Clarifying the in-between rafters insulation
1
Leak above window during rain, is this caused by a masonry drainage problem?
2
Replacing rotted out window sill in basement block wall
1
Sealing metal siding against window j/c channel?
0
Possible leak from upstairs window into downstairs window
3
Insulating under a bay window
0
Water dripping from soffit - problem with the gutter, roof, or something else?
0
Should an exterior surface-mounted outlet box on wood lap siding be flashed?
0
Why are my gutters allowing water to drip off the fascia and soffit?