The house has the original galvanized piping in the crawl space and suffers from low water flow in two bathrooms. Static pressure measured at an external hose faucet near where the service line enters is 80psi so pressure is not a problem. The kitchen, which is next to the service line entry, does not have a flow problem

The home inspector suggested the galvanized pipe is near the end of its service life. An additional factor is that that the previous owners did a major remodel of the kitchen and both bathrooms 5-7 years ago and installed copper risers (yay, no sheetrock tearout to repipe) but the contractor didn't use dielectric couplings, which could have accelerated corrosion in the galvanized pipe near the joints. When I replaced the shower heads I found some black crumbly granules in the old shower heads, and also in a sink aerator.

We have decided to replace the galvanized pipe with PEX, and there is some disagreement among contractor bids about the necessity of replacing the galvanized service line from the meter to the house. One contractor thinks it is not necessary.

If you're re-piping your house and don't mind them digging up your yard, a water service replacement is a good idea. It should be cheaper to do it all at once rather than to do them as two separate projects.

Galvanized pipe can last a long time, without "failing". However, while the pipe might look great on the outside, the inside is likely restricted by corrosion and deposits. All galvanized pipe I've ever removed, looks something like this on the inside. 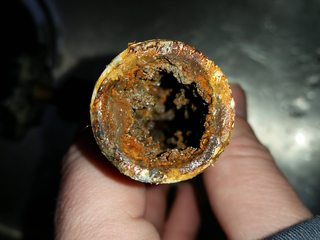 My advice to anybody that still has galvanized pipe in their homes, is to replace it as soon as possible.

Galvanic corrosion occurs when galvanized steel is in direct contact with copper and creates pin holes in the copper from the inside out. Copper does not degrade the steel pipe. What does happen inside the steel pipes is rust/mineral deposits form on the interior walls much like arterial buildup in a human being restricting your water flow. Because the buildup increases as water velocity decreases, you end up with a situation like yours where the plumbing fixtures near the water supply entry having a higher gpm than the fixtures further away from the entry point (the actual physical distance between the entry point and fixtures is irrelevant, the determining factor is the length of pipe between the two points).

Unfortunately, I'm in the southeast so I can't offer an opinion on the cost of the quote as we have completely different geological conditions and building practices.