What's the deal with half-walls behind the kitchen cabinets? Can I cut into it?

So I've recently moved in to a new house and the kitchen has two "blind cabinets" but no real good place to put my cat's food and water where it will be out of the way. So I got this brilliant idea that I could partition one of these blind corner cabinets and use the half that I wouldn't be able to reach very well as a feeding station. That cabinet butts up against a sort of half-wall at the back of the line of cabinets with the sink and I thought it might be possible to cut a hole in that drywall, then through the back of the cabinet to make an opening. I can take some photos later, but here's the kind of wall I'm talking about: 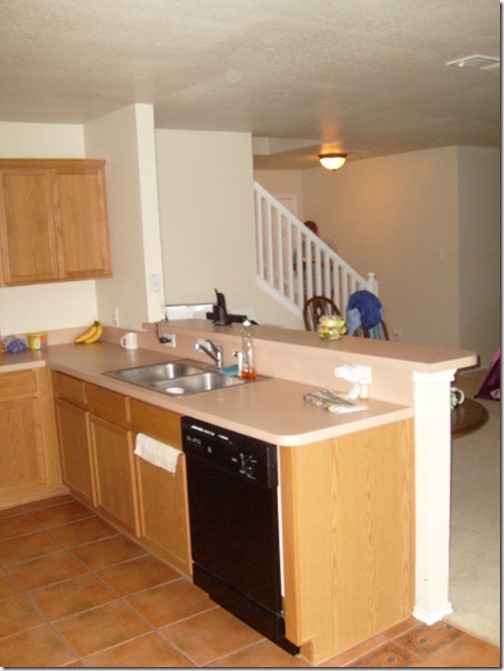 It's like this but not raised; it's flush with the countertop which just extends out a tad bit.

Long story short, I had a handyman over for something else so I asked if he could do this (I knew there were wires back there so I thought I would ask a professional) and he said sure no problem and knocked a hole in the drywall. Right into a stud. Which he didn't check for beforehand. So then he's like, I have to move this stud no problem. Blah, blah, boring events happen and I tell him not to come back because he seriously screwed up this other project I had hired him to do. So now I have a hole in the drywall and cuts in my cabinet back. There are also cuts into the stud but it's not completely severed.

And so that is the state my kitchen has been in for a few weeks as I try to figure out what to do next. My first thought is to just patch the drywall and move on with my life. On the other hand, I would really love to have that little nook so I don't have to step in my cat's food and water all the time.

I don't know a lot about studs and even less in this case...is that thing possibly holding important things up considering the countertop is mostly resting on the cabinets? The handyman apparently felt it would be trivial to move it but I don't really trust his judgement anymore.

What can I look for for clues to find out if this is a possibility? How much work does it sound like it might be? Should I patch it and move on? I think I'm a reasonable type of person.

Also, if you're having trouble picturing the feeding station, I was envisioning something like this (but not with bowls built in, just the nook part): 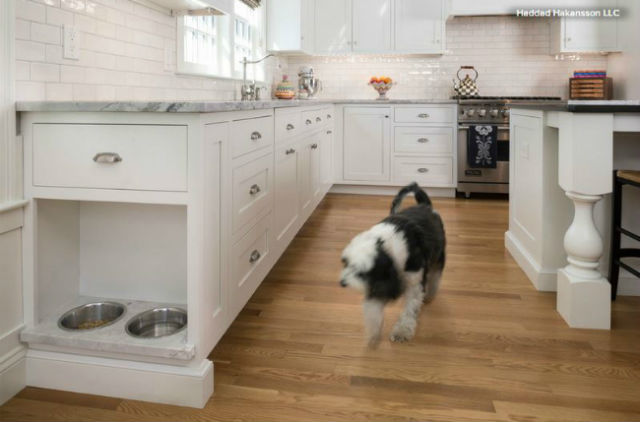 Aside from electrical and plumbing interference, you can do pretty much whatever you want with the framing. That wall is mostly decorative (it saved some money by not requiring the cabinet makers to finish the backs of the cabinets).

If you have smooth walls, open the drywall enough to work. Frame in your opening, replace the drywall, add corner bead or wood trim, and line the opening however you had planned.

If you want more specific help, strip out the kitchen's life story up there in your post, put up a photo of the actual project area, and we'll do our best.

Not the answer you're looking for? Browse other questions tagged drywall kitchens framing or ask your own question.

3
Can I remove one side frame of the cabinets above the refrigerator?
1
How should I mount my wall cabinet by this pipe
3
Are there any concerns installing kitchen cabinets set away from the wall?
1
Can I mount kitchen island countertop supports to the cabinet back panel?
0
Is it viable to vent a range hood back into the kitchen?
2
Insulating Behind Completed Kitchen Cabinets
0
Installing tiles in a basement kitchen on concrete floor, existing kitchen in place, how can I tile under the existing cabinets?