How can this panel pull 100A without any breakers tripping?

The breakers are installed as follows:

What am I missing or misunderstanding? How could none of these trip while the 100A tripped? If this is impossible, what should I look for in terms of failures that might allow this situation to occur (i.e., bad breakers, weird loads, etc)

The main panel has four wires coming in, and the subpanel is connected directly to the white wire shown with two wires, one being smaller than the other which I assume is ground. The other three wires are connected to the 100A breaker. 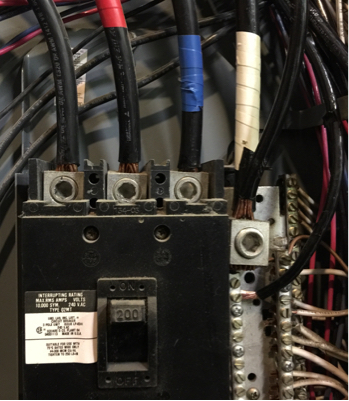 It could have to do with the trip curves of the breakers, and/or the ambient temperature differences between panel locations.

For example, if the 100 ampere breaker is operating at 140°F ambient, you might find that it actually trips at only 85 amperes.

When breakers are installed at higher altitudes, the current has to be adjusted due to the reduced cooling effects of the thinner air. According to the documentation I could find, the adjustment multipliers are as follows:

Though in your situation, the breakers are likely all installed at a similar altitude. So this it likely not the problem, unless the air near the main panel is significantly thinner for some other reason.

Breakers trip on overload or short circuits. A dead short could easily trip a main breaker.

Could be something as simple as a short between the 100A breaker and the subpanel. Have you inspected the entire length of the wire for e.g. signs of rodents chewing on insulation?

Also, your photo is unreadable and all I can tell is that you have four breakers, one of which is single-pole and I'm not clear about the others. What are the ratings and phase assignments of each breaker?

1
Am I likely to be able to run a circuit from this panel for an EV charger?
0
How many amps can this breakers box provide?
2
After a minute running, dryer trips main breaker outside the house, but no internal breakers
1
Loads for sub panels from 150A split-bus main panel
4
How to find out what breakers are compatible with my panel?
0
home not getting 220v
1
How many subpanel breakers can a single piece of main breaker/bus support?
0
Seeking advice on how to rearrange existing breakers and add 2 circuits, including a 20A GFCI/AFCI breaker in a split-buss GE panel