How to seal PVC-U and copper pipes together 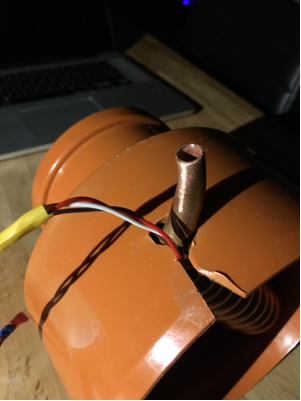 What is the best way to do it? Is there any special PVC mass / epoxy suitable for that?

At the moment I used tick layer of white silicone and it stills cures (after 15h) and not sure if it was a good idea in the first place: 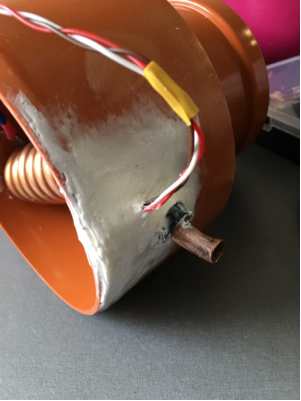 I too have struggled with gluing copper and PVC for certain experiments. Silicone is an ok choice, depending on the pressure, but white silicone just happens to be less effective for sticking to stuff than clear silicone... I don't really know why, I just know that it is.

It's kind of too late to use anything else now that you put silicone on it (actually PVC cement seems to stick to silicone, but it's a poor glue overall); but chances are the white silicone will separate or peel off after a while. If (or, after) that happens, you will have another chance to use another glue. The main thing to be concerned with is gluing to copper. I think that Just for Copper epoxy would be a better choice. I have not used this before, but based on round-about experience, I think it would be good to try. In general, copper oxidation (patina) is a problem for glue on copper (in the long run). Gluing to PVC is probably not going to be as much of a problem... at least for most kinds of glue, silicone, and/or epoxy. Maybe the the answer is to use something like a copper putty to adhere to the copper, then use silcone or another epoxy to join the PVC to the copper epoxy.

Something else that might help would be to use a piece/sheet of plastic or rubber over the area (like a shield). Use something, in which you can cut tight, accurate holes to help seal the deal. Some plastics don't stick to some epoxies. So if you decide to try this, test the plastic for compatability first.

Edit- See where I think a weak spot could be; unless maybe another pipe is inserted which helps support this area. 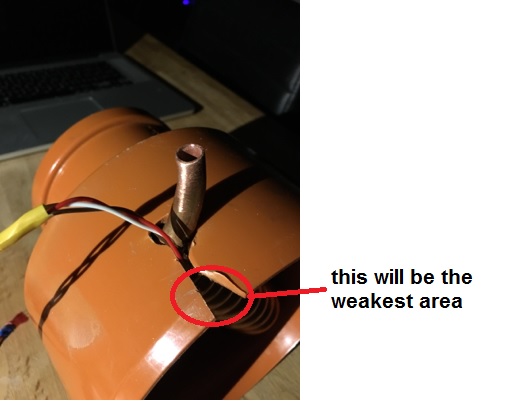 I see that you have a copper tube coil inside that enclosure. My guess is that the experiment you are trying to accomplish requires that to be copper? If so, is there a reason that you couldn't transition away from copper to PVC inside the enclosure?

If that is an option, then you are left with sealing PVC to PVC which is much easier.

Of course, you would still have to address the weak point that Ben Welborn mentions in his answer.

Not the answer you're looking for? Browse other questions tagged plumbing adhesive pvc copper copper-tubing or ask your own question.

1
Can I replace a section of copper pipe with flexiable PVC?
5
How do I realign copper water pipes after cutting?
0
How to seal new PVC to old Lead pipe "toilet bend"
0
Why multiple copper tubes joined together?
3
Utility Sink and Washing Machine Drain Pipe
2
Pros and cons of coupling vs. threaded when transitioning from copper to PVC
1
PVC Pipes And Pool Solar Heating Advice
1
How to seal a pipe pass-through in a basement wall
1
Water leak at outside copper-PVC pipe connection