Washer and dryer in a recessed nook - how do I support a countertop above?

So I have a recessed nook about 64" wide and 30" deep (it fits my washer and dryer side by side, plus a 6" narrow cabinet pull-out). I'm planning to have a (probably quartz) countertop installed. 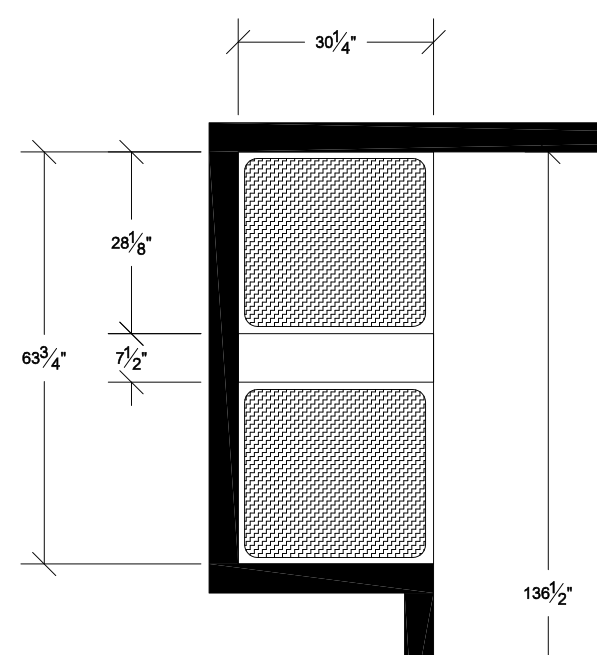 I presume attaching some wood to the walls to serve as cleats is going to be needed. What is unclear to me is exactly how substantial those cleats need to be. Naturally, I'll do the thickest wood I can fit without causing fitment problems for the washer/dryer, but it's going to be tight enough that I'd like to know how skinny I can go with the cleats before I start running into problems.

Right now it looks like I have, at most, 3/4" of clearance on either side between the wall and each respective appliance. Can I do 1/2" thick cleats on the sides (maybe thicker against the back wall since I'd have the space)? Are the countertop guys going to show up and laugh at me, or does this sound viable?

The countertop guys will laugh at you if you want to span quartz over a 5' span. Basically quartz and granite can barely span a dishwasher width - meaning we get buy with not having plywood over the counters. And that is given nothing heavy is stored on it on that section. Given you will have a washer and dryer below it, I would protect it. Since if a washer or dryer was jerked out of position it could nick or crack the slab.

So I would basically frame out the area. Cleat on each side - 2x4, then 3 2x4s going the width with one in the middle. Then a think piece of plywood on top (3/8"). You can then install decorative trim on the front panel and since you used a 2x4, the big box stores will have lots of choices. Total cost is about $25. *You can also just face it with a nice wood veneer.

When the installers come they can just glue it to the plywood - they don't have to overdo this as a couple of dabs will do. The same principle should be used for the 2x4 framing under. Meaning if you need to move the quartz up or down or where ever later it should just take a few minutes with a putty knife. I am sure there is plumbing in that wall and you don't want a shelf you can never move.

Also a couple of notes here:

Not the answer you're looking for? Browse other questions tagged kitchens kitchen-counters countertops or ask your own question.

2
How to polish Corian countertop?
0
How to fix a chipped countertop
0
Gaps between granite countertop and plywood base
1
Outdoor kitchen countertop support
1
Why does this kitchen receptacle located on the far side, away from the sink, need to be GFCI?
1
Identifying countertop material and removing mug rings
2
What type of material is my countertop made of and how should I clean/maintain it?
1
How to mount butcher's block counter above washer/dryer?
2
How do I support a granite countertop over a dishwasher?